Domestic Violence against Men is not legally recognised in India.

by Team VFMI
in DOMESTIC VIOLENCE, GENDER STORIES, HIS STORY, IN THE NEWS, IN THE SOCIAL, SPEAK UP MEN
0

Domestic Violence against Men is not legally recognised in India. Even in 2022, we want to believe that Women are the only victims and Men are the eternal abusers.

In a recent case from Karnataka, a social media user named Yadunandan Acharya tweeted an image of his injured hand and tagged Prime Minister Narendra Modi. He wrote,

Would anyone help me? Or did anyone help me when this happened? No, Because I am a man! My wife attacked me with knife, Is this the naari shakti you boost about? Can I put a domestic violence case against her for this? No!

Would anyone help me? Or did anyone help me when this happened?
No, Because I am a man!
My wife attacked me with knife, Is this the naari shakti you boost about? Can I put a domestic violence case against her for this? No!@PMOIndia @KirenRijiju @NyayPrayaas@CPBlr#MenToo pic.twitter.com/VNqtTQ5kPK

Yadunandan, a resident of Bengaluru, has sent his grievances to the PMO through social media.

When Bengaluru police asked for details of the case via, Yadunandan share another screen shot as below.

The victim husband shared his DM message dated May 4, 2020 when India was under its first lockdown. Since the post went viral, Bengaluru Police Commissioner asked him to visit the police station and seek legal action and address his grievance.

Yadunandan Acharya’s tweet once again raises concerns about one sided narratives on Gender Based Violence in society. Over the years, mainstream media has rarely brought out stories of Men facing violence at the hands of their wives and it is only now due to presence of social media, that allows the Other Side to be revealed in society. 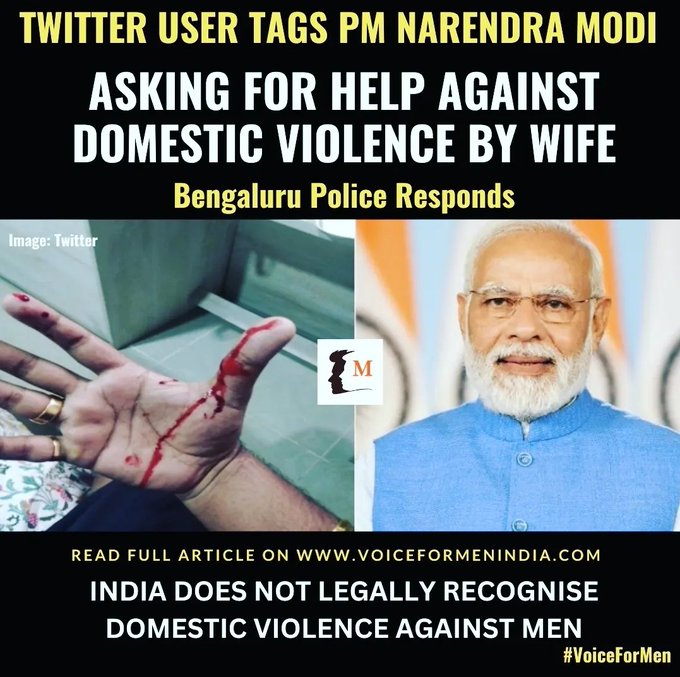 “I Am Victim Of Domestic Violence; Not Allowed To Meet My Twin Sons” | Bollywood Singer Kshitij Tarey On Bitter Divorce Battle

A RARE ORDER FROM JAMMU COURT