Crime Has No Gender. Husbands also face extreme forms of Domestic Violence by Wife & In-laws. However, in the absence of English media giving any space to such reports, society is made to believe that woman is always a victim, while man is always the perpetrator.

In one such horrific incident reported from Sitamarhi in Bihar, a husband faced an acid attack from his wife during ongoing matrimonial dispute.

Nageshwar (victim husband) had a love marriage with Parvati Kumari 10-years-ago. The couple has a son.

The relationship between the two soured over the years and 15-days ago there was a fight between husband and wife over Rs 2,000. After this, the woman left her matrimonial home and returned to her parents.

On Tuesday, Parvati asked Nageshwar to come to her maternal home where she had been living since a fortnight. When the husband reached here, he was beaten up and attacked with acid, after which he lost his eyesight. Nageshwar’s condition remains to be critical.

32-Year-Old Nagpur Woman Attacks 25-Year-Old Lover With Knife After He Refused Marriage | No Means No?

The local police was informed about the incident at around 9pm on Tuesday after which Nageshwar was shifted to PHC Hospital in Riga. The condition of the husband was critical, thus he was subsequently taken to Sadar Hospital.

Nageshwar’s family reach the hospital on receiving information about this attack. SHO Ram Iqbal Prasad informed media the ‘they were investigating the matter’.

As per media statement given by Vikas Singh, victim’s brother, Parvati had called her husband to her home. When Nageshwar reached his in-laws’ place, he was beaten up with a stick and attacked with acid.

Acid Attack On Men In India

Contrary to the media hype that only women fall prey to acid attacks, according to National Crime Record Bureau (NCRB) over the years, more than 30-40 per cent of acid attack victims are men.

Through his PIL in 2018 to address all victims of acid attack equally, irrespective of Gender, Chandrahass Mishra, acid attack survivor said,

Supreme Court framed guidelines for all victims irrespective of gender. It is the government authorities who made rules gender discriminatory. 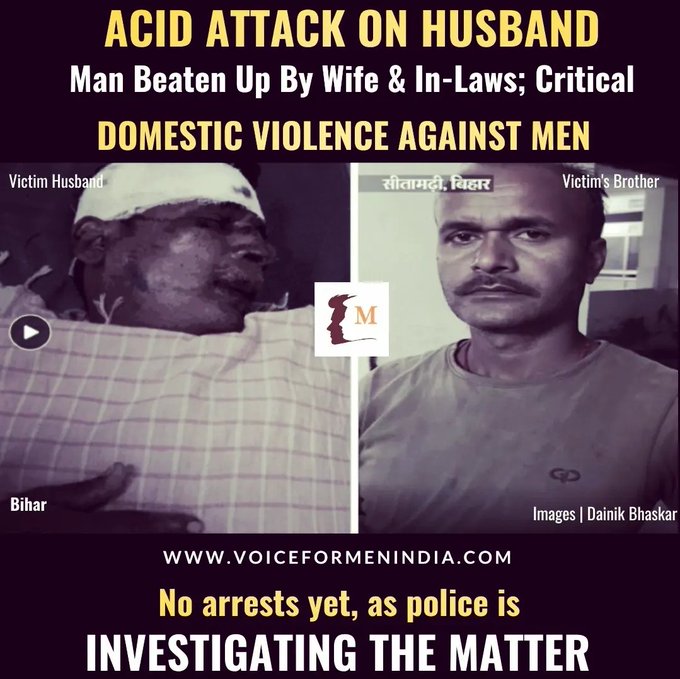