by Team VFMI
in CRIME HAS NO GENDER, IN THE NEWS
0

The aspirations of being called an NRI, are still deeply rooted in our culture and many often adopt all possible tactics to avail a foreign citizenship. The most common method of moving abroad is by way of marriage to an NRI man or NRI woman. The local spouse will have an agreement by paying money to the NRI spouse and after receiving citizenship in a different country, the two will divorce each other mutually.

The state of Punjab was once notorious for NRI grooms cheating local women and deserting them after marriage. While such cases are still reported, the women of Punjab have been equally involved in cheating, forgery and misusing laws to defraud men after marrying them. Many vicious women, including their families, are making big profits by taking this short cut.

Great work @NCWIndia, Women In India do have a recourse. But @narendramodi sir, in case Men are facing harassment, domestic violence, stalking, threats of False cases, which Commission can they contact? 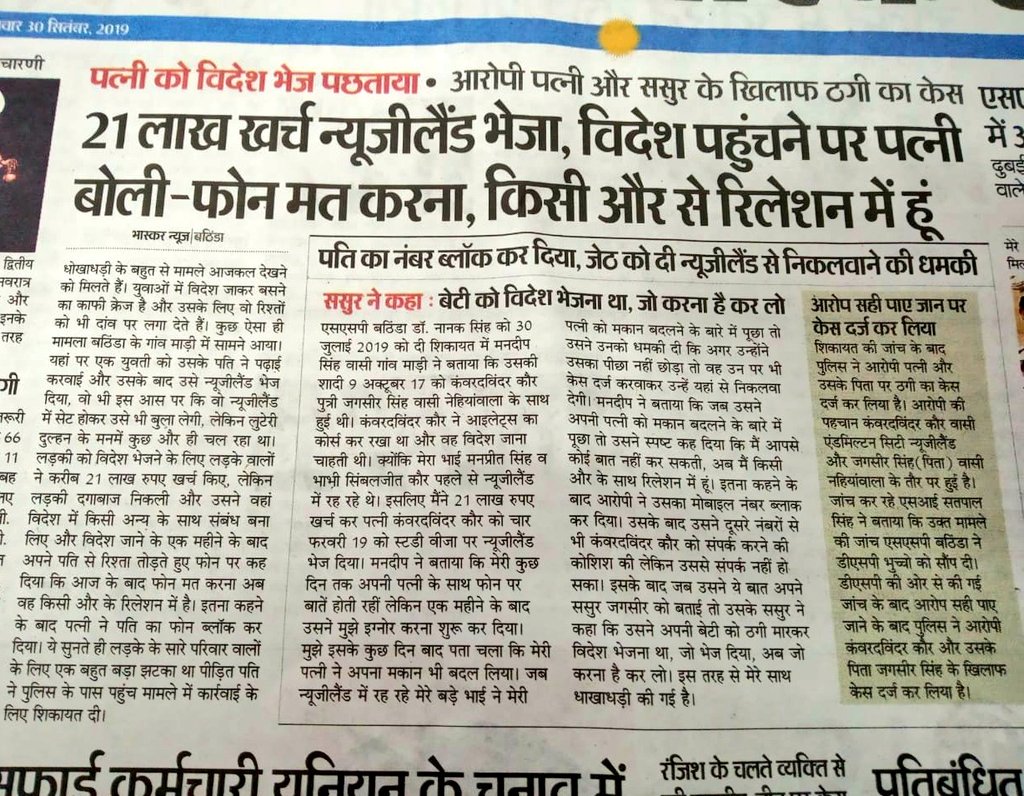 The police started their investigation and registered a case of cheating against accused Kanwar Davinder Kaur and her father Jagseer Singh, after receiving a complaint from Mandeep. Incidentally, there are several such cases of fraud pending in the NRI cell of Mohali.

Prospective grooms of well-to-do families, who are weak in reading and writing, are being cheated regularly by women after marriage, most commonly with the threats of fake and fabricated domestic violence or dowry harassment charges. The Punjab Women’s Commission has come across many cases of this type of cheating when the girl has adopted such a method to go abroad and later changed the behaviour after reaching the foreign land.

Passports of 8 NRI husbands cancelled for abandoning their wives

Earlier, NRI grooms used to cheat the innocent brides of Punjab in the name of marriage and now the brides of Punjab are cheating their grooms. This in no way should be laughed off as a tit-for-tat or Equality of the Sexes. While India has a National Commission For Women (NCW), who tracks record of NRI brides being cheated, there is no commission for Men that can also account for such fraudulent cases on the other gender.

Such one-sided data, only projects Indian men as the monster and Indian women as eternal victims.

After our story went viral, wife Kanwer Davinder Kaur has reached out to Men’s Day Out and below is her side of the story. Davinder claims that she was in love with Mandeep for nearly six years and the marriage did not take place because of any visa attraction.

She further claims that Mandeep’s sister-in-law wanted him to marry her younger sister, and thus resorted to tarnishing Davinder’s image. The wife who is now in New Zealand, alleges that when she denied sending any money to Mandeep’s family back in India, sister-in-law fuelled her husband with the story of affair with her fellow student.

Davinder also states that she wanted her husband to join her in NZ, however, his sister-in-law asked him not to come, else his wife would have got him jailed.

It is only fair for us to project both sides and leave it to the readers to form their own opinion. All we can conclude is, it is only the husband and wife responsible for the success or failure of their marriage and trust plays a very important role in the same.