by Team VFMI
in DOMESTIC VIOLENCE, IN THE LAW, IN THE NEWS, OTHER COURTS
0

Women centric laws were made in India to protect the alleged ‘weaker sex’ from any harassment or domestic violence from husband and in-laws. However, over the years/decades, in the absence of tweaking laws with the current times, several women are misusing the loopholes and approaching court for (monetary) relief.

In one such bizarre case, the Magistrate Court in Mumbai has refused any relief to a woman who went to court after 32-years of separation from her husband.

Couple was married in 1987. The woman approached court in 2021, where she accused her husband and in-laws of allegedly driving her out of matrimonial home in May 1989.

The woman even contended that there is no limitation period to claim relief under the Domestic Violence Act.

The Magistrate Court in Borivali refused to grant relief to this woman under the Protection of Women from Domestic Violence (DV) Act citing a delay of three and more decades.

The Court noted that the domestic relationship between parties had ceased to exist 32 years and six months ago. Thus, the Court said the woman is not at liberty to sue the respondents as per her whims at any time. The Court remarked,

It is clear that the two parties have not resided in a shared household since 1989, so the allegations of domestic violence are “absolutely remote in time”.

With regards to the lapse in time, the court said that not having a prescribed period of limitation does not mean that the woman is at liberty to sue the respondents as per her whims at any time. The Court added,

Had it been so, there would be no end to such litigation.

The Court held that the plea had not been instituted within reasonable time.

LEAVE YOUR COMMENTS BELOW ON THIS CASE:

▪️Woman contended that there is no limitation period to claim relief under the Domestic Violence Act@narendramodi @AmitShah @KirenRijijuhttps://t.co/H8nNWldTlK 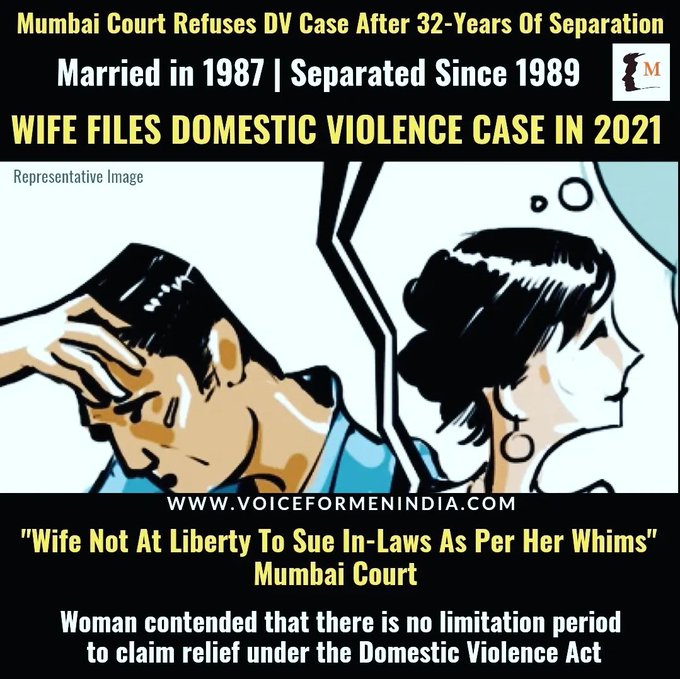