by Team VFMI
in CRIME HAS NO GENDER, IMPACT ON CHILDREN, IN THE NEWS, NON TIER-I CITIES
0

When God could not be present everywhere, he made a Mom! That’s the generic statement we all have been raised with. Of course, by far there is no substitute for both parents in one’s life, however, no one should be given benefit of doubt just because she is a mother or because of her Gender.

In one such case reported from Gurugram, local police arrested a woman and her two associates on Sunday on charges of allegedly kidnapping two minor girls. Out of the two girls, one happened to be the daughter of the accused woman.

On Friday, Gurugram police received a call about the abduction of two minor girls – 9-years and 14-years – from Ekta Enclave area in Bhondsi. The kidnappers had demanded a ransom of Rs 50 lakh, reported Indiatimes.

A case was registered at the Bhondsi police station and a team was constituted to trace the girls, who were rescued from Hero Honda Chowk.

The police said that the accused were identified as Rinki, Sagar, and Vikas. Rinki, who was the mother of the 14-year-old, was the mastermind behind the incident.

During the probe, the police learnt that the Rinki and complainant mother (of 9-year-old girl) were known to each other. Rinki had borrowed around Rs 26 lakh from the complainant mother. The police confirmed that the accused mother kidnapped her own daughter as well to avoid suspicion. Speaking with media, officials stated,

Rinki hatched a conspiracy to kidnap the 9-year-old girl along with her daughter so that no one can suspect her. She, along with her accomplices – Sagar who worked as her driver and Vikas aka Suraj who worked at her dhaba, planned to kidnap the girls on the night of a kirtan programme organised in the house of complainant to which Rinki was also invited.

As per the plan, Rinki attended the kirtan programme during which the victim was lured out of her house on the pretext of buying ice cream. Outside, Sagar and Vikas were ready with a car to kidnap the victim. When both minor girls went outside for ice cream, they were taken away.

The accused have been sent to judicial custody.

CRIME HAS NO GENDER

▪️Police: "Rinki (mother of 14-year-old) was mastermind behind kidnap, since she borrowed Rs 26L from complainant"https://t.co/CBxuA443C7 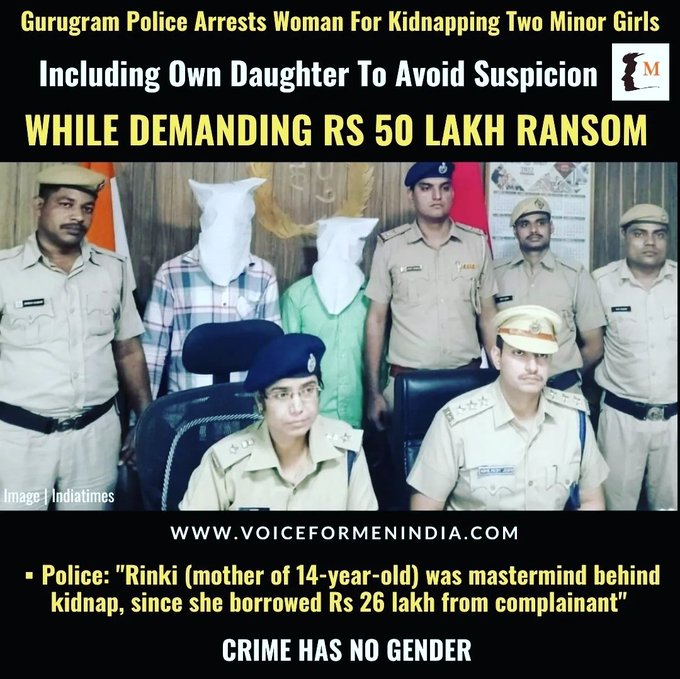