by Team VFMI
in IMPACT ON CHILDREN, IN THE LAW, IN THE NEWS, SUPREME COURT, Uncategorized
0

The Supreme Court on Tuesday directed a warring couple – who have been making all sorts of allegations and counter allegations against each other while fighting over custody of their minor daughter – to undergo psychiatric evaluation.

Both the estranged husband and wife have been directed to appear before doctors at the Hospital for Mental Health in Ahmedabad For Counselling.

A couple from Gujarat have been fighting a bitter legal battle for the custody of their three-year-old daughter. Both sides have been making all sorts of allegations and counter allegations against each other.

In August, the apex court directed for medical evaluation of the wife after serious allegations were levelled against her. After getting a report from the medical board of Vimhans in Delhi, the top court allowed her to spend time with the child at any public place for four hours in a day.

Wife is suffering from mental imbalance, due to which she is unable to take care of their child.

A family court had allowed the husband to take custody saying the wife couldn’t take care of the child because of the lack of problem of her “mental balance”.

The Gujarat high court though set aside the order refusing to accept the plea that she was suffering from mental disease. It then said,

Since conceiving, at the birth of child and bringing the child up jointly, there is no such conduct or behaviour alleged or proved by contemporaneous record except motivated documents in the form of CD / photographs, produced just with a view to prejudice the mind of court.

A bench of Justices K M Joseph and B V Nagarathna directed the couple to appear before a panel of doctors on December 19 for psychiatric evaluation. The report will be considered by top court before taking a call on custody dispute. The Supreme Court passed the order on an appeal filed by husband challenging the Gujarat HC order granting custody of their daughter to his wife.

The bench made it clear that, if needed, the court would take custody of the child and pass an appropriate order to ensure her welfare. As both parties failed to take a middle ground and kept blaming each other for disturbed married life, the bench said they first needed counselling. The Supreme Court thus ordered,

Both of you require psychiatric evaluation and counselling. You are destroying the child’s life and both of you need to be counselled on how to live like husband and wife.

It directed the medical superintendent of the hospital to assign a doctor or a panel of doctors to examine them. However, the lawyer, appearing for the wife, submitted that they be sent to some other hospital as her husband has a link in that hospital.

The bench then directed the medical superintendent to ensure that doctors who had earlier treated them be not made part of the panel.

▪️SC: "You are destroying child’s life & both of you need to be counselled on how to live like husband and wife"#SharedParentinghttps://t.co/LMxMP36dTs 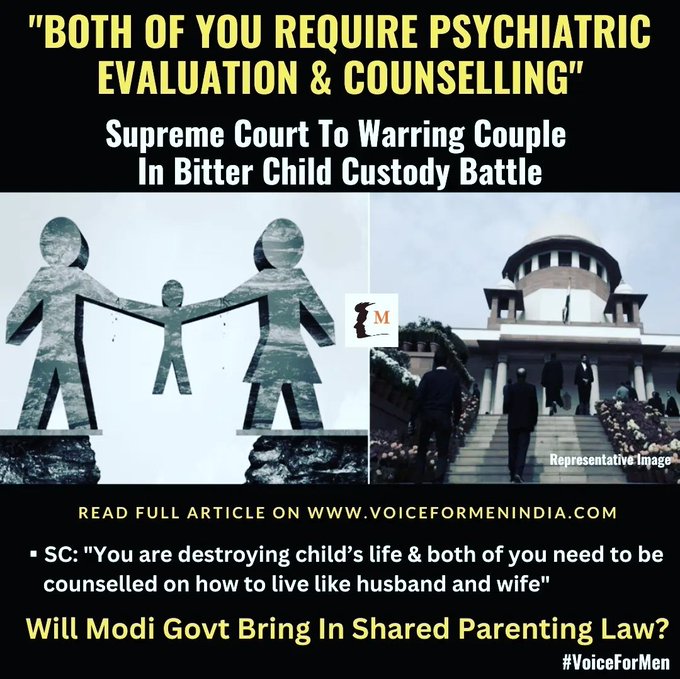 Survey Of 500 Separated Parents | How Did Judiciary Respond To Child Custody Cases During Pandemic?

Dear Son, You Would Have Lived Your Life With Single Mom, But Your Father Was Not Evil | Father’s Day 2021