In yet another tragic incident, this time reported from Ludhiana, Punjab, a married man has ended his life, leaving behind a suicide note accusing his wife and in-laws of harassment and parental alienation.

The incident pertains to Bhamian village of Jamalpur.

Deepak Jacob used to work at a factory and was disturbed due to constant fights with his wife. Deepak ended his life after his wife left home with their 2-year-old daughter and did not allow him to meet with his child.

Adding further, Deepak named not just his wife and in-laws, but also a ‘friend‘ of his wife responsible for him taking this step.

One of Deepak’s cousins informed police that there was a rift between Deepak and his wife over some issue after which the wife left home with their daughter. The cousin also said that Deepak had become mentally disturbed because he was very much attached to his daughter.

About two weeks ago, Deepak went to his in-laws’ house and brought his daughter back. Two days later his wife came along with the police personnel and took her daughter back. Disturbed by his wife and in-laws’ behaviour, Deepak hanged himself.

The matter came to light when Deepak’s mother knocked on the door, but no response. The neighbours were called in who broke open the door, where they saw Deepak’s body hanging.

The police was called in immediately and the body was sent for post-mortem at the Civil Hospital.

SHO Inspector Bikramjit Singh of Jamalpur police station informed media that following the statement from Deepak’s father, the police has registered a case against his wife, brother-in-law and other relatives under IPC section 306 (abetment to suicide). Raids are being conducted to arrest the accused.

"About 2-weeks ago, Deepak went to in-laws' house & brought daughter back. 2-days later wife came along with police, took her back"https://t.co/JQrTZEsOgL 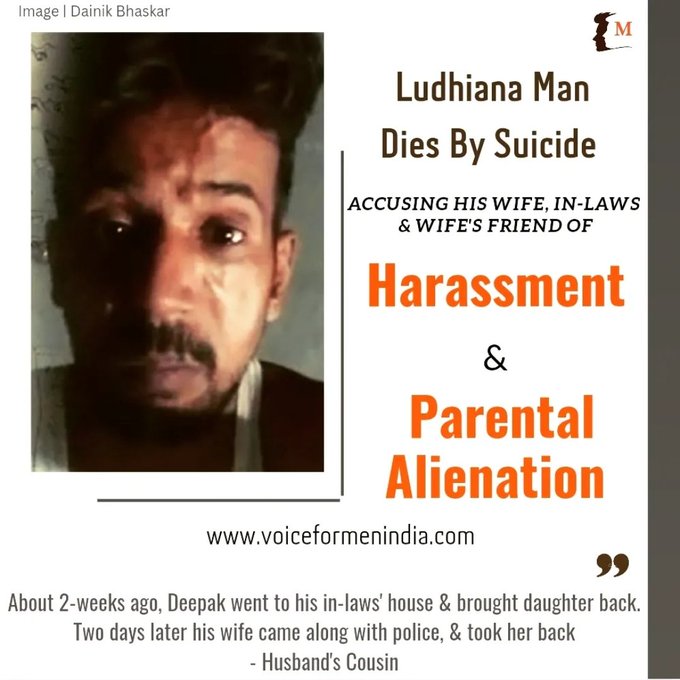