by Team VFMI
in HIS STORY, NON TIER-I CITIES, SPEAK UP MEN
0

Divorce happens between husband and wife, but why are children used as collateral damage in a matrimonial battle? Its 2022, and Indian laws still consider Mothers, as only capable guardians of children.

Even if we argue with the logic, that infants need a female parent more for nourishing needs, why should a father be turned into a criminal, who is not even allowed to see his child?

Embossed with their children’s photographs on T-Shirts, a group of 30 Separated Fathers took part in a rally from Bhubaneswar to Puri on Friday. These Men marched with a hope to meet their kids soon, and also to create awareness to ensure other fathers in future, do not face such harsh and unjust treatment from the system.

Voice For Men India spoke to some of the members who participated in the walk and here’s is what they had to share.

Lord Jagannath goes to aunt’s (mausi) place and comes back on bahuda jatra (return festival), thus, we as aggrieved fathers, went on #HopeWalkToPuri to pray, cry and question Lord, that, while you returned, why have our kids not returned to us yet?

Its a prayer walk, for the sake of our children. We hope someone listens to our cries as fathers.

I want to hug him and give him all the happiness in the world.

Sanjeev Panda, another father from Odisha, who has been alienated from his son expressed to us,

Why is a father treated like a prisoner, who is given visitation of just 5-10 minutes with his own children? Forget a father, why are rights of a child ignored and sabotaged by not allowing them to get love and affection of father.

Aren’t our courts making our children semi orphan, despite their fathers being capable, willing and alive.

Adding further, Panda referred to The United Nations Convention on the Rights of the Child (UNCRC), and stated,

It is unbelievable that the law makers and judiciary do not know or understand that depriving love and affection of either parent is a violation of basic human rights of a child. It won’t be wrong if we say children’s rights are being ignored and we are leaving them to be exposed to Parental Alienation Syndrome (PAS).

If we really care and want to put interest of our children first, India must progress and adopt Shared Parenting as a practice in all divorce matters. Currently, whenever there is a matrimonial dispute, children are handed over solely to the estranged wives, with no access to non-custodial parents, the fathers.

Panda then went on to add,

The worst pain a father goes through is when his own kid – for whom he lives and is willing to do anything – rejects him. This is a result of brainwashing done by custodial parent (mother) against the father, commonly referred to as Parental Alienation Syndrome (PAS).

Our children are used as pawns to harass us!

37-year-old Zakir Hussain, again from Cuttack, who has been alienated from his child, emphasised,

I am not a Guest or ATM.. EITHER I AM A FATHER OR NOT…

Here are some of the images and videos from #HopeWalkToPuri

#HopeWalkToPuri
Dear child,
Never think that I'm not with you.Due to #ParentalAlienation you are not with me, but I haven't loosen my hope. I'll fight to the eternity, you are soul of my life without I can't live. Sooner or later we will meet.

Can you please give a like and retweet to this noble effort by alienated fathers who are fighting for the rights of their children by doing a prayer walk from Bhubaneswar to Puri and praying to Lord Jagannath #HopeWalkToPuri pic.twitter.com/kiacvUcvHM

Seems 2022 is a good year.Balance is getting restored

After #JohnnyDeppIsInnocent win, a movie in Kannada on misuse of #GenderBiasedLaws – #WeddingGift #WeddingGiftMovie we have now many fathers taking a huge sacrifice of walking 65 KMs frm Bhubhaneshwar 2 Puri – #HopeWalkToPuri pic.twitter.com/DSW22uoEiJ

Criminals & Terrorists have more rights in India then a Father. Men have lost hope in Indian constitution & legal system now praying to Prabhu Jagannath for help. #HopeWalkToPuri for prayer to Lord, "You returned to you abode on Bahuda, when will our kids return."@realsiff pic.twitter.com/WYF4hHpdgu

Lucky to meet the Super Dad who completed the #PrayerRun @ashrafnansari

Odisha is a warm state and very difficult to walk a few KM in the sun, still some fathers determined for #HopeWalkToPuri for their love towards children & prayers to Kaalia.
A hope to stop Parental Alienation #HopeWalkToPuri pic.twitter.com/1j9xLJ9G63

"Why is Father treated like Prisoner, who is given visitation of just 5-10 min with his own children?"#VoiceForMenhttps://t.co/Jes7OEx9Il 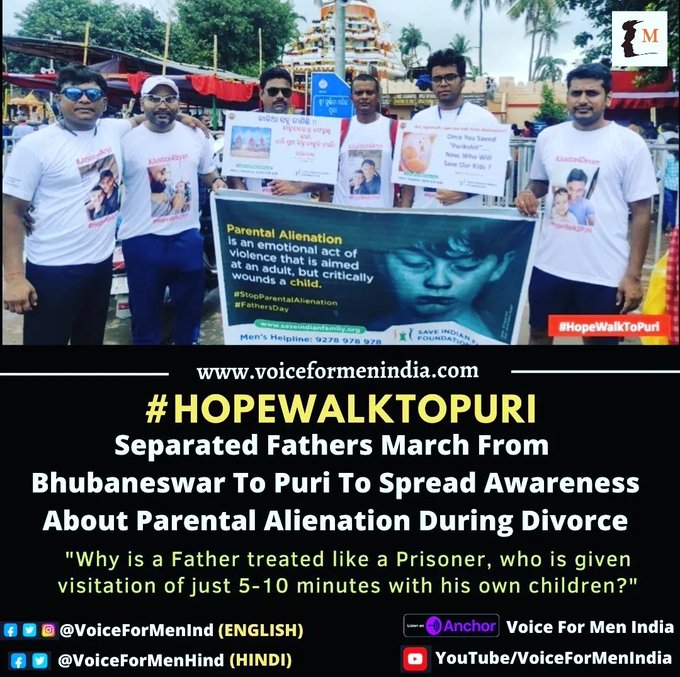