The Madras High Court in its order dated September 16, 2022 reversed the interim custody of minor children given to father, and handed them over to the mother, since the custodial parent allegedly did not allow access between the kids and non-custodial parent.

Voice For Men India truly believes that interest of the children must be supreme, and either parent who tries to brainwash the children against the non-custodial parent must be dealt with strictly. This order can also be used by several separated non-custodial fathers who are not being allowed to meet with their children by their custodial mothers.

Parties got married in 2009 and have two sons – aged nine and six years old. Due to differences, the couple started living separately since April 2021.

According to an earlier High Court order, the interim custody of both children was given to the father, while the mother had been granted visitation rights.

However, the wife approached court and informed them that the husband was not adhering to the order, and was also alienating the minds of the children by speaking ill about their mother.

The bench was thus hearing an application filed by the wife – who is a lawyer herself – seeking the interim custody of both her sons.

As per order dated 26.05.2021, the High Court granted visitation rights to the applicant mother to visit the minor children who are living with the respondent father on every Saturday and Sunday between 10.00 a.m. and 6.00 p.m.

While passing this order, the Court had observed that the parties shall extend the utmost cooperation for the smooth working of the present arrangement and not to create any impediments or hurdles prejudicial to the interest of the parties and further, they shall not create any situation that may affect the tender minds of the children as the arrangement is worked out and put in place only towards securing the larger well being of the children.

The learned counsel for the wife/mother submitted that the respondent, by denying the total access of the applicant to her children was only tormenting the tender children to their detriment and in violation of the orders passed by this Court.

The mother also submitted that the respondent father has changed the school of the children for four times with clear motive of moving them far away from the applicant and also shifted the residence to Moduravoiyal with the children.

On the other hand, the learned counsel appearing for the respondent husband/father submits that the applicant, being mother of the children, never bothered about her children since from the date of their birth and the happiness of the children became horrible trite at the instance of the termagant mother/applicant.

The learned counsel would submit that even the parents of the applicant repugnantly estranged their daughter, the applicant herein because of her trait of dominating superiority, bombarding language towards all her inhabitants. The husband/father added that he is always most cautious whenever issues come with the applicant for the children not to be branded as children of divorcee, but the applicant always threatens the respondent that she needs divorce and files case without having a feeling of mother who have two children and their life.

Single-judge Justice Krishnan Ramasamy of the Madras High Court, considered all the facts and circumstances on record, especially the applicant/mother is not having the custody of the children.

The court noted that in order to ensure the well-being and robust growth of the children be unaffected by the estranged and strained relationship of the parents, the young children require the attention of the applicant/mother. Various orders were granted for visitation rights to the applicant/mother, directing to the respondent/father to hand over the custody of the children on specific days by dropping them at the residence of the applicant/wife, who is residing across the road in the same locality where the respondent/father and children are also living.

…The respondent has even indulged in parental alienation and tutored the children to act and behave contrary to the wishes of the applicant/mother and according to the applicant, the respondent has updated the children everything about the Court proceedings and disputes between them, which prompted the elder son to act against the mother and used to resist to stay with her and on one occasion, he restrained himself to go with his mother and demanded the mother to withdraw the case filed against his father.

Without parental alienation, this could not be possible for a tender aged child to insist and demand his mother to withdraw the case and impose condition that unless she withdraws the case, he would not come to his mother.

The High Court also went on to remind the father of his duties as a custodial parent. The Court said,

If the respondent is incapable to teach or persuade the children to love their own mother, then there involves a serious parental alienation which is not good for the welfare of the children.

Welfare of the child is paramount consideration, but being with the parent who is not ready to teach and persuade his children to love their own mother, cannot be accepted.

It is pertinent to note that the applicant and respondent are just separated from being husband and wife, but they will always be the father and mother for their children. The said relationship of father and mother will not be changed despite the parents re-marry with any other.

Looking at the conduct of estranged husband, the High Court directed that the interim custody of both children be handed over to the mother till the original petition will be decided finally.

Law can satisfy the ego, but it can never the satisfy the requirements of the child, as the framers of the law were only conscious of the welfare of the child and not on the mental turmoil that would be faced by a child in such a calamitous situation.

HC: "If father is incapable to teach kids to love their own mother, this is serious parental alienation"#SharedParentinghttps://t.co/BDlK1H4nqD 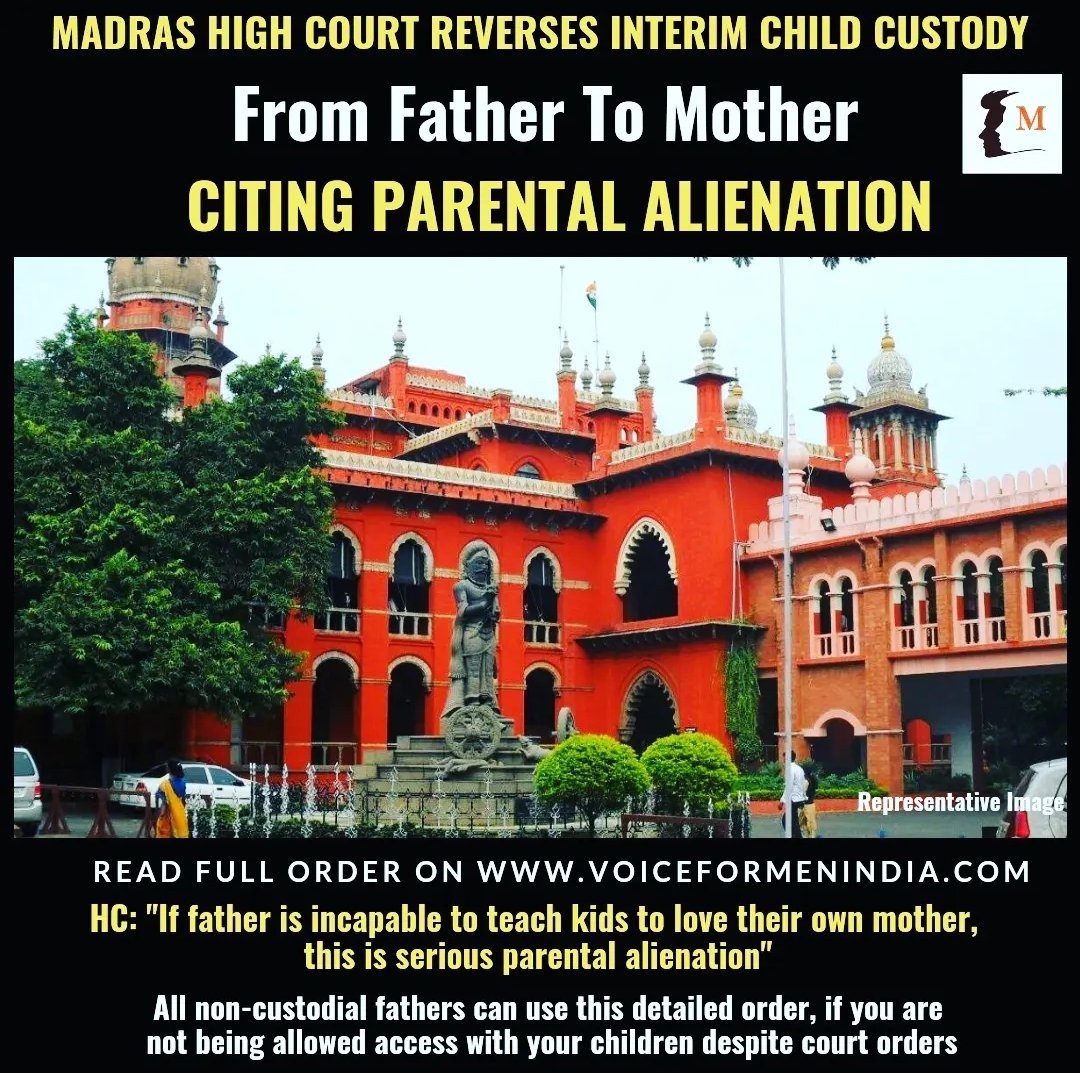 MUST WATCH: OTHER SIDE

Father complains of no access to son, despite multiple court orders

(Wife has left India and the child is handed over to her parents, instead of biological father)