by Team VFMI
in CRIME HAS NO GENDER, IN THE NEWS
0

Crime Has No Gender. Its about time society stops painting all women as victims.

In a recent case reported from Mumbai by Hindustan Times, a 72-year-old was arrested for practicing as a lawyer in family court for decades without a proper license.

Mordekai Rebecca Joub alias Mandakini Kashinath Sohini, a resident of Pali Hill in Bandra, was arrested on Saturday for allegedly practicing in various courts based on a fake lawyer’s license.

While the police have said the licence is fake, it has now been forwarded to the Maharashtra and Goa Bar Council for further verification. The woman has been remanded in BKC police custody.

As per the report, the police stated that the woman had been practicing law by submitting a fake Vakalatnama (a document, by which the party filing the case authorises the Advocate to represent on their behalf) to each court before representing a client.

In July this year, the police had issued her a summons, after a lawyer from Borivali court identified as Akbarali Mohammed Khan challenged her credentials. However, Sohini did not turn up then.

On Saturday, Sohini went to the police station and submitted her licence along with her Aadhaar Card and Vakalatnama. On investigation, the officers learnt that her licence to practice law turned out to be fake. Police then contacted the Bar Council of Maharashtra and Goa to verify the woman’s licence.

Speaking with HT, the officers said that as per the FIR, Sohini claimed that she has got a valid licence to practice and submitted the ‘Sanad’ or ‘licence’ number (MAH/253/1979). However, one of the officers from BKC police station said,

Her licence number showed that she had been practicing with the licence that was issued to one lawyer Kanbeshwar Pandrinath Yashwant from Solapur.

Later, she claimed that her genuine licence is (MAH/253/1979). When verified, this too turned out to be issued in the name of lawyer Suresh Rambhau Gurde from Amarvati.

44-year-old Khan from Borivali had alleged that Sohini was not a lawyer and had been practising since decades in the family and other courts of Mumbai illegally. Khan was tipped off about Sohini practicing without a valid licence by a source in the family court after which he filed a written application with the BKC police. Sohini was produced before the Bandra holiday court on Sunday.

Advocate Sashi Nair, president of the bar council of family court, said that this practice is rampant in the family court. Nair also added,

There is an investigation going on at the family court about this and all the judges have made it clear that whoever appears for their client should attach their sanad (licence) along with the vakalatnama and submit it to the judge before representation. 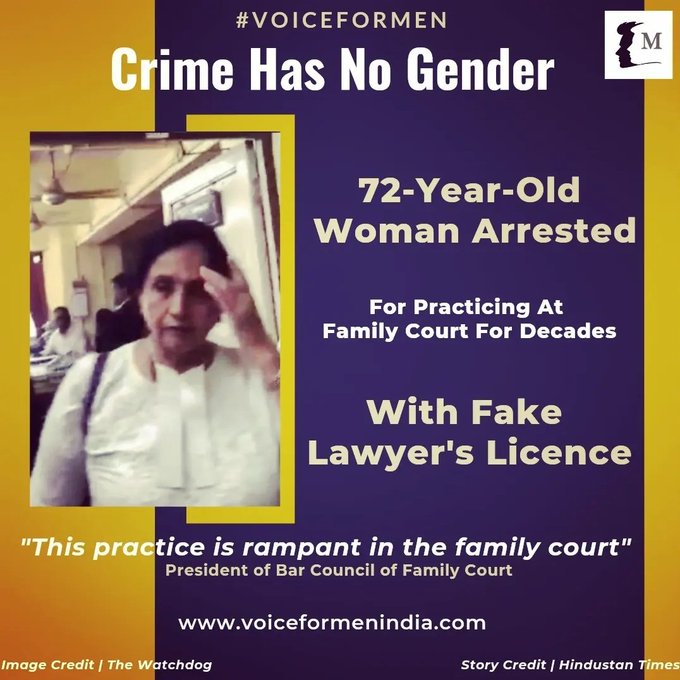 Tags: #CrimeHasNoGendercrimes by womenIn the Newsmumbai