Maintenance cases after husband is dead can be tricky. This is why all women either need to be self dependent during the existence of marriage, especially when there are no kids involved.

The Aurangabad bench of the Bombay high court in it’s July 2022 order ruled that a widowed daughter-in-law does not have a right to claim compensation from any in-laws or relatives of the husband.

This was man’s second marriage, and the legality of the same was also contested by his family.

The man who worked as a talathi (government officer) in the State Revenue Department of Maharashtra had his first marriage in 2008 and the couple’s divorce petition was pending before a family court for many years.

The man then remarried in 2016, without an official divorce from the Court. However, post remarriage, his divorce came through in September 2017.

After his demise, the second wife approached court to direct her in-laws to pay maintenance for her subsistence.

Lawyer Mayuri Kasturkar, who appeared for the “widowed daughter-in-law”, submitted that the in-laws had allegedly forced the woman out of their house after the husband’s death. The wife also contested that the mother-in-law had sold a piece of land to the husband of her daughter in November 2016. The woman was unable to maintain herself as her husband’s property was in the hands of her in-laws.

Lawyer Sandeep Rajebhosale, who represented the in-laws, argued that as such, the second woman’s marriage during the subsistence of the husband’s first marriage, was not legally tenable.

On November 10, 2021, the magisterial court at Sillod in Aurangabad district directed notices against the mother-in-law, married sister-in-law and her husband in response to an application by their “widowed daughter-in-law” seeking maintenance from them.

Justice Vibha Kankanwadi of the Bombay High Court Aurangabad Bench quashed and set aside the entire proceeding before the lower court against the three in-laws. The judge relied on two citations from the Punjab and Haryana high court and the Andhra Pradesh high court in support of her observation.

Citing limitations for maintenance under Section 125 CrPC, the Judge observed,

There is no such provision, much less the interpretation of Section 125 of CrPC (Code of Criminal Procedure) by any stretch of imagination, would not give a right to a widowed daughter-in-law to seek maintenance from father-in-law, mother-in-law or any of the relatives of the husband.

Adding further, the bench pointed out,

Maintenance under Section 125 of the code of criminal procedure can be sought by a person against another who has refused to maintain his wife or his illegitimate minor child, his father or mother.

Transfer of Property from Husband to In-Laws

The High Court also observed that the property transaction by mother-in-law to her son-in-law was done at the time when the husband was alive, and he (son) never objected to the transaction. 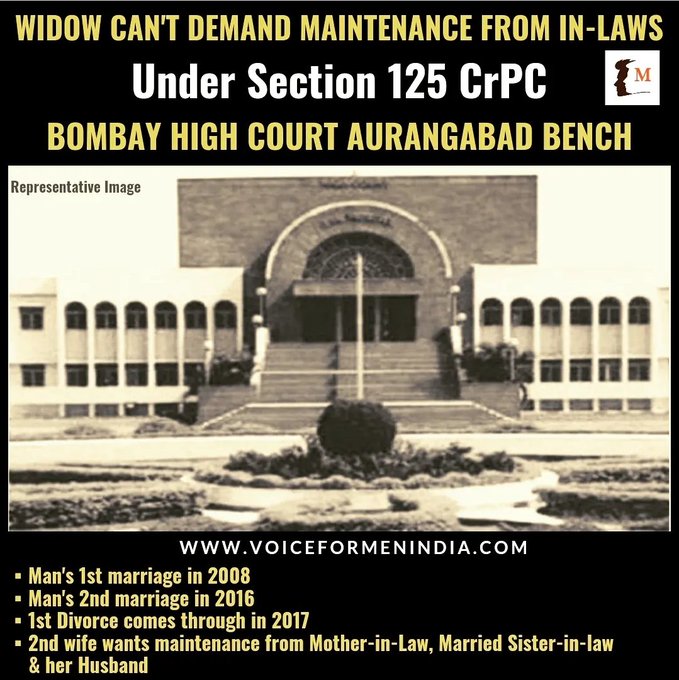