It Is A Fashion To Rope In All Poor Relatives Of Husband Under Section 498-A IPC Even If They Never Lived Together: Bombay High Court Aurangabad Bench (Representation Image)

How does it feel when courts repeatedly acknowledge false cases, but fail to take any action whatsoever against disgruntled wives who dare to file false cases? Once again, the Aurangabad Bench of the Bombay High Court openly called out the trend of roping in all ‘innocent’ relatives of a husband in cases registered under Section 498-A of the IPC.

Once these cases are filed, family members of the husband have to run for anticipatory bail to avoid arrest, or plead to quash false criminal charges.

The complainant-wife had filed a case under Section 498-A (dowry harassment and cruelty) against her husband and in-laws. In her complaint, she had accused all of torturing her and subjecting her to domestic violence.

Jyoti Patil, sister-in-law who had been accused in the case, approached court, arguing that her brother and his wife were residing at Pune, while she was residing at Bhusawal in Jalgaon, where she was working as a veterinarian.

The Court was hearing this plea filed by Patil seeking to quash and set aside the criminal proceedings initiated against her by her sister-in-law.

Bombay High Court: “Every Case Of Harassment To Married Woman Is Not ‘Cruelty’ Under Section 498A”

Hearing the matter Jyoti Ganesh Patil vs State of Maharashtra in detail, the Aurangabad bench of the Bombay High Court expressed its grave concern over the trend of roping in the relatives of a husband in cases of cruelty and domestic violence under Section 498A of the Indian Penal Code.

Justice Vibha Kankanwadi noted that the husband’s sister was living far away from the complainant-wife, and yet was named as an accused just because she happened to be the accused husband’s relative. Quashing the case on July 4, the High Court stated,

Time and again, this Court as well as the Supreme Court has observed that it is a fashion to array all the relatives of the husband as respondents or to make them as an accused in a complaint under Section 498-A of the Indian Penal Code and it shows the misuse of the proceedings of law, still the instances have not reduced.

Such poor relatives, who were never staying with the husband, cannot be asked to face the proceedings on some stray statements about the domestic violence. Therefore, the application deserves to be allowed.

When these basic pleadings are lacking and the documents on record are supporting the address given by the aggrieved person of a different place, then, a case is made out to invoke the inherent powers of this Court to quash the entire proceedings against the applicant.

Justice Kankanwadi further said that since the accused sister-in-law was residing at a different place and it was unlikely that she would have indulged in any acts of domestic violence against the aggrieved person, she cannot be framed as an accused. Quashing the matter, the High Court held,

Therefore, the applicant cannot be asked to face the proceedings.

"It Is A Fashion To Rope In All Poor Relatives Of Husband Under Section #498A IPC, Even If They Never Lived Together": Bombay High Court Aurangabad Bench 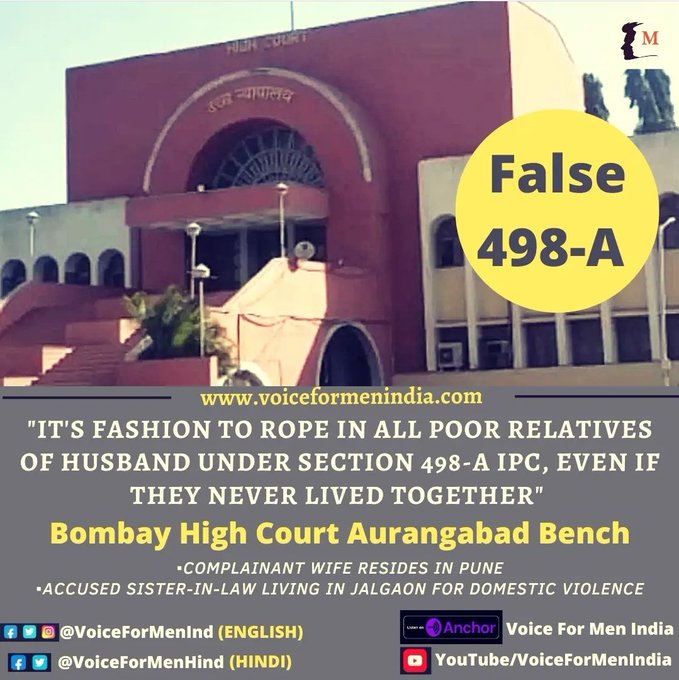