by Arnaz Hathiram
in HIS STORY, IN THE NEWS, SPEAK UP MEN, SUICIDE
0

After the very unfortunate Nirbhaya gang rape and murder case in 2012, laws around rape and sexual harassment have been made extremely women friendly and rightly so. However, over the years, there has been a flip side to these laws, where several Men have lost their lives due to alleged false sexual harassment or false rape accusations.

We report one more such ill-fated incident, this time from Gurugram, where a 41-year-old executive ended his life earlier this month.

Amit Kumar had worked in the telecom industry for over 10-years and had recently joined Optum Global Solutions Company in Gurugram. Within a couple of months of his joining, on August 29, Amit was grilled in an alleged ‘sexual harassment case’ after a female co-employee complaint about the same.

On August 30, Amit ended his life leaving a detailed suicide note which said he was innocent. He also said sorry to his wife and 5-year-old son, who he leaves behind.

Deepika Narayan Bhardwaj, independent journalist, met with Amit’s family in Gurugram, who had certain things to share from their side.

Amit’s wife Pooja looks visibly shattered after the sudden demise of her husband. Pooja expressed how things unfolded on that day. She says,

I received a call from one of my husband’s colleagues that Amit was about to end his life. When I rushed into his room on that day, he had hung himself with my duppatta. I was screaming and crying…calling out for help…

My neighbours came over, brought his body down and we rushed to Medanta hospital.

Pooja also shared how there was no communication from Amit’s organisation after they tried contacting them post his demise.

Pooja further speaks about a 5-page suicide note that her husband had penned before ending his life. Incidentally, there was some dispute between Amit and one of his junior female colleagues over delaying the office cab, and the sexual harassment case was possibly to fix Amit in this issue. She exclaims,

We only want to understand what exactly happened on August 29. What was told to him in that office meeting that Amit chose to just end his life.

My husband was planning for our 5-year-old son’s birthday just a day before. Someone who was planning his child’s birthday, how can he die by suicide.

Pooja also accuses her husband’s organisation of humiliating him without basic investigation. She stated,

Whoever levelled those charges, it was the responsibility of the company to do basic investigation…Due to one wrong step by my husband (suicide) my child’s and my life has been ruined forever.

Amit’s elder brother Praveen Kumar also shared, how all his (Amit’s) ex-colleagues were ready to give a character certificate with whom he had worked for the past several years. Praveen said,

From whatever we understand, Amit had called the female employee (who was reporting to him) during the time of taking office cab. We don’t understand how this falls under sexual harassment case… Amit was accused of asking the girl about her father’s retirement. How is this even remotely connected with sexual harassment.

My brother has written in his suicide note that due to the meeting on August 29 about this false sexual harassment allegation, he was leaving this world…

Amit’s elder sister Meenakshi who lives in London, and who is in NCR currently, also expressed her angst against the lopsided laws in India. She said,

We also have such cases in the UK, but both sides are given a fair chance to put up their explanations before proceeding with the allegation.

India must review these laws. Sexual harassment is a very broad term. We must fight for women, but women too should not take advantage of these laws. We should not lose more Amits.

I contacted the family after seeing reports about the suicide in local newspapers. It’s terrible what the family is going through. Optum’s response to the situation is disturbing being such a big corporate.

If this was case of suicide of a female employee, NCW would have pitched in and ordered enquiry. But since it’s a man who has died, there’s no one to speak for them. I am trying to help them as much as I can.

What is POSH (Prevention Of Sexual Harassment)

The Sexual Harassment of Women at Workplace (Prevention, Prohibition and Redressal) Act was passed in 2013. It defined sexual harassment, laid down the procedures for a complaint and inquiry, and the action to be taken. It broadened the Vishaka Guidelines, which were already in place since 1997.

It mandated that every employer must constitute an Internal Complaints Committee (ICC) at each office or branch with 10 or more employees. It laid down procedures and defined various aspects of sexual harassment, including the aggrieved victim, who could be a woman “of any age whether employed or not”, who “alleges to have been subjected to any act of sexual harassment”.

This meant that the rights of all women working or visiting any workplace, in any capacity, were protected under the Act.

Under the 2013 law, sexual harassment includes “any one or more” of the following “unwelcome acts or behaviour” committed directly or by implication:

The identity of the woman, respondent, witness, any information on the inquiry, recommendation and action taken, the Act states, should not be made public.

Leave your thoughts below on this case:

▪️Wife: "My husband was planning our 5Y/O son's birthday just a day before. What exactly happened in office that he chose to end life?" 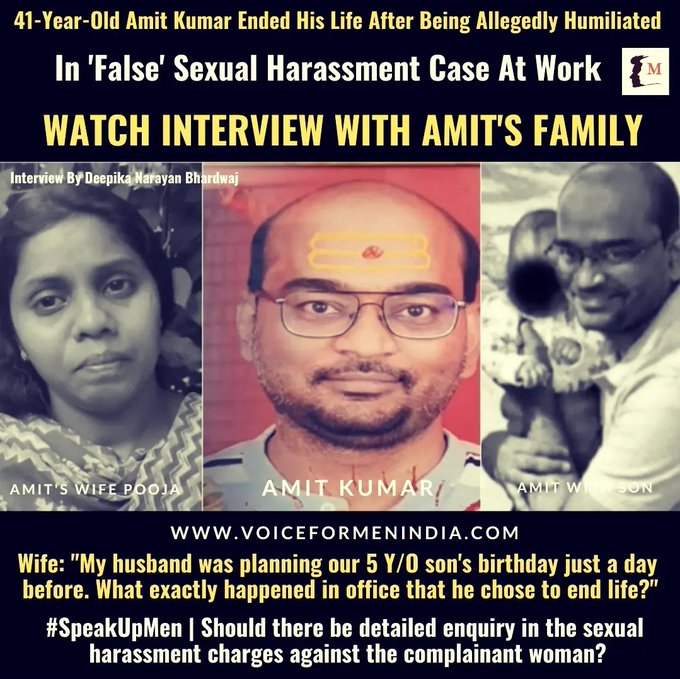