Today happens to be World Suicide Prevention Day. Sadly, earlier this month, yet another man ended his life, this time in Gurugram, after he was accused of sexual harassment charges at an office meeting.

The 41-year-old victim was working as a senior executive at a private company in Section 9 of Gurugram. He had joined the company – which facilitates healthcare services digitally – a month and a half ago after working in the telecom industry for over a decade.

On the morning of September 02, he ended his life leaving a note for his wife and 5-year-old son. The note read,

I am sorry for my wife and son for leaving them alone. Today I was humiliated with sexual harassment allegations in the meeting.

According to media reports, in the previous week of the man’s suicide, a female colleague had accused him of sexually harassing her. The note further added,

I never gave special treatment to any employee. I treated every employee equally. Whatever I am doing is due to allegations in the office. My family and relatives are not involved in this.

The executive’s wife said that she received a call on Tuesday morning from one of her husband’s colleagues, who told her that he had sent a message saying he was about to kill himself. She ran upstairs and found his body hanging from the fan.

The executive’s wife then accused his company and colleagues of driving him to suicide.

Speaking with TOI, victim’s cousin Mohit said that the family was not aware that he was undergoing any stress at work. He quoted,

We were unaware. His colleagues from the current company said something was going on at the office regarding the issue for the last 7-8 days, but he never said anything at home.

The victim had met his brother, who lived next door, just last weekend. Mohit added,

Because of night shifts, he was not available to meet during the day. Last Saturday (Aug 29), I met my brother, and nothing seemed amiss.

One Year To #MeTooIndia Movement | A Balanced Debate On Channel NewsX

No Statement From Company

The company he worked for did not respond to requests for comment from the media.

Police said they have started a probe after the executive’s wife filed a complaint and have called in handwriting experts to study the four-page note apparently written by him.

An FIR naming the company and the colleagues has been registered at the Sector 9A police station. The accused have been booked under Section 306 (abetment of suicide) of the IPC.

The victim’s family and well-wishers conducted a “Shanti March” on Monday this week.

The rally saw the participation of dozens of people, including police officers and the executive’s colleagues from his former workplace, all chanting slogans of justice. Mohit told media,

The Shanti march was organised against the company in the name of my cousin. No one from his company came to visit us.

They are speaking what their legal advisor has asked them to and are trying to suppress the case. They have not even initiated an inquiry within the organisation.

Note for Victim’s Family / Cousin Mohit: If you are reading this article, please reach out to Voice For Men India at [email protected] 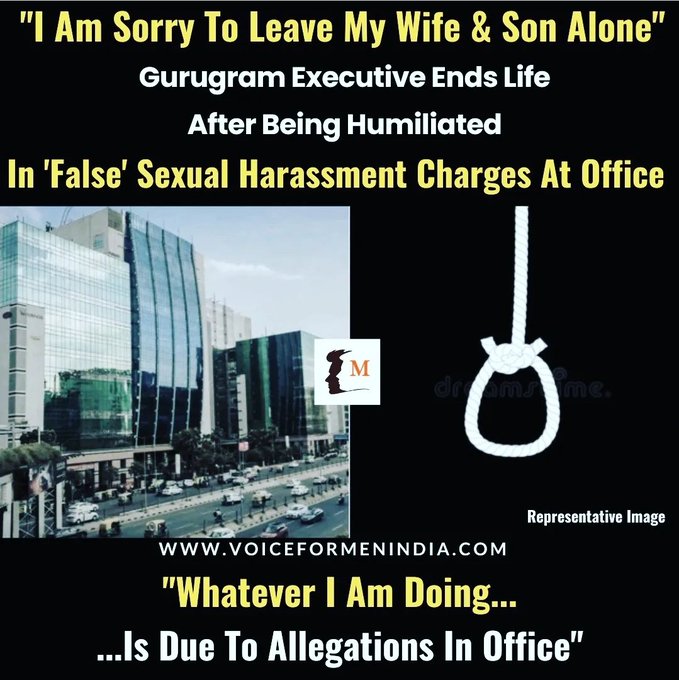