by Team VFMI
in HIS STORY, IN THE NEWS, SPEAK UP MEN, SUICIDE
1

#MeToo was a pathbreaking movement where several women named and shamed their perpetrators who physically assaulted them at some point in time. However, when society stands up for one gender, why do they forget to strike a balance to curb possible misuse which could eliminate an innocent life forever. Below is one such case of Swaroop Raj from NCR, where after his death, the details of the complaint are not known.

Swaroop, 35, worked as an IT executive at Genpact in Noida for over ten years. In December last year, the assistant vice-president had been barred by the company from taking any official work pending an inquiry of an internal complaints committee (ICC), into the allegations of sexual harassment against him by two female employees. He was suspended temporarily over allegations.

Unfortunately, even before the enquiry was complete, Raj committed suicide at his home in Noida. His body was discovered hanging from the ceiling fan by his wife at their residence in a high-rise building in Sector 137. He left leaving a note for all, pleading not guilty. Senior Superintendent of Police (SSP) Gautam Buddh Nagar said when the police were informed, they reached the house and sent the body for post-mortem. In the note, Swaroop Raj refuted the allegations calling them “baseless” and said he did not “have the courage to face anyone” because people would “look at me with that eye even if I come clean”. Addressing the note to his wife, Swaroop wrote:

I want to let you know how much I love you. I have been accused by two employees of sexual harassment and trust me I didn’t do anything. I know the world will understand it, but you and our families should trust me. The allegations are baseless and the entire Genpact will know about it.

Hence, I don’t have the courage to face everyone. I want you to be strong and live your life with whole respect, as your husband has not done anything. I am going as everyone will look at me with that eye even if I come clean (sic), it read.

He had joined the company in 2007 and was promoted to the senior post recently. He had got married just a couple of years ago.

The police registered a case against some of the company’s employees, including two women who had complained against him, for suicide abetment. A first information report or FIR was registered at the Surajpur police station under the relevant section of the Indian Penal Code on a complaint by the wife of Swaroop Raj, who has accused some of the Genpact officials of abetting the suicide, a senior police officer said. 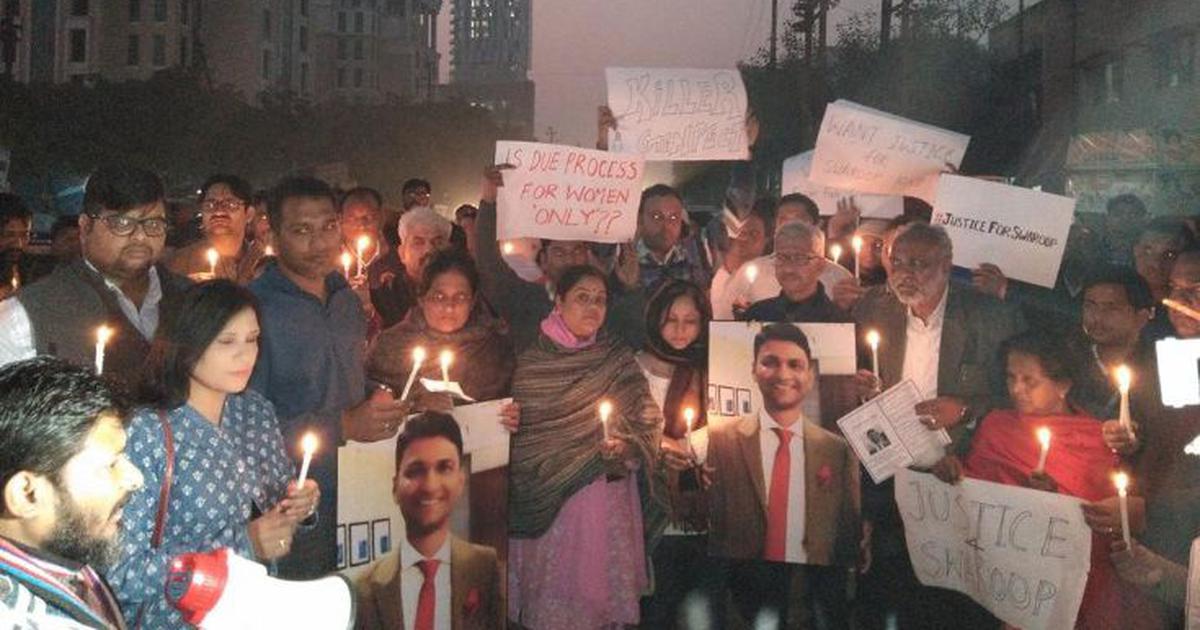 Meanwhile, Genpact condoled the executive’s death, but maintained that it would prefer to protect the privacy of its employees and not divulge the details of the complaints which have “serious allegations” and were being investigated by its Internal Complaints Committee (ICC).

A company spokesperson informed the media,

To have a fair, uninfluenced inquiry, he was placed under temporary suspension pending the closure of the inquiry in line with legal requirement and company policy so that (the) ICC could carry out a reasonable investigation into the allegations received from two female employees.

While certain sections of the media have questioned the police for charging the complainants with abetment to suicide, many other social media users have challenged the dignity of a man, if the allegations are proven to be false. While on one hand Me Too campaign encouraged many women to speak up against the trauma of physical assaults, the probable misuse of naming and shaming men has not been addressed or accounted for, thus far.

It is easy to ask men to stay strong and give it a fight. But the mental harassment and embarrassment one goes through while being innocent cannot be explained in words. Despite this, men and their families do need to be prepared for such instances and approach the same legally if you are on the right side of the law. Do not think of what society thinks of you if you are right.

Hang on and you will emerge much stronger and with greater respect.