Provisions of the POCSO Act are to safeguard our children and give them justice at the earliest. However, it is beyond imagination when even children are allegedly used as pawns to either settle personal score or take revenge or misuse one’s power.

In one such incident, the Allahabad High Court in its order dated September 02, 2022 granted bail to an accused man who was booked for committing an Aggravated Sexual Assault (punishable under Section 10 of the POCSO Act) upon a 8-year-old girl.

The bail was granted after the parents refused to get their daughter medically examined.

The parents of an 8-year-old girl alleged that in their absence, one Manoj Saxena, a dish repairing technician, who had visited their house, sexually assaulted their daughter after he found her to be alone.

The parents accused the technician of committing vulgar activities with their daughter. As per the FIR lodged by the parents, Manoj ran away from their home, when their daughter made hue and cry while she was being allegedly molested.

In her statement recorded under Section 161 Cr.PC, the minor stated that when the accused came in her house, to repair the dish connection, he inserted his hand in her clothes and kissed her on the lips.

As per her statement recorded under Section 164 Cr.P.C., the young girl also alleged that the accused held her tightly and kissed her lips, inserted his hand into her panty, and also pressed her breast by inserting his hands therein.

On behalf of the accused, it was argued that the allegations made in the FIR were generic in nature, and as per the statements of the victim recorded under Sections 161 and 164 Cr.P.C., no ingredient of Section 376 IPC (rape) is made out.

The accused was booked under:

The accused man was has been in jail since April 2022 moved the High Court seeking regular bail.

The bench of Justice Sadhna Rani (Thakur) went through evidences and statement on record.

The accused was granted bail taking into account the larger mandate of Article 21 of the Constitution of India and the Apex Court’s dictum in the case of Dataram Singh v. State of U.P. and another (2018) 2 SCC 22

The Court further noted that the parents of the victim denied any medical examination of the victim and thus bail was granted to the accused. The High Court concluded,

Having heard the submissions of learned counsel of both sides, considering the seriousness of the charge and the severity of punishment in case of conviction and the nature of supporting evidence, prima facie satisfaction of the Court in support of the charge, reformative theory of punishment, and larger mandate of the Article 21 of the Constitution of India, the dictum of Apex Court in the case of Dataram Singh v. State of U.P. and another, reported in (2018) 2 SCC 22 and without expressing any opinion on the merit of the case, I find it to be a case of bail.

Let the applicant, Manoj Saxena, who is involved in aforesaid crime be released on bail on his furnishing a personal bond and two sureties each in the like amount to the satisfaction of the court concerned subject to conditions.

▪️Allegations by Accused Man: "Father of girl is a policeman & this FIR is only a misuse of that power"https://t.co/0xOguHBcv9 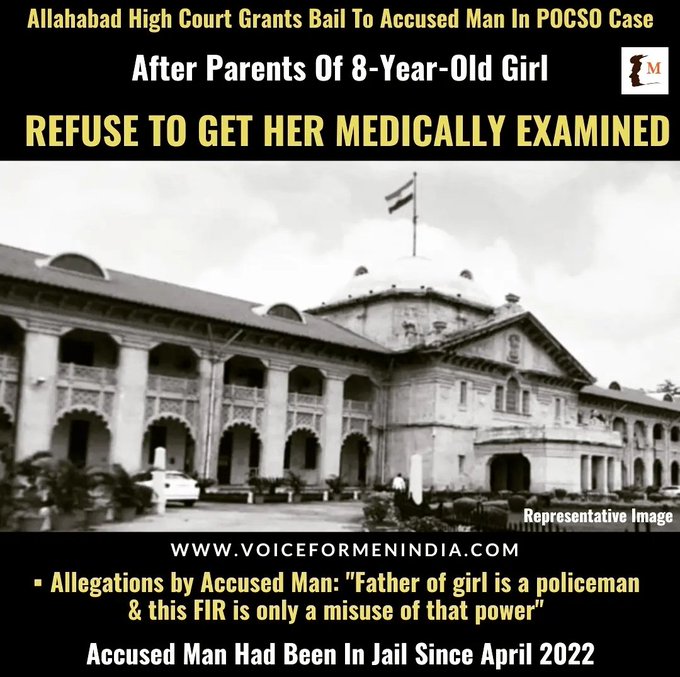