Few days ago, a lawyer in Jalna district of Maharashtra was found dead at his house. Initial probe suggested that the man had died due to LPG cylinder explosion inside his home, however, now the story has taken a new turn.

The police, last week, arrested his 21-year-old wife and her accomplice friend for allegedly murdering the recently married man.

Kiran Lokhande got married to Manisha Lokhande from Buldhana around 3-months ago. Kiran was a lawyer by profession.

According to police, Manisha was in touch with her ‘friend’ Ganesh Mittu Aglawe (23) a resident of Badnapur tehsil in the district, even after she got married. The duo allegedly hatched a plan to eliminate Kiran Lokhande.

On August 30, Manisha with the help of Ganesh allegedly hit her husband with a rod and strangled him to death. The burnt body of the lawyer was found at his residence on Ambad Road on September 1.

According to police, after Lokhande’s body was found, Manisha had faked a story and told the investigators that a fire had broken out in the kitchen due to the leakage of gas and when her husband was trying to switch off the LPG cylinder, he died due to the blaze.

The police had then registered a case of accidental death.

The matter was taken up by a delegation of Jalna Vakil Sangh, a lawyers’ organisation, who met Additional Superintendent of Police Vikrant Deshmukh and demanded a thorough probe into their colleague’s sudden death.

The police subsequently launched an investigation and found a motorcycle of the deceased outside the town.

After scanning the CCTV footage and checking the call records of the accused, the police found that Manisha continued to be in touch with her friend Ganesh. Thus, the preliminary probe revealed that it was not an accident.

Speaking with the media, Investigation officer S N Wadate said that Manisha and Ganesh had allegedly executed the plan to eliminate Lokhande.

After committing the crime, the accused even went to Pune, where they spent one day and later returned to Jalna and cooked up the false story. The police presented the accused before the local court, which remanded them in seven-day police custody.

On a daily basis, regional media reports about Husband Murder from various parts of the country, most common motive being wife’s extra marital affair or grabbing insurance money. Unfortunately, NCRB does not have a specific category to register Crimes Against Men – By Women and thus our country only outrages on how Crimes Against Women are always on the rise. Crime Has No Gender…Victim Has No Gender. 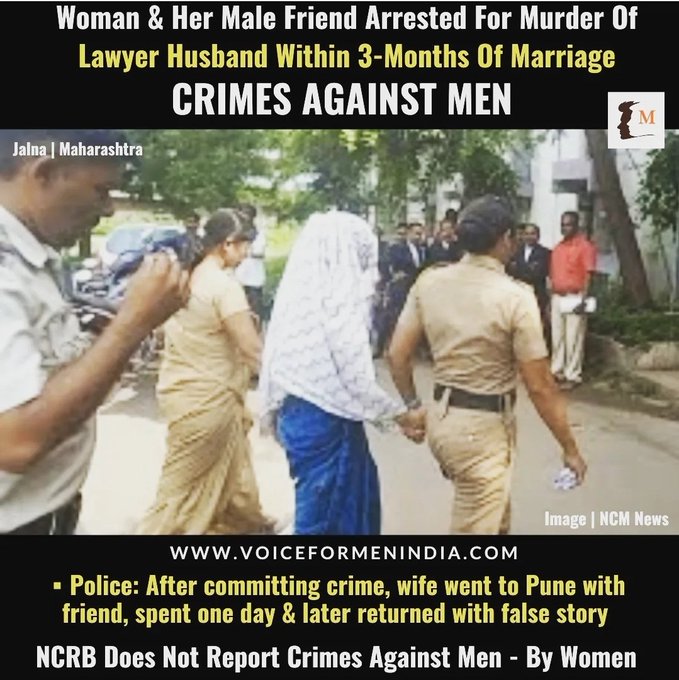