In September 2021, 45-year-old Sonia Gupta proudly threw a divorce party for herself to celebrate being “finally” free after 17-years of marriage. Gupta, an Indian, had a colourful themed party with her family and friends to celebrate the end of her divorce process that spanned around three years in the UK.

While the recently Divorced Wife posed in a colourful dress along with a “finally divorced” sash at her ‘It’s a Sonia Thing’ party, her guests too were asked to wear the loudest and most vibrant outfits. Speaking to Mirror UK back then, Sonia who works as an accounts manager, said,

I chose the theme to be colourful, bright and full of unicorns, as I’m a very bright colourful person. To me, the theme was magic, because after the last 10 years, I think I deserve that little bit of magic.

Sonia had an arranged marriage in India in 2003 and moved to the UK. After Sonia’s story went viral, feminist portals could not stop hailing the woman’s party – calling it freedom and liberation from a dead bond!

Bhai Welfare Society (registered in 2014), a Men’s Rights NGO based out of Bhopal in Madhya Pradesh had planned to organise a ceremony for 18 recently Divorced Husbands, who were freed from their respective legal battles, after paying hefty alimony to end their bad marriage.

The event had been named as ‘Vivah Vichchhedan Samaroh’ (Marriage Dissolution Function) and was scheduled to be held on September 18, 2022 at a resort located on the outskirts of the city. An online invitation was also floated by the NGO, which read as below:

The invite for the event read: Bhai Welfare Society was holding the first such programme in the country after winning against false cases of dowry harassment, CrPC 125 and Protection of Women from Domestic Violence Act, 2005.

The NGO claimed that several engineers, doctors and other working professionals, who had been victims of such false cases, are members of the self help group.

In a turn of events, NGO’s convener Zaki Ahmed informed PTI that the event had been cancelled due to protests by some organisations. Speaking with the media, Ahmed said,

The society has decided not to hold this event after the booking of the venue was cancelled by the owner over protests by some organisations. We don’t want any controversy as our main work is to provide legal help and help people overcome crises.

He had earlier said it was a get-together, but the invitation of the event meant for a small group, went viral on social media. However, he added,

I am now receiving calls from people who are opposing it, claiming it is against Indian culture.

People in the group were already celebrating their divorce, after long-drawn battles and paying huge alimony to get out of bad marriages, he said.

NGO Does Not Encourage Divorce, Fights For Exit From Bad Marriages

Ahmed also shared that the NGO was not in support of encouraging random divorce in society. He said,

We don’t support divorce, but a bad marriage leads to harassment and sometimes suicide. We want to stop it. Our organisation gives free legal help.

Amit Deshpande of the Vaastav Foundation, another Men’s Rights NGO based out of Mumbai, expressed his displeasure on how only Men are targeted by the ‘traditionalists’. He wrote,

Eventually #BHAI Welfare Society has to withdraw its divorce celebration event The traditionalists have no qualms if women hold religious rituals for sologamy but oppose men even in celebration. Thats because they know only men can be shoved around, women cant be opposed in #India

Eventually #BHAI Welfare Society has to withdraw its divorce celebration event
The traditionalists have no qualms if women hold religious rituals for sologamy but oppose men even in celebration
Thats because they know only men can be shoved around, women cant be opposed in #India pic.twitter.com/4O7dwahE3y

Note: Men’s Rights Movement in India is not associated with any political or religious ideology. These NGOs are run by Men who have faced several false cases on them and their families. In the absence of any support or commission from the Government, it is an earnest endeavour on part of these NGOs to help Married Men in distress, most of the times who are on the verge of breakdown and suicide. It is a request to all activists on ground to refrain from giving Men’s Rights Movement any colour, as all are working in the interest of a better and happy society.

NGO: "We've called off the event as we don’t want any controversy. Our main work is to provide legal help & help people overcome crises"#VoiceForMenhttps://t.co/ZKTaTMLhyA 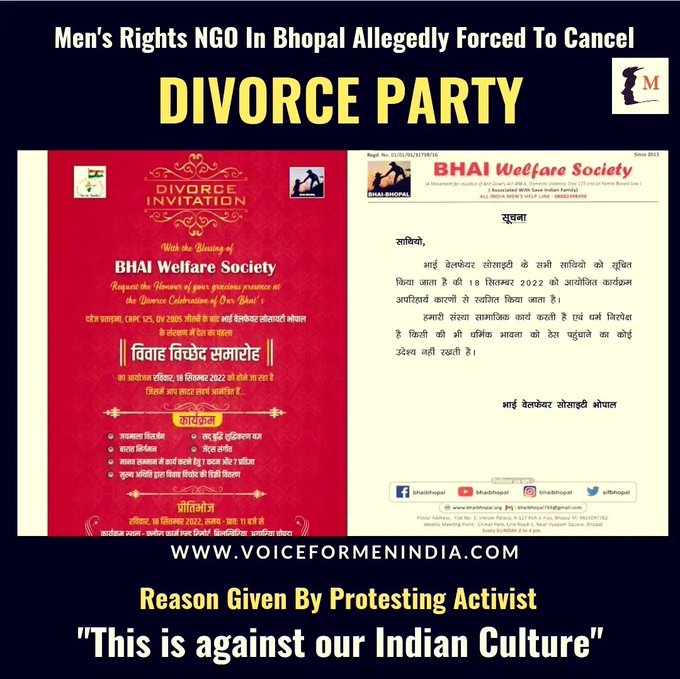