Even If Parties Have Separated Since 18-Years, We Cannot Grant Divorce To Husband As Marital Status Important For Indian Women | Supreme Court

Even If Parties Have Separated Since 18-Years, We Cannot Grant Divorce To Husband As Marital Status Important For Women In India | Supreme Court (Representation Image)

India has decriminalised Adultery in 2018 as a mark of progress for women and their bodily choices, however, a man has no exit from a marriage whatsoever after years and years of battling out in the Court.

In an extremely inhuman judgement that came from the Supreme Court in August 2022, the divorce decree granted in favour of a husband was set aside where the top court orally remarked,

Marital status is important for women in India given the social situation here.

What makes this case fit for a human rights intervention, is that the couple had been living separately since 18-years, despite which the Supreme Court chose to keep the dead relationship legally hanging for life.

A Division Bench of Justices UU Lalit and Ravindra Bhat was considering a petition filed by the appellant wife seeking to challenge a divorce decree granted by the High Court on the ground of desertion, as report by the Livelaw. Case Title: Sulekha vs Pradeep Pachouri SLP(C) No. 5726/2021 IV-C

Advocate Purushotam Sharma Tripathi appearing for the appellant wife, argued that there was no cruelty committed upon the husband, and neither the woman had left her in-laws place on her own will.

It was therefore argued, that the High Court could not have proceeded to pass decree for dissolution of marriage.

The wife also insisted in reuniting with her respondent husband.

Advocate Shishir Saxena, who represented the respondent husband refuted all charges and insisted on the divorce to end an already closed chapter in the life of the couple. The lawyer also stated that the husband had turned into a ‘sadhu’ (saint) and could not get back to his matrimonial duties.

Citing Irretrievable Breakdown in Marriage, the High Court had granted divorce to the husband stating,

The parties are living separately and therefore, it is necessary to draw a curtain on the same.

The bench emphasised that the couple had been living separately since 18-years and thus it was impossible for any scope of co-habitation between the parties at this stage.

However, the Bench also observed that the concept and status of marriage is quite important, considering the way society treats women. As reported by Livelaw, the Bench expressed,

There’s a lot of importance to marriage for women. And the way they are treated (in the society).

Noting that the husband had turned into a sadhu, Justice Bhat asked,

After a short discussion, the bench observed,

We will set aside the divorce decrees. To you (the husband) it will make no difference.

The husband was also informed that the amount of Rs 5 lakh, which had already been paid to the appellant wife as per the High Court’s direction, be left as it is. The Supreme Court questioned the husband,

That, 5 lakhs, whatever you have given to her, let her enjoy that. As some kind of ex gratia payment. She has not made any other demands. Is that okay?”

To this the husband replied in negative. The Bench added,

Find a solution, we can’t do that. Unless you come together and do something.

…the maintenance in any case, even after divorce, we are supposed to maintain, and the level of maintenance is not a very fancy sum. So therefore, on that aspect, it doesn’t call for any interference.

Wife’s lawyer further pressed for mediation between the couple stating,

High Court allowed the divorce under the irretrievable breakdown theory of marriage. We suggest mediation.

To this the top Court said,

No mediation. Enough of this.

3) No Divorce Even If Parties Will Never Co-habit Again

The husband’s lawyer once again pleaded,

He’s not ready to live with her.

To this, the Supreme Court reiterated,

No, we are not saying that. We cannot force parties. But let her have the status of being a married woman.

When the husband further said that he had no intentions of remarriage, the Bench added,

You may not remarry. But after your (marriage) status is restored, you cannot marry now.

According to Mr Tripathi, in view of clear finding by the High Court that the respondent Husband had not suffered any cruelty and that, the appellant wife had not left her in laws place on her own, the High Court could not have proceeded to pass decree for dissolution of marriage.

Seeing force in the submission, we, therefore, allow this appeal, set aside the order passed by the High Court and restore the judgement and decree passed by the Trial Court.

The Court further said that the amount Rs 5 lakhs which was already paid can be taken and adjusted towards the maintenance to be paid to the appellant wife.

"Even If Parties Separated Since 18-Years, We Cannot Grant Divorce To Husband As Marital Status Important For Indian Women" | Supreme Court

"Cant force parties to live together, but let her hv status of married woman. 5L u gave her, let her enjoy that"https://t.co/mrbmSFuyLy 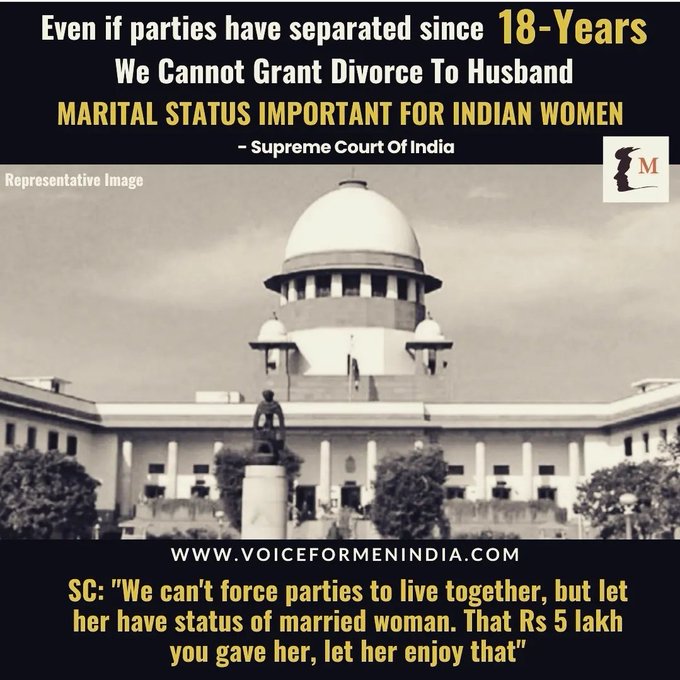