by Team VFMI
in GENDER STORIES, IN THE SOCIAL
0

India is a country where Adultery has been decriminalised, but archaic matrimonial laws drafted almost 50-100 years ago, make it impossible to dissolve a dead marriage. This is the real reason why we take pride in celebrating divorce rate in India at 1%!

Completely negating and almost dismissing the ground realities in 2022, Modi Government said that there is no proposal whatsoever to permit both parties to file for divorce on grounds of Irretrievable Breakdown in Marriage, reported PTI.

In reply to a written question, Law Minister Kiren Rijiju said that no proposal was under consideration “at present” to allow both parties to file for divorce on grounds of “irretrievable breakdown” of marriage.

The minister was asked whether restrictive provisions of the divorce law and the long delay in settlement of divorce cases were linked to a high proportion of separated individuals.

He was also asked whether the government proposes to make marriage laws more women-friendly and allow both parties to file for divorce on grounds of “irretrievable breakdown” of marriage.

Replying to these questions in the Lok Sabha earlier in August, Rijiju said,

It cannot be said with “any degree of accuracy” that provisions of the divorce law and long delays in settlement of cases are linked to the high proportion of separated individuals.

We are listing down several judgements and orders, where divorce cases have been dragged not for years, but decades due to ego of one estranged spouse (largely the woman). Divorce laws in India are inhuman towards the Men that compel them to stay in abusive dead marriages for life. If they dare to file for divorce, maintenance laws trap them for life, where even if they are the victims of domestic abuse, they need to pay their ‘cruel’ wives for life without divorce.

Men in India are also most scared of losing child access or visitation rights, since our country has still not adopted Shared Parenting as a norm, and it is easiest for the custodial parent (mother) to use children as tools to harass and suppress her estranged husband.

No Proposal To Allow Both Parties File For Divorce On Grounds Of “Irretrievable Breakdown” Of Marriage | Modi Govt@KirenRijiju : "Cant be said tht long delays in settlement of divorce cases are linked to high proportion of separated individuals" 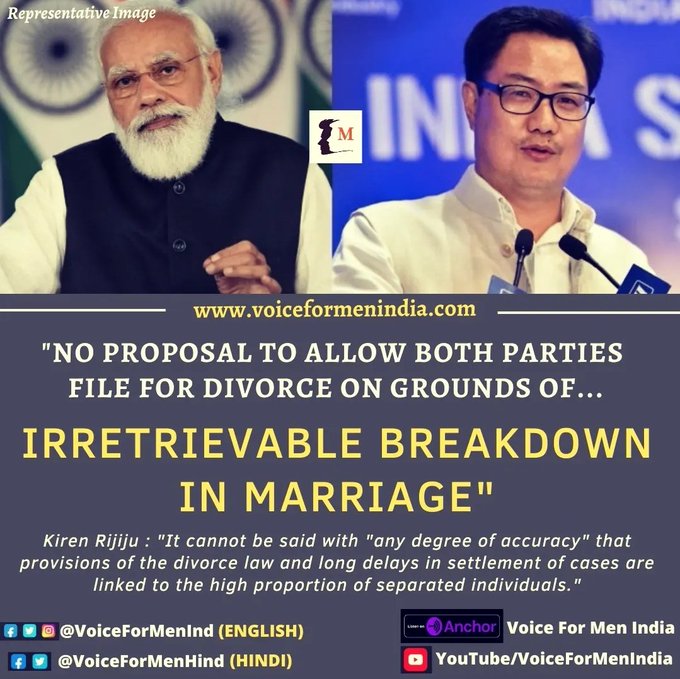 READ SOME OF THE DIVOCE MATTERS BELOW: