READ ORDER | 498-A IPC Can't Be Used As Weapon To Teach Lesson To In-Laws; Chhattisgarh HC Grants Divorce To Husband After 22-Years Of Separation (Representation Image Only)

This is not the first or the last time a High Court has called out gross misuse of Anti Dowry Law – Section 498A IPC. Once again, the Chhattisgarh High Court in its order dated July 13, 2022 observed that a wife cannot use Section 498-A IPC as a weapon to teach a lesson to the entire family of the husband to settle a matrimonial score with the husband.

The High Court granted divorce to the husband in the said case, after 22-Years of Separation. This is sheer abuse of Human Rights for any individual, who is legally tied down, to satisfy ego of estranged spouse (most often the disgruntled woman).

Marriage between parties took place in May 1995.

According to the husband, the wife was found to be suffering with Tuberculosis and she would often go to her maternal house. The applicant (husband) being a government doctor, could not always stay with her, therefore, for her benefit of health, she was sent to her parental house for treatment in 1995.

The husband alleged that his wife unilaterally got their child aborted without his consent. Thereafter, many a times, he wanted to bring her back home, however, she refused on one pretext or the other. It is stated that since she was not interested to stay with the husband, he filed an application for dissolution of marriage on February 1996.

The husband eventually withdrew divorce before the Court at Jagdalpur, however, again in November 1998 application for dissolution of marriage.

On the other hand, the wife also filed application in August 1996 before the Addl. Sessions Judge, Korba for dissolution of marriage which eventually was withdrawn in March 2004.

My Wife Stayed Only For 3-Days; Filed False 498A On Me, My Family Because She Wanted Divorce

It was pleaded that an FIR was lodged levelling false allegations against the husband and his entire family members, for which, a case was registered under section 498-A of IPC, thereby the appellant and his family members were put to harassment and in such adverse situation, the mother of appellant died in July 1999. Despite knowing about the demise of his mother, the wife did not even visit the husband. It is also stated that during the pendency of matrimonial case, the criminal case came to be finally decided in February 2006, wherein the order was passed acquitting the husband and his entire family members.

Subsequently the acquittal order was challenged by the wife in criminal revision before the High Court and eventually the said revision bearing CRR No. Cr.R.No.340/ 2006 was dismissed on 28.11.2019.

Learned counsel for the appellant referred to the pleadings made by him in application for divorce as also the contents of reply filed by the respondent and would submit that because of false report made by the wife, his entire family members were arrested. He would further submit that the acquittal order which was filed would show that false allegations were made and because of false report and initiation of subsequent proceedings, the reputation of the petitioner being a doctor was adversely affected in the society. Referring to acquittal order passed by the learned court below wherein the trial was conducted, he would submit that while acquitting the appellant along with all family members, the entire allegations were considered and the order was passed on merits.

The husband also submitted that there has been irretrievable breakdown of marriage as the parties have been living apart since 15.05.1996 which is admitted by the father of respondent that she is residing separately. He further submits that not only the complaint filed by the wife u/s 498-A came to be dismissed resulting into acquittal but also the complaint of bigamy filed u/s 494 IPC ended with dismissal.

The bench ofJustice Goutam Bhaduri and Justice Rajani Dubey observed the arguments and noted that there was an irretrievable breakdown of marriage that was beyond repairs.

With regards to false 498-A, the High Court commented,

Certainly it will have an adverse effect on the social standing of a family as it results in isolation of a person who faced criminal trials because of the false accusations made by the other spouse.

Therefore, before making such allegations, regard must be had to social status, educational level of the parties, and the society they move in, otherwise, such allegations would amount to cruelty.

The Court further noted that in the instant case, apart from the appellant-husband, his entire family members were inculpated, however, in the acquittal judgment of the Court, it was categorically found that the allegations were patently false.

The appellant is a Doctor and as stated during the course of the hearing, the respondent-wife is a private teacher. Therefore, facing a criminal case would always castigate a stigma in Society.

The report u/s 498-A of the IPC cannot be used as a tool to teach a lesson to the family members of the husband as it may adversely affect the future prospects of a young professional and it may take long time to fill up the gap.

Therefore, we are of the opinion that false accusations made by the wife against the entire family members under section 498-A would amount to mental cruelty and such conduct of respondent-wife which inflicts upon the appellant-husband such mental pain and suffering would make it not possible for her to live with the appellant-husband,” the Court further held as it granted a decree of divorce in favour of the husband.

Despite wife filing false 498-A and wasting precious prime years of nearly three decades for the man, the Chhattisgarh High Court granted permanent alimony to the woman. The Court concluded,

The appellant is a Government Doctor and the respondent is a teacher in a private school. Since the appellant is a Government Officer drawing salary from State exchequer and looking to the status of parties, in order to avoid further litigation between the parties, it would be appropriate for us to grant alimony of Rs 15,000 per month to the wife, which would be deducted from the monthly salary of appellant.

Accordingly, it is directed that the appellant shall pay maintenance of Rs 15,000 per month which the wife is entitled to received through the court below after making necessary deductions every month from the salary of the appellant.

READ ORDER | #498A Can't Be Used As Weapon To Teach Lesson To In-Laws; Chhattisgarh HC Grants Divorce After 22-YRS Of Separation 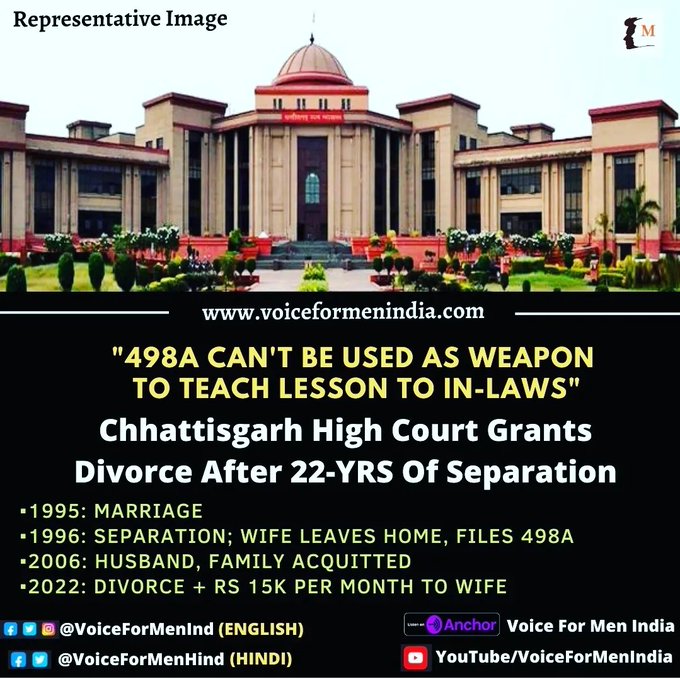