Wife Turned Accident Into Her Attempt To Die By Suicide | Mumbai Court Acquits Husband, His Parents From 498A IPC After 9-Years

Wife Turned Accident Into Her Attempt To Die By Suicide | Mumbai Court Acquits Husband, His Parents From 498A IPC After 9-Years (Representation Image)

Why Married Men in India are at the mercy of a mere statement by Wife, and thanks to our slow system burdened with endless frivolous cases, it often takes years and decades to prove oneself innocent.

In a case reported from Mumbai, a magistrate court has dismissed charges of Domestic Violence against a man and his parents, after nine long years of trial. All this while, the husband and his family were out on bail.

A 35-year-old man and his parents – who reside at Grant Road – were accused of domestic violence by his estranged wife of the man.

The wife claimed to have attempted to “die by suicide” by throwing herself in front of a running train in which she lost her right arm. However, as per statement by doctors and circumstantial evidence, it was an accident and not her attempt to suicide.

The woman moved Court under Section 498-A in July 2013, where she alleged that her husband’s family would physically and verbally abuse her. She further alleged that they would harass her to get money from her parents. Fourteen witnesses, including the woman, her parents, siblings, a doctor and cops, deposed during the trial.

The accused trio has been out on bail since 9-years. The Court, in 2022, said that the offences against them were not proved.

Going through evidences on record, a magistrate court found that the wife had actually met with an accident. The court relied on the statement that the woman had given to the doctor soon after the incident, which showed that it was an accident and not an attempt to suicide.

This gives a clear blow to the prosecution case that the informant (woman) has attempted to commit suicide. Therefore, the defence taken by the accused looks to be probable at once.

Even the doctor has admitted the probability that the injuries sustained by the informant (woman) are possible in a railway accident.

No Sexual Advances Made By Father-in-Law

The court also refuted the woman’s allegations that her father-in-law had made sexual advances by putting his hand on her shoulder when they went to the Gateway of India. The court noted that he was only enquiring about the estranged relationship between his son and her (daughter-in-law). To this, the Court noted,

Putting his hand on her shoulder and moving it around and asking her about her relations with her husband in the capacity of the head of the family will never amount to outraging her modesty in the history of disputes between her and her husband.

If he would have intended to do so, then he could have gone at any stage which could have clearly shown his intention to outrage her modesty.

It is because, though the informant (woman) is educated till graduation, she is unable to tell what sort of ill¬ treatment or trouble is given to her by her in-laws and the husband. There are no specific allegations either in respect of harassment or in respect of demand of dowry and the incidents of cruelty.

Therefore, the evidence of the informant cannot be made the basis for the conviction of the accused for the offence punishable under section 498(A) (cruelty) of the Indian Penal Code.

Wife Turned Accident Into Her Attempt To Die By Suicide | Mumbai Court Acquits Husband, His Parents From #498A After 9Years

Court: "Putting hand on her shoulder as head of family is not outraging her modesty"https://t.co/eozXklaadm 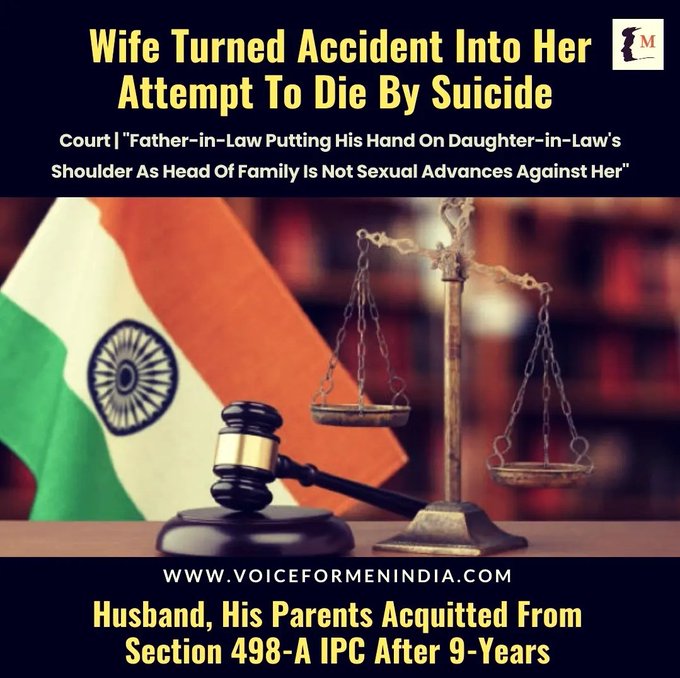