The Bombay High Court Nagpur Bench in its order dated October 04, 2022 refused to grant divorce to a husband stating that wife terminating pregnancy without his consent does not amount to cruelty.

The husband had filed for divorce on grounds of cruelty under the Hindu Marriage Act.

Parties got married in 2001. The couple has one (adult) son who was born in 2002. It is alleged by the 47-year-old husband that the wife aborted their second child without his consent and after leaving the matrimonial home in 2004, she did not return.

The husband filed for divorce in 2012, which has been rejected by the Bombay High Court in 2022.

Initially, the wife was harassing him for searching Teacher’s job and was also threatening that she would not bear a child, till she secures a job. In the meantime, the respondent/wife delivered a male child on 14/06/2002 at her maternal place. After spending of three months at maternal house after delivery, she resumed cohabitation at the house of the appellant/husband.

As per the contention of the appellant/husband, after birth of the child again wife started harassing him on the count that she wanted to start her tuition classes at Mehkar. Therefore, on 01/10/2002 he shifted to Mehkar along with the respondent/wife and son. Though he shifted to Mehkar, the respondent/wife had not started tuition classes, as she was busy with the baby.

In May 2004, the respondent/wife was four weeks pregnant, but she was not ready to carry her pregnancy and insisted on terminating the same. The appellant/husband was not ready for the same and tried to convince her but the respondent/wife did not agree to him. When he confronted his mother-in-law, she asked him to send their daughter to her parental home and they would take care of everything. This is when the wife left along with her son and all her belongings. Despite husband’s request asking wife to return with their son on his (son’s) birthday, the wife did not turn up.

Between 2004 and 2012, husband tried to convince wife multiple times to return, however, she refused to do so. By now, she had already secured a job as a teacher with a local school.

When all efforts failed, he filed for divorce in 2012.

The appellant/husband had not made any provision for her and her son’s livelihood. Therefore, she secured employment in Ashram Shala at village Bahiram in order to maintain her and her son. She further alleged that the appellant/husband and his sisters were suspecting her character and, therefore, she constrained to leave matrimonial house. She denied that the appellant/husband had taken several efforts to fetch her back for cohabitation. Her contention is that as she was constrained to leave the matrimonial house she preferred the petition for restitution of conjugal rights in the Court of Civil Judge, Senior Division, Achalpur which was subsequently transferred to the Family Court, Buldana.

Being aggrieved and dissatisfied with the judgment passed by the Family Court, Buldana, husband approached High Court.

At the outset the division bench of Justices Atul Chandurkar and Urmila Joshi-Phalke held that it cannot be borne out from the statements of witnesses that the husband made any attempt to bring the woman back into the matrimonial home before filing the petition in 2012.

The question before High Court remained whether a woman’s decision to terminate her pregnancy without her husband’s consent can be termed as cruelty under the Hindu Marriage Act. The bench observed,

A woman cannot be forced to give birth to a child.

Even the contention of the appellant/husband is accepted as it is, it is well settled that the right of a woman to have reproductive choice is an insegregable part of her personal liberty as envisaged under Article 21 of the Constitution of India.

The bench added that even if the husband’s allegations were taken at face value, the wife cannot be accused of cruelty for making a reproductive choice.

The High Court also held that a woman wanting to go for work after marriage wouldn’t be termed as cruelty.

Subsequently, the bench dismissed the appeal filed by the husband against a family court’s order allowing the wife’s plea for restitution of conjugal rights and dismissing the husband’s petition for divorce u/s Section 13(1)(ia) and 13(1)(ib) of the Hindu Marriage Act.

▪️HC: Neither husband had adduced evidence that wife terminated pregnancy nor wife proved pregnancy was terminated due to sicknesshttps://t.co/gF8pAy5K0f 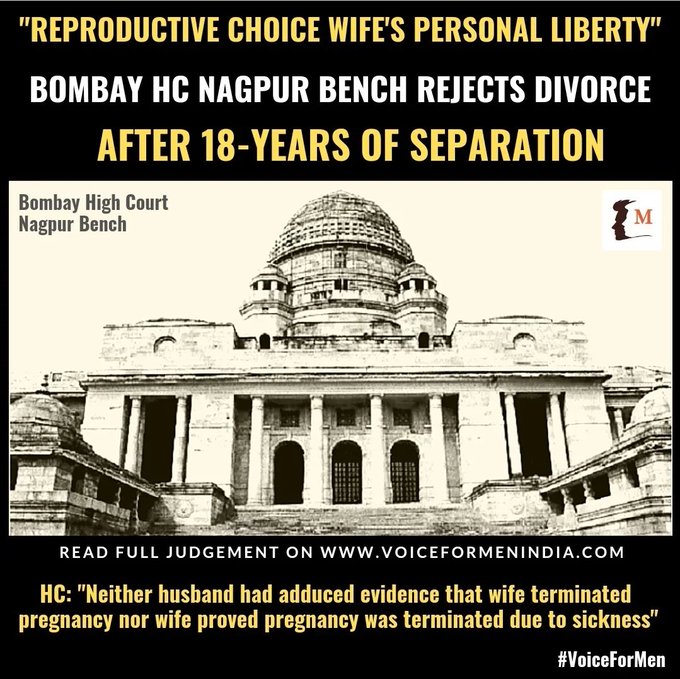