by Arnaz Hathiram
in IN THE LAW, SUPREME COURT
0

A lot of random media debates have already taken place on the below Supreme Court Judgement (Sep 29, 2022) today.

Many have painted the matter, as if the Court has allowed abortion in a rape case. This is absolutely misleading. Let us break it down for you and analyse what was the matter and what did the Judges say.

This case pertains to an appeal filed by an unmarried woman against a July 2022 order, where the Delhi High Court did not permit her termination of 24-week-old foetus. The appellant is a resident of Manipur and currently residing in Delhi.

The Delhi High Court in July 2022 had refused relief to the woman, holding that an unmarried woman who is carrying a child out of a consensual sexual relationship cannot be permitted to terminate pregnancy older than 20-weeks. By its order dated July 15, 2022, the Delhi High Court said,

The Petitioner, who is an unmarried woman and whose pregnancy arises out of a consensual relationship, is clearly not covered by any of the Clauses under the Medical Termination of Pregnancy Rules, 2003. Therefore, Section 3(2)(b) of the Act is not applicable to the facts of this case.

Learned counsel for the Petitioner states that Rule 3B of the Medical Termination of Pregnancy Rules, 2003 is violative of Article 14 of the Constitution of India, 1950, in as much as it excludes an unmarried woman. Whether such rule is valid or not can be decided only after the said rule is held ultra vires, for which purpose, notice has to be issued in the writ petition and has been done so by this Court. 10.

As of today, Rule 3B of the Medical Termination of Pregnancy Rules, 2003, stands, and this Court, while exercising its power under Article 226 of the Constitution of India, 1950, cannot go beyond the Statute. Granting interim relief now would amount to allowing the writ petition itself.

Submissions Made By Doctor

Dr. Amit Mishra, learned counsel appearing on behalf of the appellant made the following submissions:

A Bench of Justices DY Chandrachud, AS Bopanna, and JB Pardiwala on September 29, 2022 overturned the decision of the Delhi High Court which had declined to permit the abortion.

Allowing the plea, the Supreme Court observed that the Delhi High Court took an unduly restrictive view in interpreting the MTP Act and Rules.

The Supreme Court on Thursday said that for the purposes of the Medical Termination of Pregnancy (MTP) Act, marital rape has to be considered as falling within the meaning of ‘rape’ in order to save women from forceful pregnancy.

The bench further added that any pregnancy alleged by a pregnant woman to be caused by force is rape notwithstanding the exception to marital rape under Indian Penal Code (IPC). The bench observed,

Notwithstanding Exception 2 to Section 375 of the IPC,85 the meaning of the words “sexual assault” or “rape” in Rule 3B(a) (of MTP Rules) includes a husband’s act of sexual assault or rape committed on his wife.

The meaning of rape must therefore be understood as including marital rape, solely for the purposes of the MTP Act and any rules and regulations framed thereunder.

Any other interpretation would have the effect of compelling a woman to give birth to and raise a child with a partner who inflicts mental and physical harm upon her.

The Court emphasised that married woman may also form part of class of survivors.

With regards to the term ‘Rape’, the top court said,

Rape means sexual intercourse without consent and intimate partner violence is a reality. In this case also woman may get forcefully pregnant.

The Supreme Court added that the meaning of rape must, therefore, be understood as including marital rape, for the purpose of the MTP Act and any rules and regulations framed under the Act.

On the matter of Marital Rape, the apex court further said,

It is only by a legal fiction that Exception 2 to Section 375 of the IPC removes marital rape from the ambit of rape, as defined in Section 375.

The Court, however, clarified that understanding “rape” under the MTP Act and the rules as including marital rape does not have the effect of striking down Exception 2 to Section 375 of the India Penal Code (IPC) or changing the contours of the offence of rape as defined in the IPC.

Speaking about pendency of the Marital Rape PIL, the Supreme Court said,

Since the challenge to Exception 2 to Section 375 of the IPC is pending consideration before a different Bench of this Court, we would leave the constitutional validity to be decided in that or any other appropriate proceeding.

▪️SC states MR in the judgement, almost confirming their view on pending PILhttps://t.co/WqXldphXQL 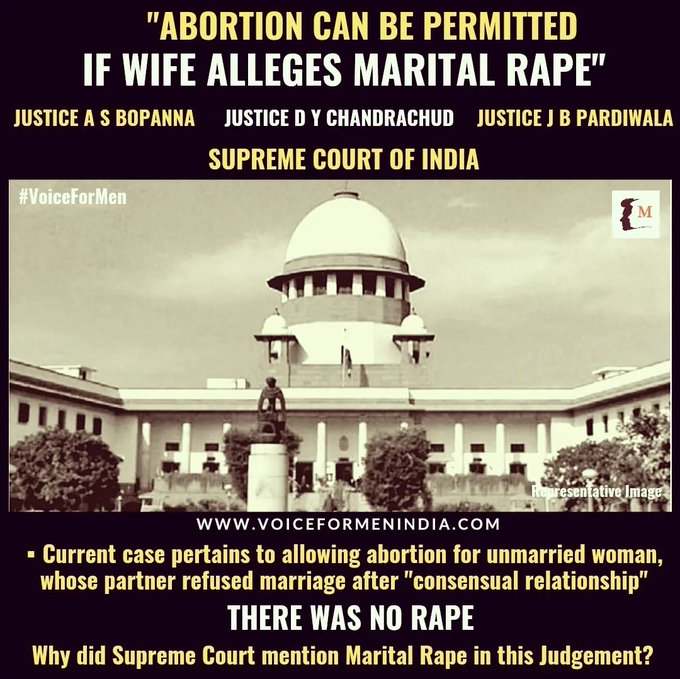