by Team VFMI
in ALIMONY, IN THE LAW, IN THE NEWS, SUPREME COURT
0

Supreme Court on one hand calls for Gender Equality, but ironically holds only and only the Husband as the sole provider for his family.

In its recent judgement dated September 28, 2022, the top court ruled,

A husband is required to earn money “even by physical labour” to meet his sacrosanct duty to provide financial support to the estranged wife, minor children and couldn’t avoid his obligation.

This matter pertains to maintenance under Section 125 CrPC, which entitles a married woman for lifelong maintenance, unless she remarries. This maintenance is awarded to the woman, even if she chooses to live separately and does not consent to divorce after years and decades of separation.

Parties got married in December 1991 as per the Hindu rites and have two children i.e., daughter (1992 born) and one son (1999 born). Wife had left her matrimonial home along with both children in 2010 and subsequently approached court for maintenance under Section 125 CrPC.

Wife – appellant No. 1 accused her husband and his family of utmost cruelty, physical and mental torture. As a result thereof, she had to leave her matrimonial home along with children time and again. Allegations were also made against the respondent that he was demanding Rs One crore as dowry from her father. Ultimately, the appellant along with her children left the matrimonial home in 2010 and started residing in a rental premises.

READ JUDGEMENT | Maintenance Awarded Must Be Reasonable & Realistic; Objective Of Alimony Is Not To Punish Other Spouse: Supreme Court

In 2016, Family Court after appreciating the said evidence on record passed the order rejecting the application of of maintenance to the wife. Maintenance was also rejected for the daughter who had attained majority, however, an allowance of Rs 6,000 per month was awarded for the minor son.

In 2018, the high court had also dismissed the Revision application filed by the appellants, challenging the order passed by the District Judge, Family Court, Faridabad. The wife subsequently moved Supreme Court.

At the outset, the bench of Justices Dinesh Maheshwari and Bela M Trivedi elaborated the conditions of maintenance under Section 125 CrPC. The bench observed,

Maintenance u/s 125 CrPC is a measure of social justice that was specially enacted to protect women and children.

The top court refused to accept plea of a husband who submitted he had no source of income as his party business has now been closed.

The respondent (husband) being an able bodied, he is obliged to earn by legitimate means and maintain his wife and the minor child.

Accordingly, the apex court ordered the husband to pay (with retrospective effect):

The Supreme Court also pulled up the family court to deny maintenance to the woman and her children after she left the matrimonial home and started living separately and said that the court was not alive to the objects and reasons, and the spirit of the provisions under Section 125 of the code.

The Court even went on to add,

The family court had disregarded the basic canon of law that it is the sacrosanct duty of the husband to provide financial support to the wife and to the minor children.

The husband is required to earn money even by physical labour, if he is an able-bodied, and could not avoid his obligation, except on the legally permissible grounds mentioned in the statute.

In Chaturbhuj vs Sita case, it has been held that the object of maintenance proceedings is not to punish a person for his past neglect, but to prevent vagrancy and destitution of a deserted wife, by providing her food, clothing, and shelter by a speedy remedy.

The bench was also not satisfied the way Punjab and Haryana high court ‘casually’ passed the order by upholding “an erroneous and perverse order of family court”.

The entire amount of arrears shall be deposited by the respondent in the Family Court within eight weeks from today, after adjusting the amount, if any, already paid or deposited by him. 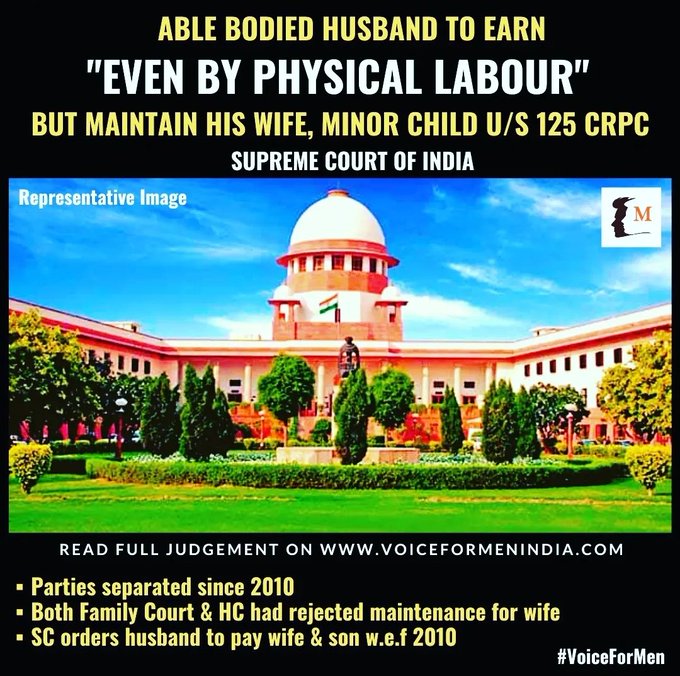