by Team VFMI
in CRIME HAS NO GENDER, HIGH COURT, IMPACT ON CHILDREN, IN THE LAW, IN THE NEWS, NON TIER-I CITIES
0

The Allahabad High Court in its order dated November 04, 2022 has observed that the statement of a 13-year-old boy would be prima facie sufficient ground to summon the accused as per Section 204 CrPC.

Additional Sessions Judge/Special Judge (POCSO Act), Jaunpur had issued a summoning order to the accused woman Arti Devi after taking cognizance of the complaint moved by the father of the victim boy by way of filing an application under Section 156 (3) CrPC.

Challenging this summoning order, the accused woman moved to the High Court.

Counsel for the accused woman argued that a prima facie case was not made out against her and that the victim had not narrated any act of sexual assault. It was also argued that the nature of the allegations are improbable so much as the applicant being a lady could not commit such an act.

On the other hand, the counsel for the state argued that the summoning order was proper as the victim had stated that the accused (a lady) had committed ‘गन्दी हरकत‘ which may fall under the definition of Section 7 (Sexual Assault) of the POCSO Act.

The bench of Justice Saurabh Shyam Shamshery clarified that such an act, if the commission of the same is proved in the trial, could amount to an offence under Sections 7 and 8 of the POCSO Act as even touching a private part of a child with sexual intent may fall under ‘sexual assault’ under Section 7 of POCSO Act.

The high court took the statement of the minor boy on record clubbed with the fact that the Magistrate had taken note of the submissions of the complainant and victim, the Court preferred not to interfere with the POCSO court’s order. The high court thus observed,

Considering the statement of the 13-year-old boy that the applicant has committed an act being ‘गन्दी हरकत’ would be prima facie sufficient ground to summon the applicant for the offence under Section 7 and 8 of POCSO Act as even touch to a private part of a child with sexual intent may fall under ‘sexual assault’ under Section 7 of POCSO Act. The question of presence of ‘sexual intent’ will be the subject matter of trial.

▪️Accused woman's counsel: "Nature of allegations are improbable as applicant being lady couldn't commit such act"#VoiceForMenhttps://t.co/VVbf72wwIW 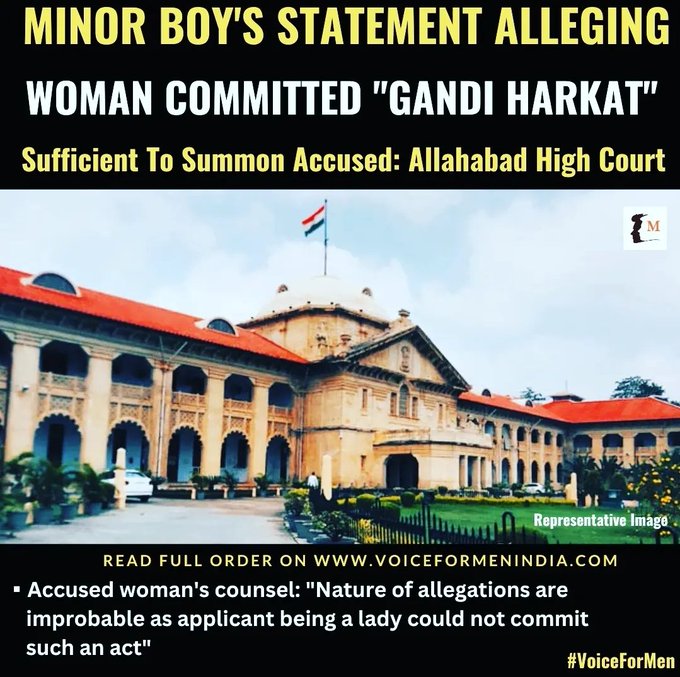