by Team VFMI
in ADULTERY, CRIME HAS NO GENDER, IMPACT ON CHILDREN, IN THE NEWS
0

When an adult man is in consensual relationship with a minor girl, he is charged for rape under POCSO (Protection Of Children from Sexual Offences). However, reverse the Genders, and society says ‘Love Is Blind’!

Such is one case reported from the Churu district in Rajasthan, where a 35-year-old married woman fell in love with a 17-year-old boy. Not just this, the married woman also re-married this minor boy, without securing divorce from her husband.

A 35-year-old married woman fell in love with a 17-year-old minor boy. This boy also happens to be the woman’s nephew.

The woman’s husband approached Sadar police station and registered a complaint against his wife for remarriage, without taking divorce from him.

The husband informed police that the duo had been married since 10-years and both of them enjoyed a happy relationship. The couple also has two children and according to the aggrieved husband, there were no issues of dispute in the family.

However, the husband alleged that his wife’s nephew had visited their home sometime ago, and also spent somedays with them. It is then that the wife and her nephew developed an extra-marital affair, post which the minor boy started frequenting their home often.

If I had to go for family functions or anywhere, my nephew used to stay with us. My wife and her nephew would bond and have fun together, but we never doubted any ill intentions since they were a family.

Soon, this relationship developed into love and the husband expressed how his wife did not even think that her nephew was not even half her age.

The relationship had reached to a point, where his wife and her nephew secretly got married to each other, without any formal divorce from the husband.

According to the husband, his wife did not let any other family members know of this illicit relationship, however, after getting married to the minor boy, she intimated the husband how she had settled down again and wanted to spend her life with the 17-year-old boy.

Soon the news of this marriage spread across, and both side families were left in shock. Despite everyone trying to convince the woman and the minor boy, both remained adamant and insisted that they wanted to be together.

The family also tried to convince the woman, that the boy was a minor and could not understand life so much, however, as a mother of two children, she should understand the complications.

After several efforts trying to convince the woman and the minor boy, the wife bluntly informed her husband and in-laws that she would not return.

▪️Woman was married for past 10-years & is mother to two children who she left behind with husband & in-laws#POCSOhttps://t.co/82l1Jf9sVO 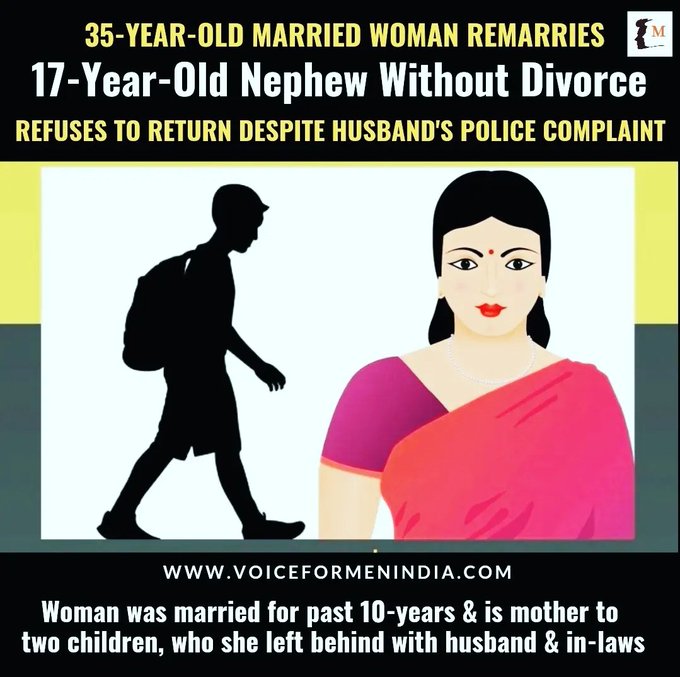