The Delhi High Court in its order dated October 29 directed a woman to return an Audi Q7 Car to a private company while hearing a matrimonial dispute matter.

The high court ruled the corporate vehicle cannot be permitted to be lifted to hold that even though the vehicle belongs to the company, it is owned by her husband.

This is a case of matrimonial dispute where the petitioner is a company of which 75% shares were held by respondent No. 3 (husband). The petitioner company is engaged in business of construction, real estate. However, even after the resignation of the husband, his estranged wife refused to return the company car.

However, on July 19, 2021, respondent No. 2 (his wife) took the car from the possession of the petitioner having original title documents of 24 properties of the clients of the petitioner. Since the petitioner was not aware of the whereabouts of their Audi car, they filed a complaint at Sector 49, Noida Police Station with respect to the theft of the Audi car.

On 01.08.2021, an FIR was registered at Sector 49, Noida Police Station, under Section 379 IPC qua theft of the Audi car and original title documents of the 24 properties.

In September 2021, the MM Court directed that the said Audi car will remain in power and possession of the wife till the matter is heard on merits.

On 18.10.2021, an application was filed by petitioner company seeking review of this order, however, the same was dismissed by the MM Court. The Court was of the view that they did not have power of review under Protection of Women from Domestic Violence Act. In addition, the MM Court was of the view that assuming that the powers of Section 25 (2) of the Domestic Violence Act permitted alteration/modification of the order, the petitioner, i.e. the intervener before the learned MM Court had no locus standi to move the application as it was neither an aggrieved person within the meaning of the Act nor the respondent.

The counsel representing the company argued before the court that it is suffering at the hands of the couple without any fault. The court was also told that certain original property papers were lying in the car and one person has initiated criminal proceedings against the company in this regard.

However, the counsel representing the wife called it a proxy litigation and told the court that she will return the Audi, if he agrees to provide a BMW car. It was also argued that he resigned from the company only to play mischief with the court and deprive her of the benefits of the MM Court orders.

Setting aside the Mahila Court order permitting her to retain the car, Justice Jasmeet Singh ordered the wife to return the Audi car back to the petitioner. The judgement read,

This order is only for the return of the Audi car and in no way determines the right of respondent No. 2 [wife] to seek maintenance, right of residence commensurate with her stature and her living lifestyle, from respondent No. 3 [husband]. She shall be at liberty to initiate any/all such proceedings for getting a car/maintenance for herself and her children which if already filed or which may be filed in future, shall be determined in accordance with law.

Justice Singh rejected the argument that the company should have filed an appeal under Section 29 of the Protection of Women from Domestic Violence Act and said the company is neither a respondent nor an aggrieved person in those proceedings. The court clarified that a woman under Section 12 of the Domestic Violence Act can only have a grievance only against her husband. The judgement read:

Section 19 and 22 of the Act entitles the respondent No. 2 [wife] with right of residence as well as relief of compensation and damages against the respondent who has been defined under Section 2(q). The petitioner company does not come within the ambit of the said definition. The lifting of corporate veil and to hold that the Audi car even though belongs to petitioner company but in fact belongs to respondent No. 3 [husband], would not be legally tenable. The company and its shareholders and Directors are separate legal entities.

On the argument that the husband has been fraudulently showing incorrect dates of resignation, the court said the same is irrelevant for the purpose of adjudication as the proceedings in the case cannot be brought within the ambit of the phrase “fraud”. The Court added,

The Delhi High Court thus ordered the wife to return the Audi car to the petitioner company within one week. 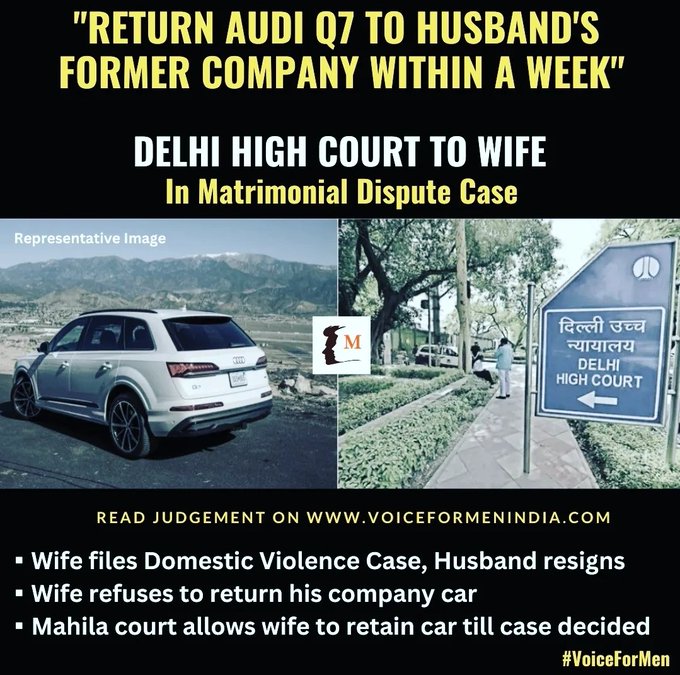 Can Separated Men Get Into Live-in Relationship During Pendency Of Divorce Case? | Shonee Kapoor