The Delhi High Court on Tuesday, once again observed how a serious view needs to be taken of incidents of false cases filed against husbands and their entire families to ensure that social fabric is not ruined and if such acts are allowed. The High Court emphasised that such cases may lead to further misuse of the process of law.

The Delhi High Court was hearing a matter where a false incident of the suicide of a woman was reported and a case of cruelty under provisions of dowry law was lodged against her in-laws and husband who was also incarcerated.

However, shockingly, the woman was very much alive and false information regarding her suicide was given, after which a case was lodged against her in-laws and her husband was arrested.

The husband and his family were jailed on charges of cruelty, abduction to murder, and provisions of the Dowry Prohibition Act.

Subsequently, mother of the husband filed another FIR alleging extortion by her son’s wife, by hatching a conspiracy with her family members, planning her disappearance from the matrimonial house and giving false information of her suicide.

It was then that the brother of the allegedly deceased woman approached the high court seeking anticipatory bail in the cheating and conspiracy FIR lodged against him and his family.

As per the case of the prosecution, aforesaid FIR was registered on the complaint of Ms. Brijesh Devi wife of Dharmender Singh on 26.12.2020 wherein she alleged that Ms. Komal daughter of Shri Anil Talan (petitioner in the present petition) was married to her elder son Abhishek Kumar on 20.04.2018.

Further, Komal Talan was not willing to live with Abhishek Kumar and in order to extort money from them, she hatched a conspiracy in association with her family members including the present petitioner and her friend Tushar Chaturvedi. In order to execute the plan to disappear from the matrimonial home, she gave false information regarding her suicide.

In between, the family members of Komal Talan registered a case bearing FIR No.1479/2019 dated 06.07.2019 under Sections 498-A/364 IPC and 3/4 Dowry Prohibition Act at PS: Indirapuram, Ghaziabad, UP against Abhishek Kumar and other family members. Abhishek Kumar was consequently arrested and is presently on bail in the aforesaid case.

Woman Found Alive After 12-Years, While Six Persons Spent Several Years In Jail For Her Murder

The Delhi High Court refused to give anticipatory bail to the allegedly deceased woman’s brother, considering the grave nature of the allegations and the fact that criminal proceedings under Section 364 (kidnapping or abduction in order to murder) IPC were falsely initiated in connivance. Justice Anoop Kumar Mendiratta said,

A bare perusal of aforesaid factual position reveals that to wreak vengeance for oblique motive, the incident of alleged suicide was fabricated. The same not only led to ignominy, adverse media coverage, and misery for the family of the complainant but also resulted in undue incarceration of the woman’s husband.

The criminal proceedings were initiated as a gross abuse of the process of law. The implication and consequences of such conduct may not have been fully visualised by the petitioner at the aforesaid time but the uncalled-for detention of the woman’s husband definitely ruined the chances of settlement. The law appears to have been used as a weapon than a shield by fabricating the incident of disappearance and suicide.

I am of the considered view that a serious view needs to be taken of such incidents to ensure that social fabric is not ruined by such fabrication of facts. If false implication by fabricated omnibus allegations against entire family in the course of matrimonial disputes and differences, is allowed, it may lead to further misuse of the process of law and assume serious proportions.

The high court noted that interim protection from arrest to the woman has already been denied during the pendency of her anticipatory bail in the cheating case. It concluded,

At this stage, it cannot be ignored that the woman was in touch with the family members during the aforesaid period and consequently her husband Kumar remained in custody. Also, the matter appears to have been highlighted in media on the basis of the alleged suicide note, which the prosecution seeks to recover.

Husband arrested on wife’s allegations, but no arrest for wife for faking her own kidnapping and suicide

On one side, we often cry how Women don’t have laws in India; while reality is Husbands and their families are arrested on verbal allegations of suicide and dowry death, even without recovering the Wife’s body.

LEAVE YOUR THOUGHTS ON THIS CASE BELOW: 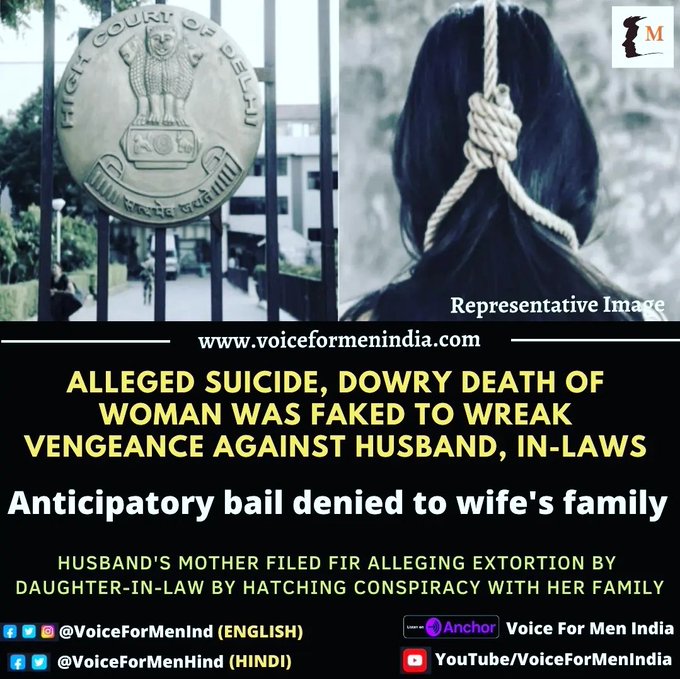