Yet another #HusbandSuicide has been reported, this time from Rajasthan. The victim was an airforce officer posted in Jammu who had come home for his leave.

The victim left a suicide note alleging mental harassment by wife and in-laws.

CPL Nirmal Kumar (30), a resident of Sikar District in Rajasthan, had joined Indian Air Force in 2011. He married Hemlata in the year 2019. The couple was living in Jammu, where Kumar was currently posted. Last month, husband had left his wife at her maternal home in Shivganj at Rajasthan. The couple did not have any children.

On October 2, Nirmal had returned home for a day’s leave. However, the next morning, he was found hanging in his room. When Nirmal’s mother entered the room, she saw her son hanging from the noose.

Hearing the mother scream out of shock, neighbours turned up immediately and took Nirmal to Kalandri Hospital, where doctors declared him brought dead. Subsequently, police took charge of the case.

Nirmal’s family members lodged a police complaint at 11pm on October 3, 2022 after brother of the deceased came in from Ahmedabad. The police also informed the Jammu Air Force officials about the death.

Nirmal left a suicide note on a Rs 50 stamp paper. The note read:

Airforce job is a job of honour, but I am indulging in a cowardly act like suicide. Please inform my officers that I was bitten by a snake and did not die by suicide.

The police handed over the body to his relatives after conducting postmortem on October 4 morning. According to his last wish, he wanted to be dressed in a pacharangi safa (multicoloured turban).

Don’t invite anyone from my in-laws’ house.

Accusing his wife and in-laws in the suicide note, Nirmal wrote,

My wife and in-laws used to torture me mentally. Due to this I am ending my life.

I have lot of money in my account. Take it out whenever needed.

Along with the suicide note, a diary has also been found, in which Nirmal has written about his daily routine.

Indian Army Officer Dies By Suicide Within One Year Of Marriage As Wife, In-Laws Allegedly Harassed Him Rs 15 Lakh Alimony

Mount Abu Air Force officer Anil Kumar reached Nirmal Kumar’s house with the team and his funeral procession was taken out along with state honours. The Air Force personnel saluted at the crematorium, followed by the funeral.

Other Side Of Beti Bachao | Sonipat Family Dies By Suicide Due To Alleged Harassment By Daughter-in-Law, Her Family

Leave Your Comments below:

▪️Suicide Note: "Airforce job is job of honour, but I'm indulging in cowardly act like suicide. Pl inform my officers that I was bitten by snake"https://t.co/1Yz6mJxB1p 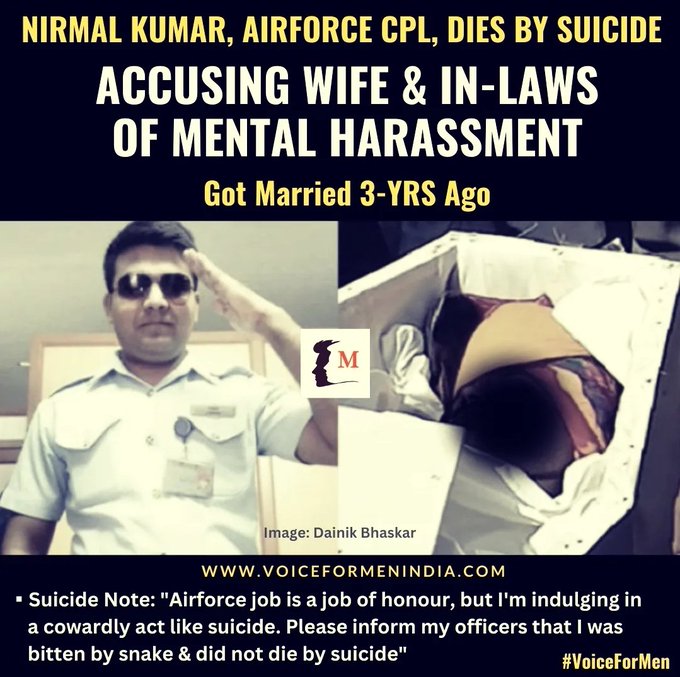