The Delhi High Court in its order dated July 18, 2022 quashed a false rape FIR registered by a woman, since ‘she was misguided and given wrong advice’. The parties had approached court after signing a compromise deed.

The High Court agreed to quash the same, subject to ‘the complainant woman doing social service in a blind school for two months.’

The complainant woman had filed an FIR in April 2022 accusing the petitioner of offering her cold drink and raping her after she fell unconscious. However, both parties signed a compromise deed dated 24.05.2022, wherein paragraph 1 of the compromise states as under:

The Parties, have now settled all their grievances and disputes without any force, undue influence or coercion from any side, out of their sweet/free will and choice and the parties are not under collusion.

Justice Jasmeet Singh heard the matter and was of the opinion that conduct of complainant woman was very unfair and a total abuse and misuse of the process of law.

Justice Singh also opined that the woman had been very unfair in her conduct and that the criminal justice system was put in motion on account of her whims and fancies which need to be deprecated. The Court noted,

However, I cannot lose sight of the fact that respondent No. 2 is staying with her family and has 4 children (one daughter aged 12 years and a set of triplets aged around 3 years.

READ ORDER | Rape Charges Can Be Quashed On Account Of Settlement Between Parties: Karnataka High Court

Woman Asked To Do Social Service

The complainant woman will assist and help to the best of her ability and in spirit of the order passed today.

While quashing the FIR, the Court also directed the petitioner (accused man) to plant 50 trees in consultation with the Investigating Officer, in city’s Rohini Zone. The High Court directed,

Each tree shall have a nursery life of 3 years and the petitioners will look after their respective allotted trees for 5 years. The learned SC, for the State shall be informed with regard to each and every step in this regard.

The 6 monthly status report along with photograph shall be filed. The above planting of trees shall be completed within a period of 6 weeks from today.

Has Judiciary In India Totally Collapsed For Men? Leave Your Comments On This Case Below: 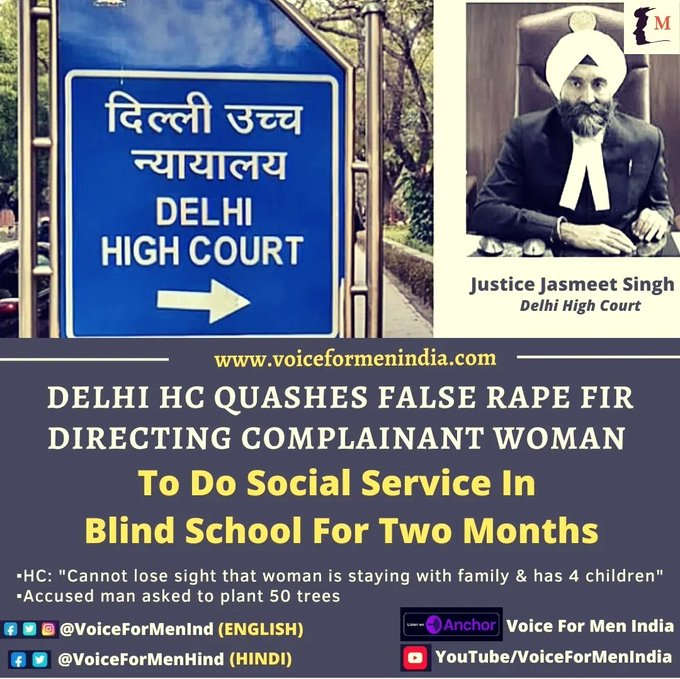