by Team VFMI
in ALLEGED FALSE RAPE, GENDER STORIES, IN THE NEWS, IN THE SOCIAL
0

Remember the infamous Vishnu Tiwari False Rape Case? In what seems to be an affirmative approach towards Justice for Women, the same could end up becoming a reason for many innocent lives destroyed.

The Uttar Pradesh government of Friday passed the Code of Criminal Procedure (Uttar Pradesh Amendment) Bill, 2022, that denies granting of anticipatory bail to rape accused and those booked under the Protection of Children from Sexual Offences (POCSO) Act.

Contents of the Bill

The Bill that was tabled in the House on Thursday proposed an amendment in Section 438 of the CrPC, 1973, with regards to the state. The section defined the powers of the high court or a sessions court to give anticipatory bail.

Parliamentary Affairs Minister Suresh Kumar Khanna told the House that denying anticipatory bail in sexual offences against young people and women will reduce the chances of the accused destroying the evidence.

No anticipatory bail in Uttar Pradesh for crime against women, kids pic.twitter.com/q3ONHX1jh7

In a press statement the State Government said,

In pursuance of zero-tolerance policy towards crimes against women and children, it has been decided to make the necessary amendment to ensure prompt collection of biological evidence in sexual offences, prevention of biological evidence from being obliterated, minimising the possibility of destruction of relevant evidence and to restrain the accused from causing fear or coercing the victim(s) or witness(es).

The amendment could help in preventing the accused from intimidating the witnesses and the victim and influencing the evidence.

Man backing out from marriage after consensual relationship, can be charged for rape by his disgruntled girlfriend

Govt needs to review this billhttps://t.co/IWTFbycfDs 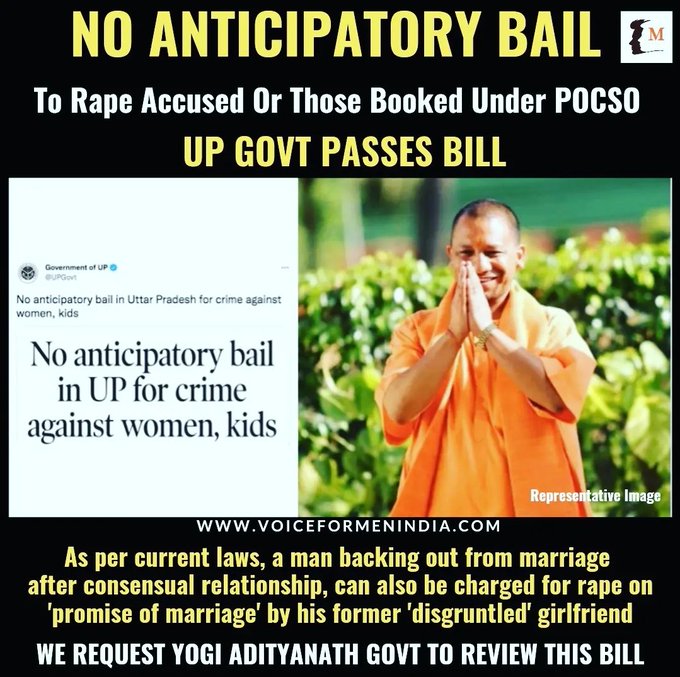