The Lucknow Bench of the Allahabad High Court in its order dated July 19, 2022 quashed a criminal case against five men from the same family, namely, four real brothers, and their 81-year-old father. All were booked for allegedly gang-raping a married woman, who is a mother to two grown-up children.

Concluding that the impugned proceedings were nothing, but an abuse of process of the court to falsely implicate the petitioners, the High Court quashed the present proceedings.

Present petition has been filed under Section 482 Cr.P.C. seeking quashing of proceedings for the order dated November 2014. The allegation against the petitioners, who are four real brothers, and their 81-year-old father, was that they had gang-raped the prosecutrix, a married woman, having two grown up children, aged around 13 years and 11 years.

The UP police after investigating the offence submitted final report exonerating the petitioners and their father for committing the offence. Since, the prosecutrix was not satisfied with the said final report, she filed a complaint before the Uttar Pradesh State Women Commission, Lucknow. The Uttar Pradesh State Women Commission, Lucknow then directed the Superintendent of Police, Lakhimpur Kheri to submit a detailed report in the matter.

In March 2012, the Superintendent of Police, Kheri, submitted a report before the Uttar Pradesh State Women Commission, Lucknow specifically stating that the case set up by the prosecturix, was completely a false case. The prosecutrix wanted to persecute the petitioners with malafide intention, and the report lodged by the prosecutrix was in retaliation of the report lodged against her husband and other relatives.

It was said that the Investigating Officer after investing the offence, found that the case set up by the prosecutrix was completely a false case and recommended for taking action under Section 182 IPC against the prosecutrix.

The prosecutrix subsequently filed a protest petition, which was treated as a complaint case and after recording the statements of the prosecutrix and witnesses, the petitioners were summoned to face the trial for the offences under Sections 366, 452 and 376 IPC. The trial court framed charges on in November 2014.

The bench of Justice Dinesh Kumar Singh went through the evidences on record in detail and observed that it was not believable that four real brothers and their father would commit rape on a woman having two grown up children. The Judge found it necessary to observe,

It is relevant to mention here that an FIR under section 363 read with section 366 IPC came to be registered on complaint of one of the accused persons, whose minor daughter was allegedly abducted by the husband of the prosecutrix and other relatives named in the FIR.

As a measure of retaliation and vengeance, the prosecutrix has lodged these proceedings though the police did not find any evidence for commission of the offence by the four real brothers and their father.

The Court considered all facts submitted along with police report and concluded,

Considering all these facts and also taking into account the report submitted by the Superintendent of Police, Kheri to the Uttar Pradesh State Women Commission, Lucknow, this court finds that the impugned proceedings are nothing but an abuse of process of the court to falsely implicate the petitioners, who are the real brothers, and their father, aged around 81 years for the offence under Section 376 IPC.

The petition was allowed and the impugned proceedings of Sessions Trial pending in the court of the Additional Sessions Judge, Lakhimpur Kheri were quashed.

▪️"As a measure of retaliation & vengeance, prosecutrix lodged proceedings though police did not find any evidence"https://t.co/9xWQ2HJ6XN 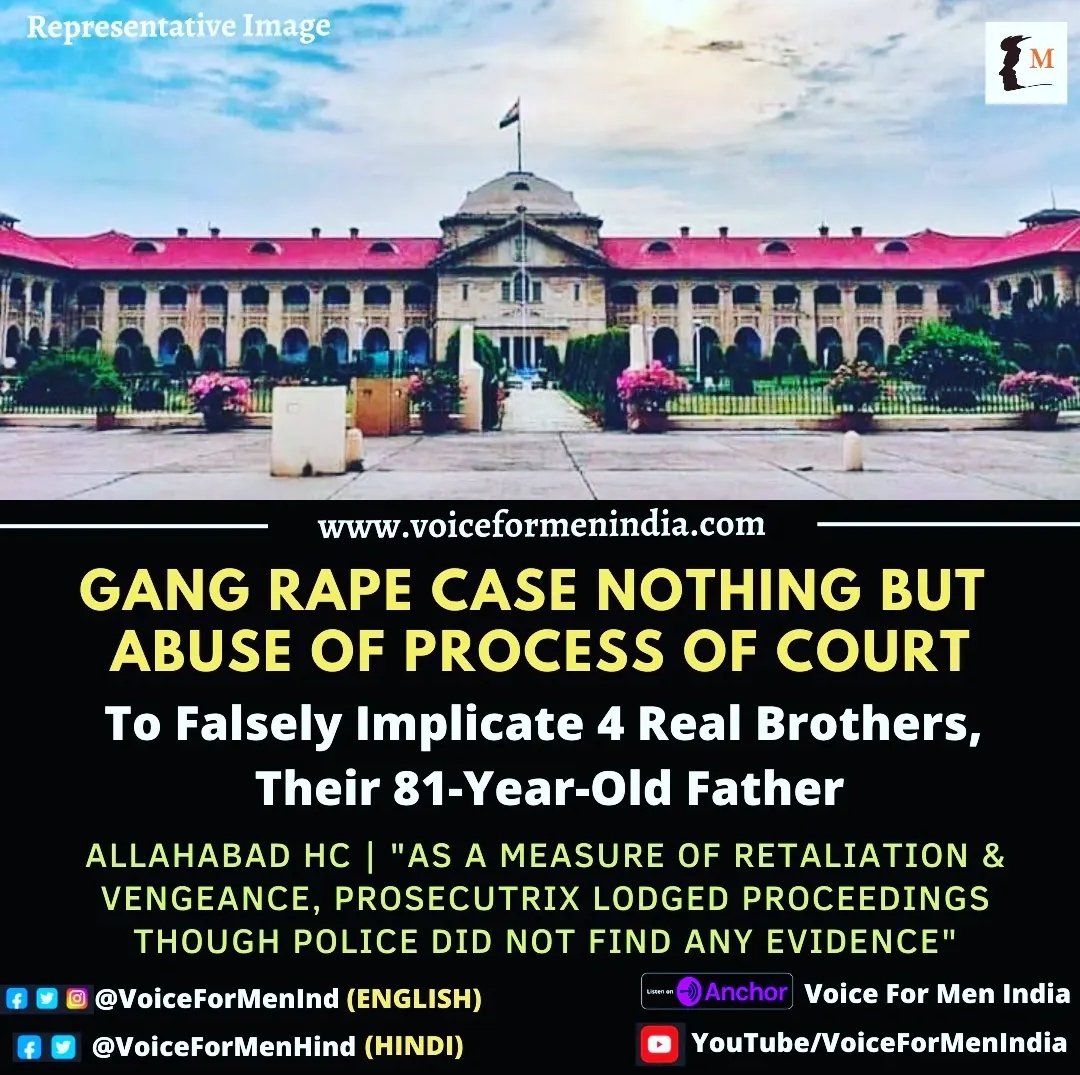 READ ORDER: Srinivas And Ors. v. State of U.P. and Another
Srinivas-And-Ors.-v.-State-of-U.P.-and-AnotherDownload