How many husbands are murdered by wives in India? We will never have the accurate numbers since Crimes Against Men by Women is not recorded by NCRB.

In yet another #HusbandMurder reported, this time from Gurugram, a woman along with her accomplice has been arrested for plotting and executing the murder of her husband. This case involves not just property dispute but also wife’s illegitimate affair.

42-year-old Dharmesh Yadav was married to 35-year-old Neetu since couple of decades. The duo has two children and lived in Palam Vihar at Gurugram. Dharmesh was a property dealer by profession. The couple had strained relations since past some years.

While in custody of Palam Vihar crime branch, Neetu confessed that she had planned the murder of her husband with the intention of grabbing his property and marrying her lover Babloo Khan.

Neetu then informed the officials how she had informed Babloo that Dharmesh was going to sleep at their under construction building located in Sector-22 on the night of October 29. As per information, Babloo reached there with his friend Mohammaddin and shot Dharmesh dead.

Subsequently, Babloo and his friend also removed the mobile SIMs before reaching Gurugram and also defaced the number plate of their Swift car, reported The Tribune India.

Karnal Woman Gets Husband Murdered With Help Of Lover; Has No Regrets

We have solved the blind murder of Dharmesh Yadav with the arrest of his wife Neetu and alleged shooter Mohammaddin seven days after the crime.

While main accused Babloo is still on large, we have taken Neetu on one-day and shooter Mohammaddin on 3-day remand after they were produced in a city court on Monday.

During interrogation, Neetu revealed that her plan was that after killing Dharmesh, all property would be transferred in her name and she would get married to Babloo. Before the murder, she had given 650 gm of gold to Babloo.

While police are conducting raids to nab Babloo, ACP added,

Our teams are on job and main accused Babloo Khan will be arrested soon. 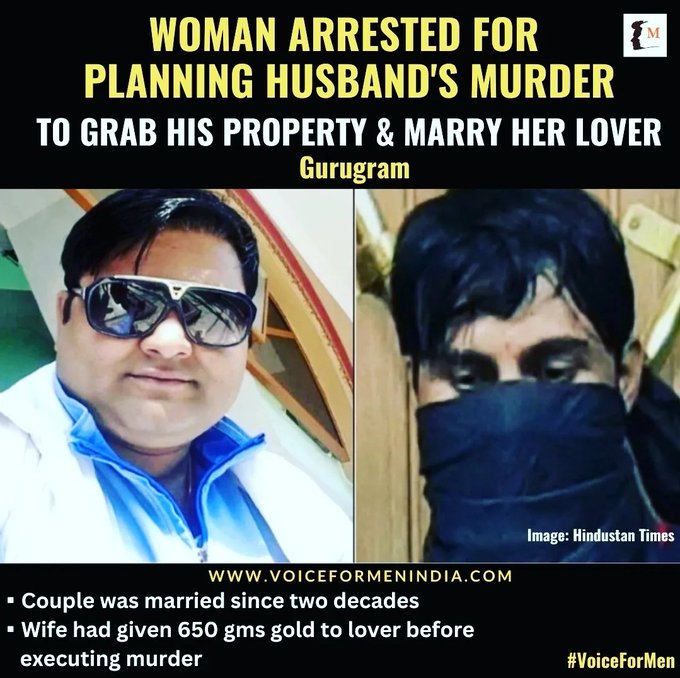