by Team VFMI
in ALIMONY, DOMESTIC VIOLENCE, HIGH COURT, IN THE LAW, IN THE NEWS, NON TIER-I CITIES
0

The Punjab and Haryana High Court in its order dated September 13, 2022 granted divorce to a man who accused his respondent-wife of taunting his physical disability, snatching his crutches, manhandling and throwing him around.

While the High Court allowed appeal on grounds of physical and mental cruelty by wife, the court also ordered the disabled man to pay permanent alimony to ‘cruel’ wife and minor son.

The appellant husband and the respondent wife were married as per Sikh rites and rituals in March 2004 at Nakodar. Out of this wedlock, one son was born in December 2004 at wife’s maternal home, where she had been residing since September 2004.

It is the case of the appellant that he is handicapped and afflicted by Polio since childhood. At the time of his marriage with the respondent, she and her parents had told the appellant that the respondent was 28-29 years old and had been married earlier but as her first husband was an alcoholic and used to beat her, thus they had divorced each other by mutual consent.

It was only subsequently that the appellant found out that the actual age of the respondent was not 28/29 years but was about 38 years, and that she had also had a child with her first husband who had died. It is further stated that only after about 8-10 days of the marriage, the respondent started insulting the appellant and mocking him publicly for his physical disability and used to tauntingly called him lula langra in front of his family and friends.

However, while leaving, the respondent cleverly and secretly took all the gold ornaments and cash lying in the house without telling the appellant, and since then the respondent had been living at her parental house. All efforts on part of the appellant to bring her back to the matrimonial home had failed. Accordingly, the appellant stated, the respondent had treated him with cruelty, and also deserted him without reasonable cause or excuse. As such, he was left with no alternative but to file the petition under Section 13 of the Act in June 2005.

In response, the respondent wife in her written reply, admitted to the marriage as well as birth of the child yet denied that she had treated the appellant with cruelty. She stated that her first husband was alcoholic and used to beat her and it was thus that they had parted ways by mutual consent. The respondent further stated that her parents had spent handsome amount on her wedding and had given gifts and dowry articles to the appellant and his family including T.V., fridge, gold ornaments, utensils, beddings etc. Despite this they started demanding more dowry from her and her family, and used to ill treat her. She denied insulting the appellant or calling him ‘lula-langra’.

Respondent alleges that in the month of October 2004 when she was pregnant she was turned out of the matrimonial home by the appellant and that upon birth of the child no one came to see the newly born child even though intimation regarding birth was sent to the appellant and his family. All the medical expenses relating to the delivery were borne by the parents of the respondent.

She further stated that Panchayat consisting of respectables, including her brothers, tried their level best to rehabilitate the respondent, but without any result. Ultimately on 7.5.2005, the respondent was sent back with the appellant, but again after a few days the appellant misbehaved and demand Rs1 lakh from the respondent and on 15.5.2005 she was again turned out of the matrimonial home with the minor child.

Respondent stated that since then she is living with her parents and appellant has filed divorce petition by levelling false allegations against her.

In 2010, Additional District Judge, Hoshiarpur, rejected husband’s petition of divorce on grounds of ‘cruelty’ and ‘desertion’ under Section 13 of the Hindu Marriage Act, 1955.

The appeal in the High Court was then filed by the appellant-husband against this order. Matter remained pending since 12-years.

The Punjab and Haryana High Court heard both the parties and after examining the evidence, held that the respondent had inflicted both ‘mental’ and ‘physical’ cruelty upon the appellant. The division bench of Justice Ritu Bahri and Justice Nidhi Gupta observed,

Taunting a person for his handicap, and pushing him around to throw him on the ground when he is helpless and unable to defend himself, constitutes the most inhumane kind of cruelty which can be meted out to any disabled person; and the respondent’s such actions amount to her inflicting both physical and mental cruelty on the appellant.

Accordingly, the findings of the ld. ADJ, Hoshiarpur in this regard are held to be erroneous and contrary to the evidence on record, and are as such, reversed.

The High Court further noted that ADJ, Hoshiarpur had erred by remaining silent on testimonies of the many witnesses which testified to the ill-conduct of the respondent. The Court also noted that the rejection of the contentions of the appellant merely because he could not specify the date and time of such acts of cruelty, was erroneous.

Granting divorce to the husband under Section 13 of the Hindu Marriage Act, 1955, the High Court concluded,

Though we have held that the acts of the respondent-wife amount to cruelty against the appellant-husband, we are, however, not oblivious to her requirements, and that of the son born of the parties’ wedlock. Accordingly, we direct that the husband shall pay to the wife a sum of Rs 15,00,000 (Rupees Fifteen Lakh only) as one time permanent alimony and she will not claim any further amount at any later stage; and a sum of Rs 10,00,000 (Rupees Ten Lakhs only) shall be paid to their son Navjot. This amount be paid within six months from today.

The judgment and decree dated 21.4.2010 passed by the learned Additional District Judge, Hoshiarpur, is set aside. The petition for divorce filed by the husband under Section 13 of the Act is decreed and the marriage of the parties solemnised on 3.3.2004 is dissolved by a decree of divorce.

Besides the above alimony payment, it must be noted that the appellant-husband had been regularly without fail paying maintenance for the minor son as determined from time to time, while the child remained in sole custody of wife. 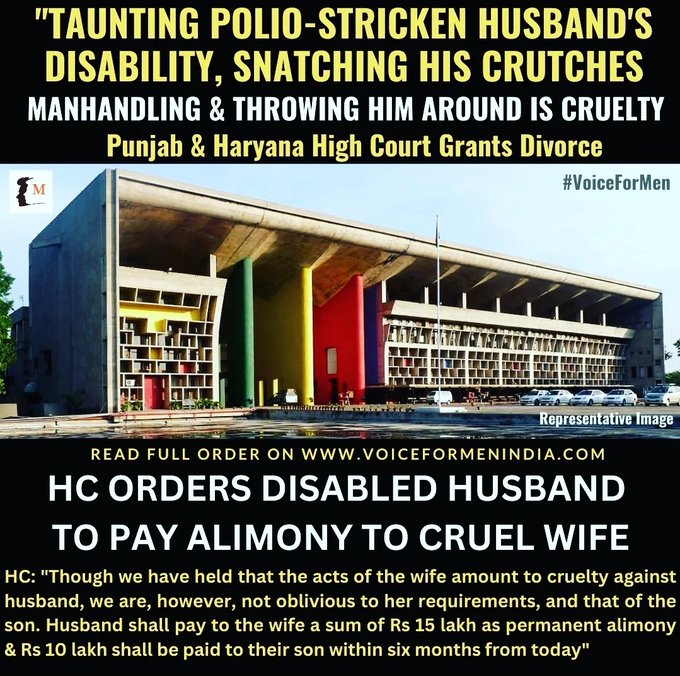