Unbelievable and Shocking! A 15-year-old girl in Chhattisgarh’s Raipur allegedly stabbed a differently-abled man to death….because he ‘couldn’t hear her honking’, while the accused thought he was ignoring her.

The minor was riding a two-wheeler and attacked the hearing-impaired victim, who was on a bicycle, after he did not respond to her horn, police said.

The incident took place in Kankalipara area on Sunday.

40-year-old Sudama Lader, was on a bicycle when 15-year-old girl was riding a scooter with her mother. She repeatedly honked in a bid to overtake the victim, however, he could not hear her.

The girl thought that he was ignoring her, so she stopped her scooter and started shouting at the man.

The girl then allegedly stabbed the man in the neck with a knife that she was carrying. He was rushed to the nearest hospital, but he died on the way.

The girl then sped away leaving her mother at the site. She was detained in the Mandir Hasaud area and the weapon used in the crime was also recovered from her, police said.

Leave your thoughts on this case below. What is giving young girls so much confidence to murder? Is it the lack of fear of gender biased laws?

▪️Accused girl left her mother behind on the murder spot, while herself fled with the scooty#CrimeHasNoGenderhttps://t.co/AEKO1ZJAKB 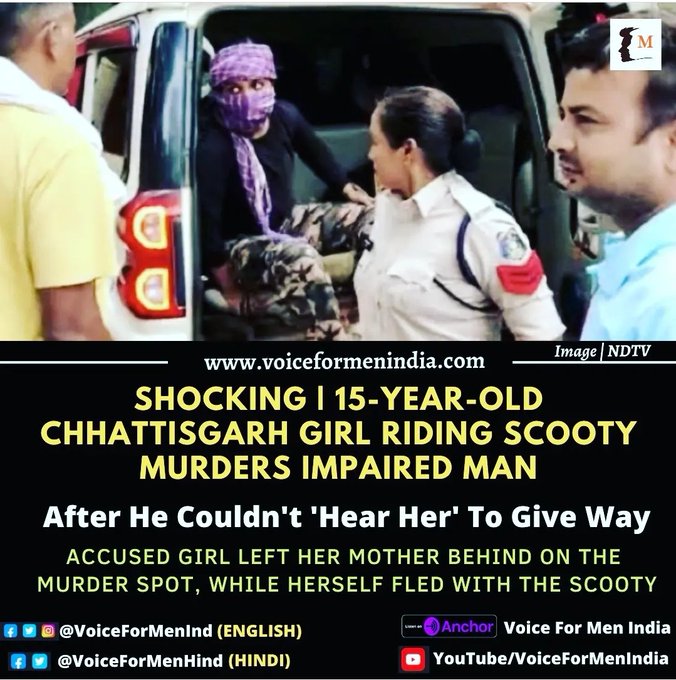