THIS MORNING show aired a rather unusual segment today as Eamonn Holmes and Ruth Langsford met a woman who wanted to marry a dog. If that wasn’t bizarre enough, the ceremony then happened live on ITV, and viewers were confused.

The bride, Elizabeth Hoad had appeared earlier in the show where she had confessed that she did not need a man and  wanted to spend the rest of her life with her golden retriever, Logan. She discussed her love life where she said she was fed up of men. She had gone through the drill many a times through online dating sites and others, but had failed to find that perfect one.

A mother of a 25-year-old boy, Hoad married Logan at the end of the show. The ceremony took place, with former Love Island winner Kem Cetinay acting as Logan’s best man, while Alison Hammond officiated. Host Eamonn Holmes walked Elizabeth down the aisle, with her wearing a cream dress and huge floral fascinator. 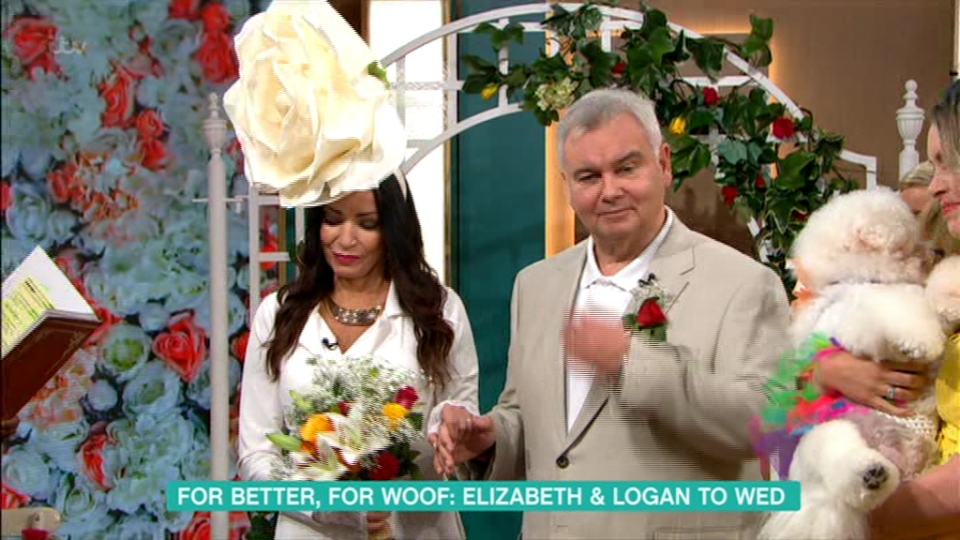 Alison then read out doggy-themed vows while struggling not to laugh, saying,

If any persons here present has a bone of contention, as to why they may not be joined together, I will now paws to let them speak, bark, now or forever hold their peace.

They then exchanged rings, with Logan receiving a bracelet on his paw as Alison continued,

Do you Elizabeth take Logan to be your very own pedigree chum?

The bride then delivered her vows before sealing their union with a customary kiss on the mouth for Logan, who licked her face in return.

Viewers at home just couldn’t believe what they were seeing, and took to Twitter to vent out their views.

The world is going to hell in a handcart!!! Get the woman some help instead of promoting this idiocy. The dog obviously doesn’t understand what’s going on. The honeymoon should be errrrrrr interesting and possibly illegal.

Not to be a killjoy, but seriously something wrong with this woman. Why are people giving this woman 5 minutes even? she needs serious help. It’s like that ghost lady all over again.

You’ve reached a whole new low. I’m absolutely disgusted that you regard your viewers with such contempt that you think this is is acceptable to broadcast. It’s cringe worthy. Shame on This Morning and all involved in this x