Madhya Pradesh Congress MLA Umang Singhar has been charged with rape and domestic violence case by his ‘wife’. The MLA has also been charged for unnatural sex and criminal intimidation.

On the other hand, Singhar, who has been a former state minister has denied the charges accusing his wife of framing him in false cases.

The MLA is Congress’s national secretary. Singhar, who is a powerful tribal politician and a three-time MLA, is the nephew of former Chief Minister Jamuna Devi. He was the forest minister in the previous Kamal Nath government and currently represents the Gandhwani seat.

Last evening, the local police registered a case against Singhar on charges of raping and assaulting a 38-year-old woman.

Speaking with media, Dhar’s Superintendent of Police (SP) Aditya Pratap Singh said that they received a complaint by a woman, who claimed she was living with the accused MLA as his ‘wife’ and alleged that he sexually assaulted her. Singh said,

His wife also accused him of owning assets in the name of their house help’s husband. She alleged his involvement in the suicide of his live-in partner Sonia Bhardwaj, for which the MLA was charged in Bhopal a year ago.

Singhar has denied the charges and claimed that his wife had been blackmailing him. In his defence, the MLA said,

On November 2, I filed a police complaint against her for mentally harassing and blackmailing me. She threatened to frame me in a false case and demanded Rs 10 crore. A case has been lodged.

State Home Minister Narottam Mishra said the MLA has had “other wives” in the past as well. He quoted,

Former minister Umang Singhar’s wife has accused him of rape on the pretext of marriage and mental harassment. He had other wives in the past, according to the police. A case has been registered at Naugon police station.

MP Congress Committee’s media department chairman K K Mishra told PTI that he does not have information about the case but prima facie, it seems to be a “politically motivated” case.

▪️@UmangSinghar: "On Nov 2, I filed police complaint against her for mentally harassing, blackmailing me. She threatened to frame me in false case"https://t.co/FdiwNJr4Wo 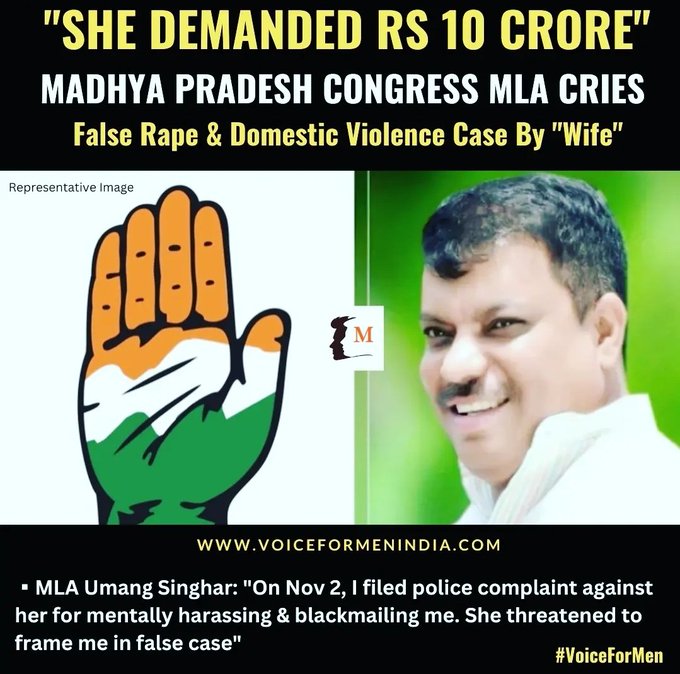