READ ORDER | Except Bihar, Consent From All States Have Been Received With Regards To Shared Parenting: Union Of India Counsel To Punjab & Haryana HC

by Arnaz Hathiram
in HIGH COURT, IMPACT ON CHILDREN, IN THE LAW, IN THE NEWS
0

READ ORDER | Except Bihar, Consent From All States Have Been Received With Regards To Shared Parenting: Union Of India Counsel To Punjab & Haryana HC

In a significant order dated December 09, 2022 (RAJNISH SHARMA VS. KAMAL KUMAR), learned counsel for Union of India has submitted that except State of Bihar, consent of all the States have been received and procedure for putting up this matter before the Union Cabinet is in process.

A direction is given to the Union of India to expedite this process as this amendment is necessary keeping in view the large number of pending matrimonial disputes, where the children are the worst sufferers.

This Court has been examining the children, who faced agony while appearing before the Family Courts as well as before this Court. The children go through a trauma of many years at tender age of growing up.

They are helpless and this Court has been appointing Ms. Garima Sharma, a Psychologist/Counsellor, as Amicus Curiae, who has given her opinion that some of the children even cannot see eye to eye and scared of meeting their separated parents, whether it is mother of father.

The bitterness between the parents causes a personality disorder. In the larger interest of the families facing matrimonial litigations, High Court has amended Family Court Rules, whereby counsellors shall be appointed to assist every Family Court in districts.

Keeping in view the above fact, amendment in the Guardianship And Custody Laws In India, as recommended by the Law Commission Report, 2015, requires immediate implementation.

Read full order at the end of this article.

Another Order From Punjab & Haryana High Court on Shared Parenting

In a different order dated that also came in December 2022, the Punjab and Haryana High Court once again pressed on the urgent need to adopt Shared Parenting as a standard practice, to ensure normal upbringing of children whose parents are separated and fighting divorce battles.

Justice Ritu Bahri and Justice Ashok Kumar Verma made it clear that the concept of shared parenting could be suggested to the “parties” when they approach the police for lodging complaints alleging cruelty and other offences.

The direction came after the Bench observed that the court was seized of a number of cases in which a child’s emotional and psychological requirements were not being properly taken into account while deciding the divorce petitions filed by the parents under the Hindu Marriage Act, reported The Tribune.

The concept of shared parenting can be extended at the initial stage, when parties approach the police station.

The bench of the high court cited an example where it said,

A child came to the HC on December 10, 2021, along with her mother. Crying, the child stated she did not want to lose the company of both the parents. As the parties were from Sonepat, a direction was given that both the parents will take the child to a counsellor at Sonepat.

The appellant (father) had approached the court against order dated October 3, 2018, passed by the Gurdaspur Civil Judge (Senior Division), whereby he was given visitation rights to meet the minor child every third working Friday.

In its order, the Bench also asked the amicus curiae, Divya Sharma, to assist the court on the “kind of infrastructure required for solving the problems of children where parents are seeking separation”.

The Bench said the parents would not have to travel for years to the courts, if the concept of shared parenting was advised at the initial stages. Referring to the Law Commission’s report of May 2015, the Bench asserted it had been observed that a child had the birthright to meet his parents and grandparents.

It was further observed in the report that several disputes could be resolved through mediation. But professional assistance might be required in the case of mediation as neither the court, nor the mediators, were qualified to understand child psychology. The bench concluded,

A time-bound resolution is a key factor to achieve the objective of ensuring that the welfare of the child is met.

READ ORDER | If Petitioner Is Mother Of Child, She Should Not Forget Respondent Is Doting Father; Bombay High Court Grants Overnight Child Access To Husband

READ ORDER | Except Bihar, Consent From All States Have Been Received For #SharedParenting: Union Of India Counsel To Punjab Haryana HC 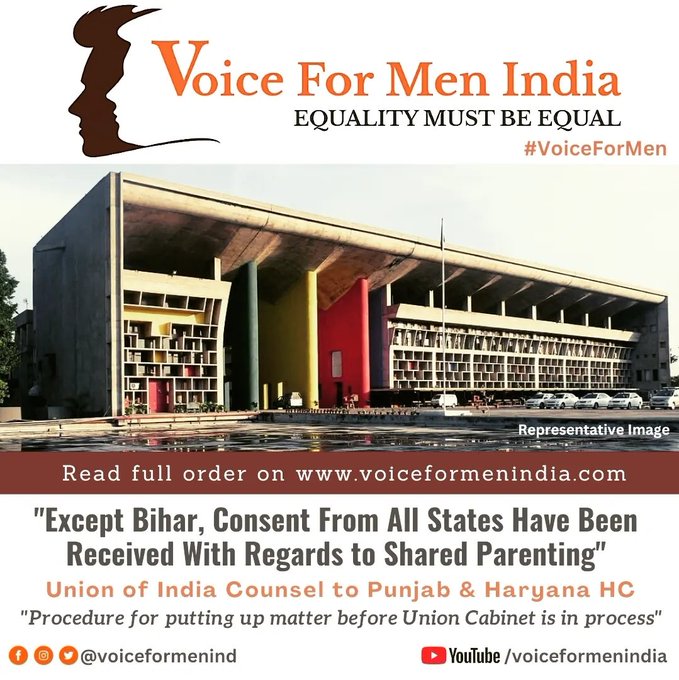 “I Am Not A Kidnapper, I Am Just A Father Pleading To See My Son” | Manoj Dhankhar (Punjab)