While Supreme Court of India has been giving enough indications to criminalise marital sex on word of wife (also referred to as Marital Rape), the Delhi High Court in its order dated September 16, 2022 has quashed a Rape FIR against a man by his girlfriend, whom he had subsequently got married to.

What sounds like an absolute mockery of rape laws, is that while quashing the FIR, the high court has ordered the accused man to provide hygienic and good quality burgers to two orphanages.

The complainant woman was married to the petitioner (accused man) and, thereafter, decided to part ways due to temperamental differences.

However, prior to their marriage, in 2020, the woman had filed rape charges under Section 376 IPC against this man, who was then her boyfriend.

The couple have reached a settlement at the mediation centre now.

Justice Jasmeet Singh noted that both the accused and the complainant were married to each other and the matter was more like a ‘matrimonial dispute’ and now the two had reached a settlement.

This turns out to be matrimonial dispute which was preceded by registration of FIR u/s 376 IPC. The offence u/s 376 IPC is not permissible to be settled through mediation but we are considering the peculiar facts and circumstances of the case that initially parties were in relationship with each other.

The FIR was registered u/ s 376 IPC, which as stated was filed due to ill-advise and misunderstanding, thereafter parties married with each other. However, they again drifted apart and decided to part their ways. Therefore, this settlement is being entertained in mediation centre.

I am of the view that in the present case, respondent No.2 (woman) was married to the petitioner and, thereafter, had temperamental differences due to which they decided to part ways. Moreover, the respondent No.2 has herself made the statement that she wants to put quietus to the matter without any pressure, coercion and out of her own free will. In view of this, the allegations under Section 376 IPC can be quashed.

Justice Singh also remarked on how valuable time of the state had been wasted in this case. He remarked,

Considerable time of police and judiciary has been wasted which could have been utilised for other important matters and, therefore, the petitioner must do some good for the society.

The Delhi High Court noted that the petitioner was running Burger restaurants in Noida and Mayur Vihar. Thus, the Court ordered him to provide good quality burgers to two orphanages having at least 100 children each.

The high court also directed the police to ensure that the burgers were well-made and cooked in a safe and clean environment following Covid protocols. 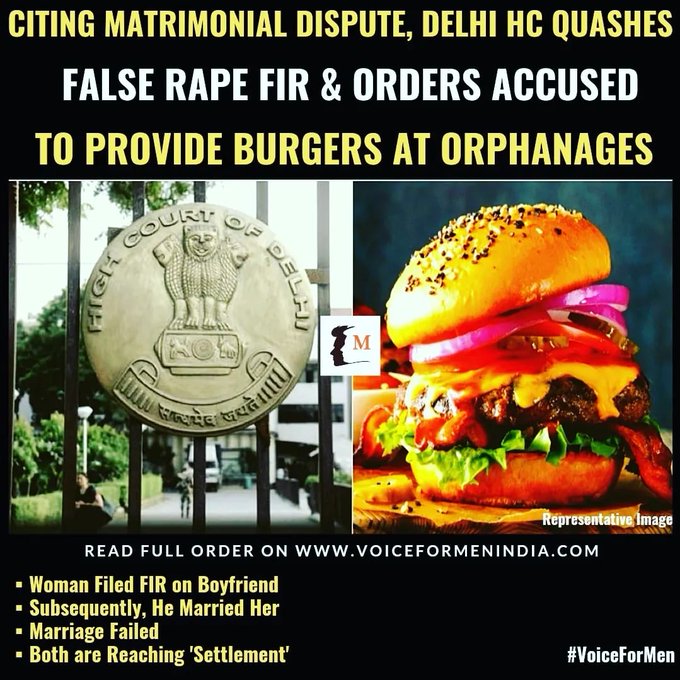