The Bombay High Court in its order September 27, 2022 quashed an FIR or rape and cheating registered against Binoy Kodiyeri, son of CPM former state secretary Kodiyeri Balakrishnan, after the accused paid Rs 80 lakh to the complainant woman as ‘settlement’.

In 2019, a Mumbai-based woman, who is originally from Bihar, had approached the Oshiwara Police station to register an FIR alleging rape and cheating by Binoy. In her FIR, the woman stated that the two had been in a relationship since 2009 and also had a child together.

According to the woman, their relationship nurtured when she was working at a dance bar in Dubai in 2008.

The woman said that she became pregnant in 2009 and Binoy had moved her to a flat in Andheri West, Mumbai, and on July 22, 2010, their son was born. She said that Binoy used to take care of her, paid the rent for the accommodation and till 2015 and send her money every month.

In 2018, the woman learnt that Binoy was already married. However, the ‘Rape’ FIR was filed against Binoy, after he allegedly stopped paying her maintenance to take care of their minor child.

DNA of the Child

The sessions court in Mumbai had ordered Binoy to undergo a DNA test to check whether he was indeed the child’s father. The court had subsequently granted him pre-arrest bail in the alleged rape case.

On July 29, 2019, the Bombay High Court had directed Binoy to provide a sample of his blood for a DNA test as per an order passed by a sessions court in Mumbai.

As per a report by The News Minute, a division bench of the Bombay High Court, in July 2022, had earlier refused to hear the mutual application filed by Binoy and the woman seeking to end the court proceedings.

However, once again public prosecutor Sangeeta Shinde, counsels Rishi Bhuta and Ankita Bamboli for Binoy, as well as advocate Prashant Pophale for the complainant woman, approached the high court to quash the FIR, as the matter had been “amicably settled”.

The bench of Justices R P Mohite-Dere and S M Modak was informed that Binoy had paid a settlement amount of Rs 80 lakh, following which the woman had withdrawn the rape charges.

The complainant, who was present in the high court, was asked by the court if she was voluntarily accepting the settlement terms. When she confirmed the same, Binoy’s petition was disposed off by the high court.

The consent terms filed before the high court mentioned that the relationship was consensual and both parties were adults.

▪️Woman learnt that accused was married after a decade with him
▪️Rape FIR was filed when Man stopped paying maintenance#FalseRapehttps://t.co/1tCERsvRIP 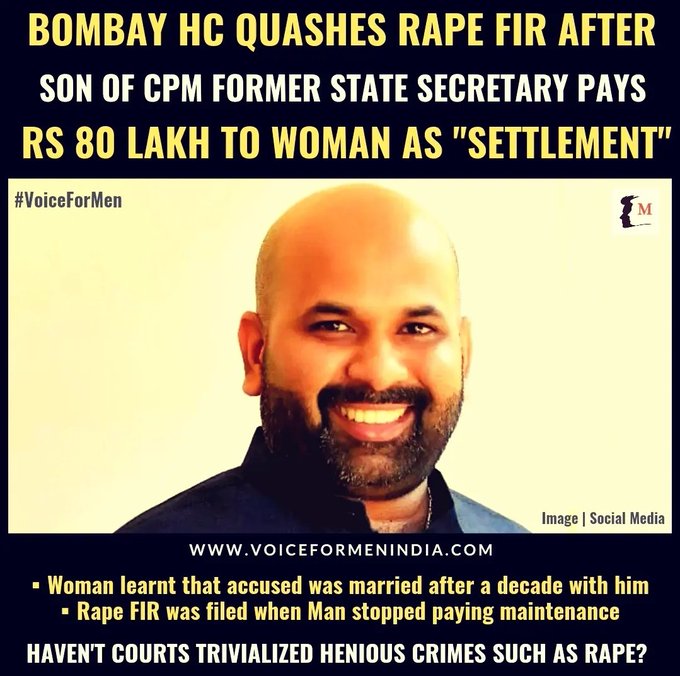