The Aurangabad bench of the Bombay High Court in its judgement dated September 30, 2022 held that a woman, who leaves her matrimonial house before her divorce, cannot later seek “right to residence” under the Protection of Women from Domestic Violence Act, 2005 (DV Act) – even if her appeal against the divorce decree is pending.

The matter pertains to a woman demanding right to residence in her in-laws’ home, including right to access electricity, bathroom, toilet, etc. in the house.

Couple got married in June 2015, and the wife left her matrimonial home in April 2016 (less than a year) and has been largely residing in her parental home since then. The matrimonial home is a shared household and in the name of husband’s parents.

Husband filed for divorce in 2016, and the marriage was dissolved by lower court in 2018. Wife’s appeal challenging divorce is pending.

In the interim, in 2017, wife filed Criminal Misc. Application against the applicants (in-laws) and her husband in the Court of learned 3rd Judicial Magistrate, First Class, Udgir under the provisions of the Protection of Women from Domestic Violence Act, 2005 (DV Act).

The learned Magistrate in the said DV application granted interim maintenance of Rs 2,000 per month to the wife and also granted an amount of Rs 1500 per month for her residential accommodation from her husband in its order dated November 2017.

This order, too, was challenged by the Wife.

Learned Additional Sessions Judge in the order dated February 2018, modified the earlier order and instead of providing monthly amount of Rs 1500 to the wife for her residential accommodation, granted permission to the her to occupy the aforesaid shared household with immediate effect.

Learned Counsel for the applicants (in-laws) pointed out that after their daughter-in-law started residing in the shared household, there was settlement between her and their son, and both had shifted to Pune to live as a nuclear family. However, thereafter also, in-laws accused their daughter-in-law of continuing with her rude behaviour as earlier, and also left the house of Pune willingly and started residing with her parents at her maternal house.

The applicants prayed that the marriage was already dissolved by lower court, and the daughter-in-law was contesting her right to shared household only to harass them.

Learned counsel for the respondent daughter-in-law pointed out that considering the scope of Domestic Violence Act, 2005, the aggrieved person i.e. the wife has every right to reside in the shared household, despite there being a decree of divorce passed against herself. He pointed out that it was the in-laws and her husband who harassed his client and ultimately drove her out of the house.

He pointed out that the wife has also challenged the divorce decree, being obtained by fraud, by way of appeal which is still pending. As such, he prayed for dismissal of both the applications.

Single-judge Justice Sandipkumar More quashed the order passed by a lower court that granted right to residence to the wife in her in-laws’ household.

The judge noted that Section 17 of the DV act allows right to residence but the same is only when the woman continues to reside in the shared household before the divorce. The bench remarked,

As such, Sakshi (the divorced wife) cannot take resort to the earlier residence order when her marriage with her husband has been dissolved by a divorce decree passed by the Court having proper jurisdiction and especially when she had already left her shared household four years back.

Under the circumstances, she is not even entitled for the relief of restraining dispossession since she is not in possession of the shared household.

READ ORDER | Senior Citizen Has Right To Reside In His Own House; Son & Daughter-in-Law Are Licensees At Best

On wife’s submissions that her divorce appeal was yet pending, the High Court said that mere pendency of an appeal will not come into way of the present applicants for challenging the order passed by the Magistrate. The bench concluded,

Therefore, I come to the conclusion that she being a divorced wife, is not entitled to claim residence order or implementation of earlier residence order in the light of changed circumstances i.e. after her subsequent divorce for occupying the shared household after leaving the same long back and prior to her divorce.

I am of the opinion that the Magistrate has definitely erred in directing the applicants to provide one room to her in the shared household. 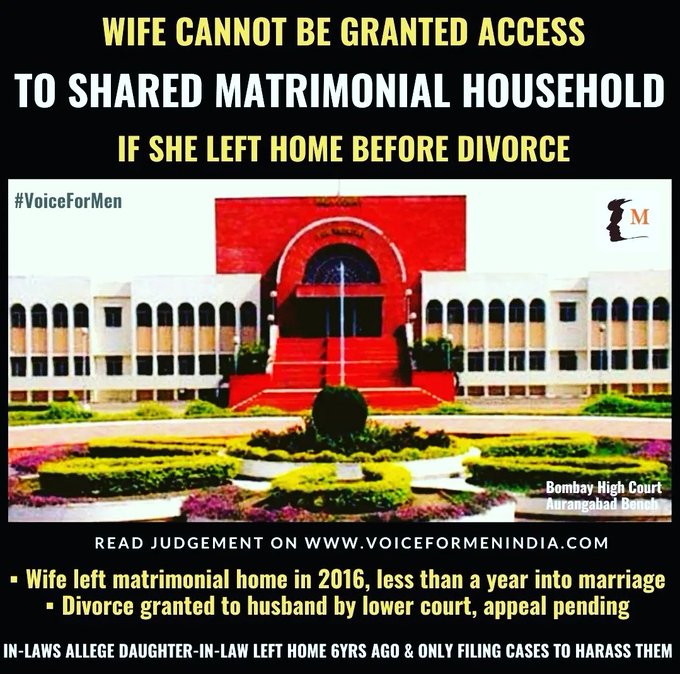