READ JUDGEMENT | If Husband Did Not File For Restitution Of Conjugal Rights, Does Not Mean Wife Didn’t Desert Him: Chhattisgarh High Court

READ JUDGEMENT | If Husband Did Not File For Restitution Of Conjugal Rights, Does Not Mean Wife Didn't Desert Him: Chhattisgarh High Court (Representation Image)

The Chhattisgarh High Court in its order dated September 06, 2022 granted divorce to a husband after his wife refused to co-habit with him despite a decree under Section 9 of Hindu Marriage Act for restitution of conjugal rights passed in his favour.

The High Court set aside a Family Court order, which earlier refused to dissolve the marriage, despite the wife having stayed with husband only for few days after marriage.

Parties were married in 2013, however, the wife soon returned to her maternal home. In 2015, when the husband obtained a decree for restitution of conjugal rights requesting the wife to return, she refused to do so and made vague allegations of dowry harassment.

Post marriage in November 2013, as per the ritual known as “Chauti Bidai” , four-five people from wife’s family came and took her along with them and advised the husband to come after 15 days to take the wife back.

Therefore, it is the contention of the husband that without any sufficient cause the wife has deserted the husband and all the efforts to bring the wife back failed. Thereafter, when the wife did not joined the company of the husband, he filed an application under Section 9 of Hindu Marriage Act, 1955 (for short ‘ Act of 1955’ ) for restitution of conjugal rights.

The respondent/wife filed the written statement and it was alleged that because of torture and demand of dowry she was forced to stay away and she has not deserted the husband and denied all the allegations made .

It is further contended that she informed about the torture to the family members but she was advised to adjust herself, but eventually she could not do so because of the torture meted out to her and consequently she had to leave her matrimonial house. Therefore, it is stated that the wife has not deserted the husband.

In 2017, the Family Court of Baikunthpur, District Koriya dismissed the divorce petition on the ground of desertion filed by the husband (appellant herein).

A bench of Justices Goutam Bhaduri and Radhakishan Agrawal went through the details, evidences and witnesses on record. Referring to the Supreme Court Judgement of Bipinchandra Jaisinghbai Shah v Prabhavati, the High Court initially analysed, ‘What is Desertion’. The bench noted:

Desertion is the separation of one spouse from the other, with an intention on the part of the deserting spouse of bringing cohabitation permanently to an end without reasonable cause and without the consent of the other spouse; but the physical act of departure by one spouse does not necessarily make that spouse the deserting party.

Subsequently, the bench made it clear that the husband’s failure to put the decree to execution (RCR) does not forgo the wife’s act of desertion. It observed,

Simply for the reason that the husband did not put into execution the decree of section 9 of the Act of 1955, the inference cannot be drawn that the husband actually did not want the company of the wife. On the contrary, the facts would show that the wife has deserted the husband prior to 2 years from the date of filing of the application of divorce.

The High Court observed that the wife had only made “bald statements” with respect to dowry harassment. Moreover, when the wife, even after knowing that order of restitution of conjugal right has been passed, did not return to the matrimonial house, which suggested that she had no intention of living with the husband.

Allowing the husband’s appeal and granting him divorce, the Chhattisgarh High Court concluded,

Under the circumstances, we are of the view that the judgment and decree of the learned Family court is liable to be set aside. Accordingly, we allow the appeal and in consequence it is ordered that the marriage in between the appellant/ husband and the respondent/ wife dated 28.11.2013 shall be dissolved by decree of divorce.

READ JUDGEMENT | If Husband Did Not File For Restitution Of Conjugal Rights, Does Not Mean Wife Didn't Desert Him: Chhattisgarh HC 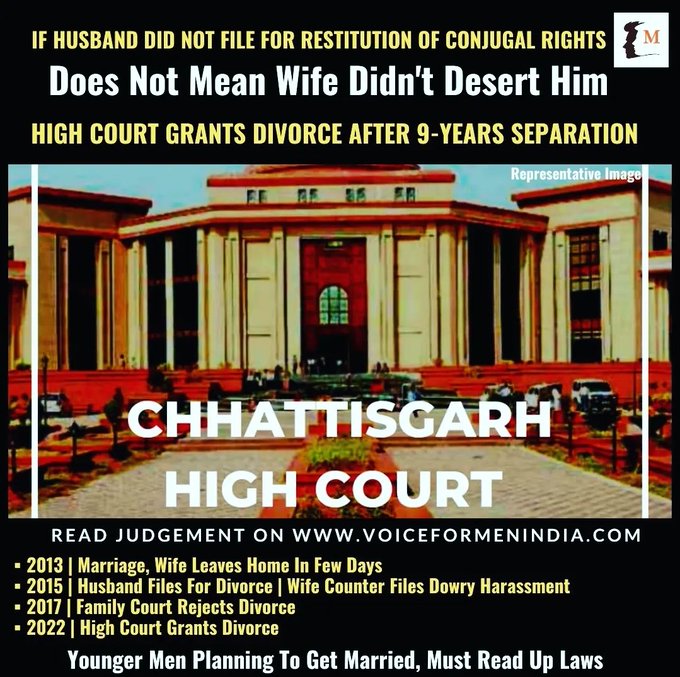 Interview | Importance of Making a WILL for Men fighting Divorce