by Team VFMI
in DOMESTIC VIOLENCE, HIGH COURT, IN THE LAW, IN THE NEWS, NON TIER-I CITIES
0

READ JUDGEMENT | If Husband Did Not File For Restitution Of Conjugal Rights, Does Not Mean Wife Didn't Desert Him: Chhattisgarh High Court (Representation Image)

If a husband is harassing his wife in any which way, the woman has ample laws in her favour to get relief from such a man almost instantly. However, whenever genders are reversed, the only and only recourse a husband in India has, is to file for divorce (civil case).

The relief from court may often take several years and decades and in the interim, the wife may herself resort to filing multiple cross cases on the man.

In one such case of cruelty against husband, the Chhattisgarh High Court has upheld divorce to the man, after several years of wife contesting the same.

Parties got married in 2010. Husband is 2-years younger than his wife, who was a widow at the time of their marriage. The couple has a child out of this wedlock.

It is alleged that the wife used to spent money as per her own choice and the visit of the husband to his parents was objected & eventually stopped. It is stated whenever he wanted to visit his parents, the wife used to abuse him resulting into husband cutting off ties with his parents.

It was further alleged that without the consent and permission of the husband, the wife went to a place called Belpahad for her business at Mahanadi coalfield for the business of coal shifting and when the husband tried to intervene, he was abused and insulted. The respondent/husband further alleged that the wife used to take away his entire salary and spend it on her business and if he would question her about the expenses, she reciprocated with more abuses.

It is alleged that the wife procured 5 vehicles on loan without the consent of the husband and she deliberately stopped to discharge her household responsibilities including taking care of the child.

It is further alleged that at one occasion the wife had surreptitiously stolen away valuable papers which were kept in the car, and same was proven through CCTV. Subsequently, the wife was arrested in a criminal case.

It is stated by the husband that the wife used to abuse him and bald allegations were made against the husband.

Learned counsel for the respondent also submitted that the wife not only did character assassination of the husband by accusing him of an extra marital affair, but she also went to the extent of going to his office to create a scene and also sent letters to the Chief Minister for his transfer. He would further submit that even the allegation of illicit relation with the cousin sister was also made when she came to their house to appear in an examination, which would show the mental status of the wife

Thus, he sought decree of divorce.

The wife in turn contended that she had never misbehaved with the husband and has not committed any cruelty.

She further stated that the husband knowing fully well that she is a widow, the marriage was performed. She further alleged that because of the wish and will of the husband, she underwent a surgery to conceive the child and thereafter child was born. It is further stated that after birth of the child, the behaviour of the husband became strange and for some reason or the other he wanted to separate. Therefore, on false allegations and grounds, the application for divorce was filed by him.

The learned family Court after evaluating the facts & evidence, allowed the application of the husband, thereby decree of divorce was granted in 2019. Being aggrieved by such judgment and decree, the present appeal is by the wife.

The Chhattisgarh High Court in its order dated August 18, 2022 upheld the decree of divorce to the husband. The bench of Justice Goutam Bhaduri and Justice Radhakishan Agrawal made several observations as under:

The Court was of the view that abusing in-laws, stopping the husband to meet his parents, and forcing the husband to leave the marriage function of his younger brother are also unnatural cruel acts as such acts would bring down the image and the prestige of a family in the public hike, which may also amount to cruelty.

Analysing the evidence before them, the Court came to the conclusion that the appellant/wife used to abuse the husband on trivial issues of which the husband made complaints many times to the police and he also reported the rash and abusive behavior of his wife.

Observing that the act of a wife visiting the office premises of the husband and creating scenes with abusive language amount to cruelty.

When a wife goes to the office premises of the husband, abuses him and accuses him of certain relation, naturally it would result into diminishing the image of the husband before the colleagues and the office stature will certainly go down.

The Chhattisgarh High Court thus concluded that the judgment and decree passed by the Family Court did not require any interference. Divorce was upheld.

▪️"Stopping husband to meet his parents, forcing him to leave marriage function of his younger brother are unnatural cruel acts"https://t.co/WAMm7GZFr3 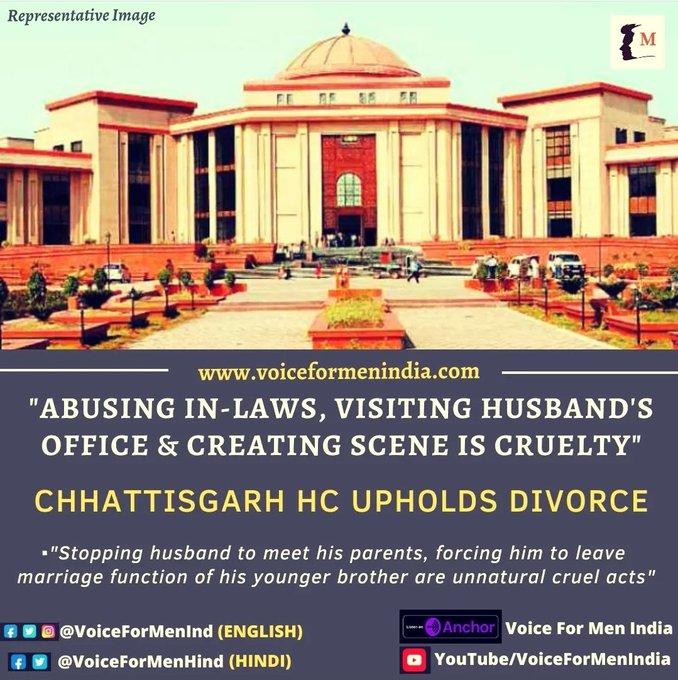