In the past few days, you would have seen minute by minute update in media on the unfortunate Tunisha Sharma suicide case. However, sadly cases which do not get TRPs never even make it to mainstream media….at the most you will read about such stories in a small corner of a newspaper and forget about the same.

In one such ill-fated incident reported from Mohali in Punjab, a family of three – husband, wife and their son – died by suicide on December 23. According to the suicide note, deceased husband had blamed his in-laws for harassment.

Suresh Kumar (55) was married to Anjana Sharma and the couple lived in Mohali’s Sector 48-C along with their son. As per an Indian Express report, Anjana had not been keeping well, and thus her family allegedly used to constantly blame Suresh for her poor health condition.

After the suicide, an official complaint was filed by Suresh’s elder brother Ramesh Kumar sharing:

On Friday, December 23, Anjana called and informed me that Suresh had consumed some substance. I took my brother to GMCH-32, Chandigarh, where doctors declared him dead.

Ramesh then shared contents in the suicide note which stated,

I read the note and my brother blamed his in-laws for the suicide.

According to Ramesh’s complaint, after he completed legal formalities, he contacted Anjana but her phone was switched off. He tried his nephew’s phone but that was also switched off. Ramesh said,

I went to their home and found that they were lying unconscious in the room. I took them to Civil Hospital, Phase- IV, where doctors declared them dead.

Acting on Ramesh’s complaint, the Mohali district police booked five people, including three women, on December 25 on charges of abetment to suicide. However, the accused, who are from Rohtak, Haryana, are yet to be arrested, since matter is under investigation.

Other Side Of Beti Bachao | Sonipat Family Dies By Suicide Due To Alleged Harassment By Daughter-in-Law, Her Family

▪️Five members of wife's family have been booked: Her Father, Mother, Brother, 2 Sisters
▪️No arrests as on December 25, 2022#VoiceForMen https://t.co/OL6omOHpPM 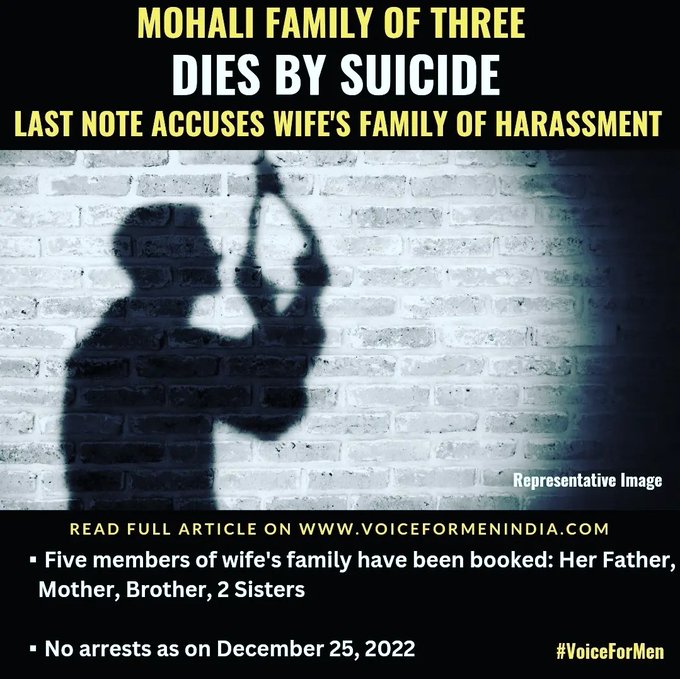