Man Files Police Complaint Against Wife, Father-in-Law For Allegedly Blackmailing Him With Photographs Of His Private Parts; Booked

by Team VFMI
in CRIME HAS NO GENDER, HIS STORY, IN THE NEWS, SPEAK UP MEN
0

Man Files Police Complaint Against Wife, Father-in-Law For Allegedly Blackmailing Him With Photographs Of His Private Parts; Booked (Representation Image)

Matrimonial disputes can get very ugly. While society loves to believe that only a woman can be a victim of threats and intimidation by husband and in-laws, below case demonstrates the extent of cruelty inflicted by wife and her family over the husband.

In a recent case reported from Mumbai, a woman and her father have been booked for allegedly blackmailing the husband with his private photographs. While an FIR has been lodged, arrests are yet to be made.

Couple got married in January 2022 and soon started having fights over trivial issues.

The 37-year-old husband works with a pharmaceutical company and lives in Borivali East. His wife is an IT professional.

In July, the husband was confronted by his wife about his love affair before marriage. He told her that he was not in touch with his former girlfriend, but his wife insisted on checking his cellphone.

Later, in August, the couple went to Mahabaleshwar for a holiday, where after an argument, the wife informed him that she had got hold of all his past chats backed up on his WhatsApp. She said she had taken screenshots of his conversations with his former girlfriend and pictures of his private parts that he had sent her.

The husband lodged a complaint of defamation with Kasturba Marg police against his wife and his father-in-law, for allegedly blackmailing him with photographs of his private parts retrieved from an online chat that he had with his former girlfriend. In his complaint the husband said,

My wife started to blackmail me saying she would show the screenshots to my parents and relatives and tarnish my image. I had a huge fight with my wife over the issue on October 3.

The husband also shared, that he later learnt his wife had shared the screenshots with her father. Adding to the complaint, he stated,

On October 3, I received a message from my father-in-law where he taunted and threatened me. He said I would go to jail and that he would put up a banner on the gate of my housing society and carry out a procession.

Leave your comments below on this case:

#Mumbai: Man Files Police Complaint Against Wife, Father-in-Law For Allegedly Blackmailing Him With Photographs Of His Private Parts 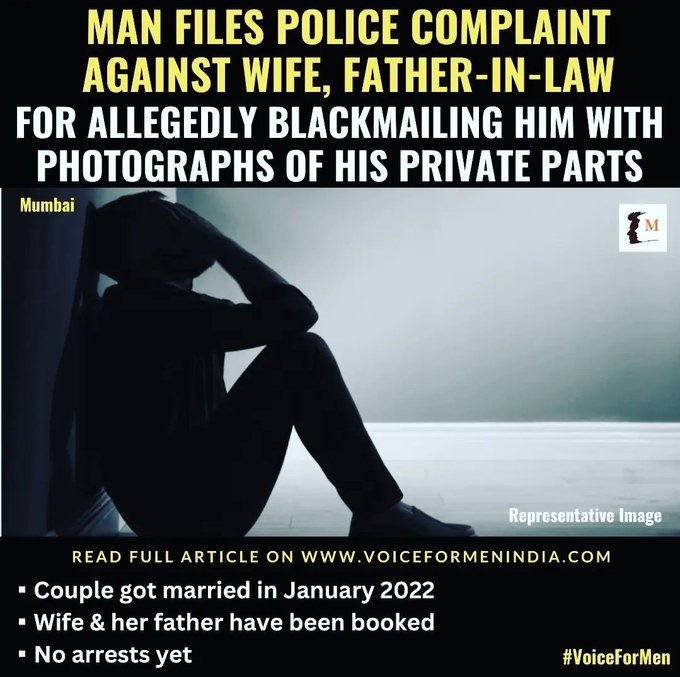 How Should Men React In Such Situations? #SpeakUpMen