"I Was Forced To Take It In My Own Hands...For this my wife, mother-in-law and..." | Bengali Actor Saibal Bhattacharya Attempted Suicide Case (Image: Social Media)

Saibal, who is known for his role in the Bengali serial Prothoma Kadambini, was found at his residence and is now in hospital, as per a news report.  However, he was rushed to the hospital and is alive.

As per media reports, the actor shared a video of himself in a hurt state on Facebook. Saibal was reportedly upset with his professional life as he was not getting work. He was suffering from depression and also struggled with substance abuse, as per a report, which said the actor hit himself with a sharp object on Monday night.

I was forced to take it in my own hands. For this my wife, mother-in-law and…’

…the video cut off before he could finish speaking…

As per a report in Anandabazar Patrika, Saibal was allegedly found at his Kasba home in south Kolkata before being admitted to Calcutta National Medical College and Hospital.

As per the Kolkata Police, Saibal injured himself in an inebriated condition. He was immediately rushed to the Hospital. Reportedly, prior to attempting suicide, Saibal took to his social media handle on Monday night to share a video (which has been retrieved now) where he allegedly blamed his wife and in-laws for his condition.

Saibal is a popular actor and essayed the role of father and uncle in various shows. Apart from acting, he would also write scripts and dialogues.

"I Was Forced To Take It In My Own Hands…For this my wife, mother-in-law and…" | Bengali Actor Saibal Bhattacharya Attempted Suicide Case#VoiceForMen #SpeakUpMen #SuicidePrevention https://t.co/VcMlyOdZLP 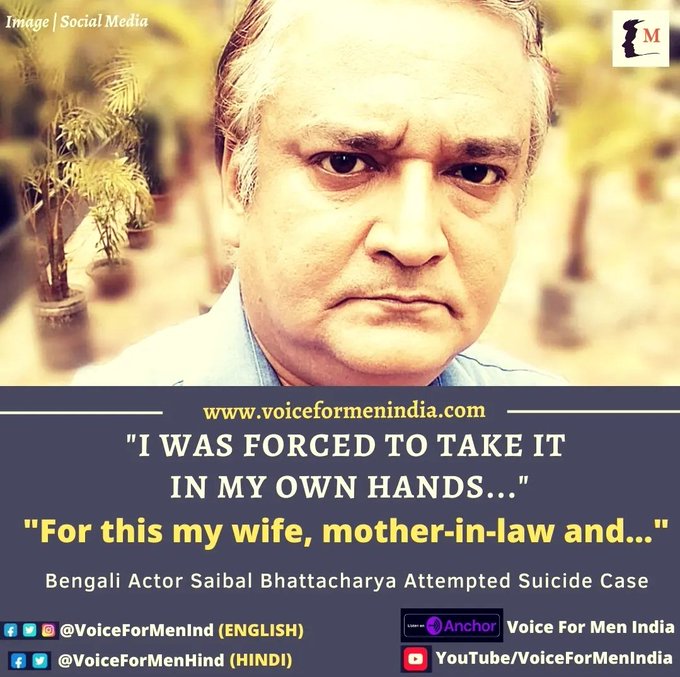