Wife Turned Accident Into Her Attempt To Die By Suicide | Mumbai Court Acquits Husband, His Parents From 498A IPC After 9-Years (Representation Image)

Gender Equality is only a war cry when it suits the women. The same is manipulated and moulded best with the help of Gender Biased Laws to project women as perpetual victims of patriarchy.

In a recent order that came from a local court in Mumbai, a husband has been ordered to pay maintenance to his estranged wife – despite him earning less and she earning more.

The wife, now 47-years-old, had left her matrimonial home in 2015 and filed a domestic violence complaint before the magistrate’s court. She also accused her husband of adultery.

In his submissions before the court, the husband, a 52-year-old Ghatkopar businessman, denied the allegations. He claimed that he had sent the woman notices asking her to come back and cohabit with him but she had refused. Subsequently, the man filed for divorce. He denied the woman’s claims for maintenance.

The husband had moved the sessions court after a magistrate’s court ruled in favour of the wife.

The man claimed that while his estranged wife and his adult sons stayed in a “posh” apartment for which she was paying a rent of Rs 26,000 a month, he was living in an transit camp and using common toilet. He further told the court that both his sons too were earning more than him.

The financial position of the wife is more sound than the husband. In 2015, the wife left the company of the husband without any reason.

The woman, however, alleged that her husband was earning at least Rs 1 lakh a month.

The Mumbai Sessions Court said the observations of the magistrate in the order was proper and legal.

Observing that a woman’s right to claim maintenance cannot be denied only because she is employed and her husband earns less than her, the sessions court ordered the husband to pay a monthly maintenance of Rs 16,000 to his estranged wife.

The sessions court cited a Supreme Court ruling which said that even if the wife is earning, she is entitled for the determination of maintenance. The Court remarked,

Therefore, the submission of arguments from the side of the husband that his wife is an earning woman and she is not entitled to maintenance goes out.

It further observed that at present, the husband had no liabilities except his own expenses. The Court concluded,

He is also running a business and has other properties. Therefore, he is certainly entitled to pay maintenance as well as rent to the wife till the pendency of the domestic violence application.

Prima facie, the income of the husband seems to be less than that of the wife. But a wife is the responsibility of her husband. He is liable to maintain her whatever he earns. Therefore, the order does not require any interference. 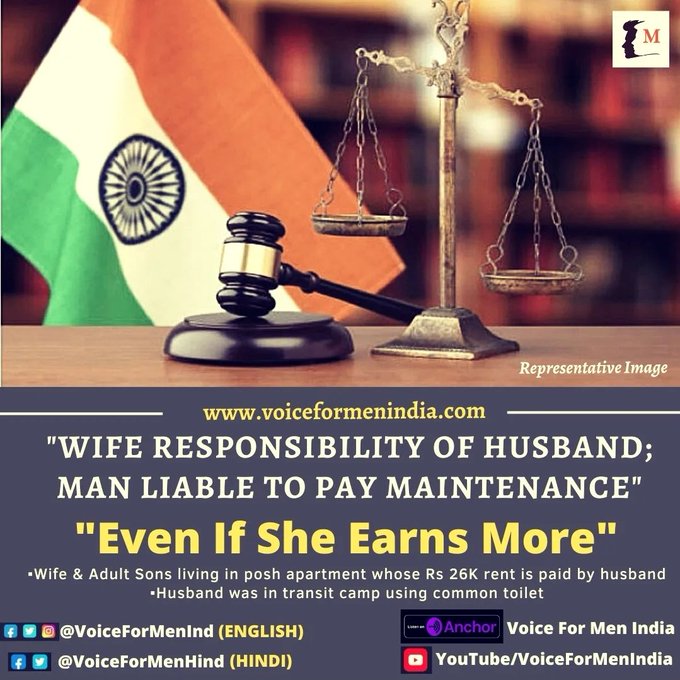