by Arnaz Hathiram
in GENDER STORIES, IN THE SOCIAL
0

Our Boyzzz Played Well……….Haven’t we heard this several times from Team Captains and Players of not just Men in Blue, but also various other countries? “Boyz” is an absolutely acceptable and sporting term to address adult men who represent their respective teams.

No one for decades ever had a problem.

Why Did Harsha Say “Sorry” To Gender Extremists?

Harsha Bhogle is an Indian cricket commentator who has not been spared by mindless criticism and wokeness – also referred by us as feminism 10.0.

Amidst the ongoing Deepti Sharma controversy, Bhogle on September 30, took to twitter and expressed,

I find it very disturbing that a very large section of the media in England is asking questions of a girl who played by the laws of the game & none at all of another who was gaining an illegal advantage and was a habitual offender. That includes reasonable people & I think it is a cultural thing. The English thought it was wrong to do so & because they ruled over a large part of the cricket world, they told everyone it was wrong.

The colonial domination was so powerful that few questioned it. As a result, the mindset still is that what England considers wrong should be considered wrong by the rest of the cricket world, much like the “line” the Aussies say you must not cross having decided what the line should be which is fine in their culture but may not be for others. The rest of the world is no longer obligated to think the way England does and so we see what is so plainly wrong. So too the notion that turning tracks are bad but seaming tracks are fine. The reason I say it is cultural is that it is what they are brought up to think. They don’t think it is wrong.

The problem arises and we are guilty of it too, when people sit in judgement of each other’s approach. England wants the rest of the world not to like running out batters at the non-striker’s end and have been vitriolic and abusive towards Deepti and others who have done it. We come hard too asking others to wake up from centuries old colonial slumber. The easiest thing is to play by the laws of the game & stop worrying about subjective interpretation of the spirit of the game, stop forcing opinions on others.

The law says the non-striker must be behind the crease till the bowler’s arm is at its highest point. If you obey that, the game will move along smoothly. If you point fingers at others, like many in England have at Deepti, you remain open to questions asked of you. It is best if those in power, or who were in power stop believing that the world must move at their bidding. As in society, where judges implement the law of the land, so too in cricket. But I remain disturbed by the vitriol directed towards Deepti.

Despite Harsha coming out strongly in favour of Deepti, our hyper equal rights champions had a major major issue with him referring to Deepti as a…“GIRL”. Read up again…..and you read that right!

The very next day, someone like Harsha who is highly educated, well-read and who has covered sports for decades, was almost compelled and pressurised by feminists to apologise for using the term GIRL, instead of WOMAN. In his tweet dated October 1, Bhogle wrote,

Some women have reached out to tell me that my choice of the word “girl” in a recent tweet could, even if unintentional, as it was, be offensive. I am sorry and thanks for telling me. I am putting this in the public domain so that other men are aware that it could hurt. Thanks.

Here are some interesting tweets by social media users who have mocked the ridiculousness of feminists, who seem to have completely gone berserk in the name of sexism and misogyny.

MESSAGE FROM VOICE FOR MEN INDIA

Someone like you apologising for such mindless criticism, only boosts up confidence of these wokes!

Dear @bhogleharsha, Someone like u apologising for such mindless criticism, only boosts up confidence of these wokes#VoiceForMenhttps://t.co/ClgEXIdmv2 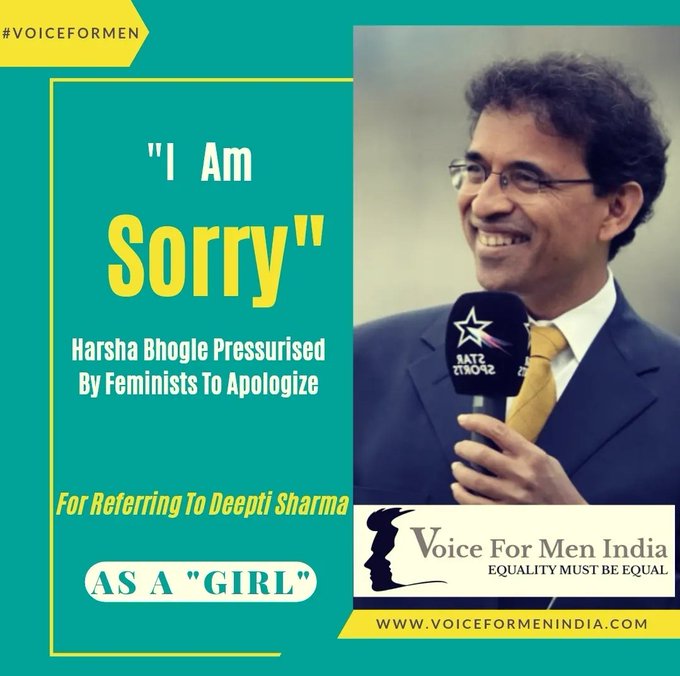 How Did Twitteratis React?

"Inshallah, boys played well"??? Who tf has the time and fragility to be offended by such shit? https://t.co/NYTXBFcRgU

This is such fucking bullshit man. You can't even begin to count how many times 'boys' is used in sports, and I assure you, not one dude gives a fuck. How can your egos be so fucking fragile. Get a grip honestly https://t.co/1pxrCdI7o3

I am an adult and I will be offended if someone calls me woman, pls call me a girl 😂😅 https://t.co/MuEu5e8nCj

What on earth is this nonsense! Are we seriously going to act like snowflakes now? This is ridiculous! https://t.co/ot8YfqiSrL

I'm sorry but this is rather unnecessary. Cricket playing men are referred to as 'boys' and I'm sure Harsha didn't use the word 'girls' in a condescending manner. People need to educate themselves on the context of a usage before trying to apply their blanket PC rules over it. https://t.co/GoEA7Bd8kc

Nothing to apologise for. The word 'boys' is used for the men's team. How is this any different than women's team ?

Woke mob with their silly gender pronoun nonsense should stop.

All these trivializes and makes redundant the important struggle we women go through everyday. https://t.co/Ni7eVJWpzm

How is that offensive? Women are just straight up annoying sometimes.

No boy/man/guy on my TL ever got offended with me calling the men's team as my "boys". https://t.co/kYKE8V2YjB

Hain? How’s the word ‘girl’ offensive when used in reference to a girl? https://t.co/VA0mZ5RKqV

This guy is the Karan Johar of cricketing world. Rightly slapped by Dhoni & AB once. Thankfully isn’t in cricket administration else we would have trans players playing for BCCI https://t.co/H7mKSnyf4T

Bad enough fragile and jobless people have time to take offense… But what's with the apology? Diffusing the situation is one thing, but caving in to loonies is plain timid. https://t.co/FJMcDa9dlP

Classic example of "a woman is woman's biggest enemy". Things have gone from nobody noticing women's cricket to having controversies and intense debates. And here we have some idiots who are worried about calling her a girl. Talk about the bigger picture and woke shite. https://t.co/sJe5BXQIDP

Sad that some 'women' even pointed this out to someone like @bhogleharsha who is brilliant with words himself !

What a load of crap! This unnecessary wokeness of nothing is more serious than a bloody pandemic! https://t.co/P6GtR7Jdtx

Unfortunately, social media snowflakes have incredible power when it comes to cancel culture and hence we will continue to see tweets like this.