DID YOU KNOW? Congress Veteran Bhupinder Singh Hooda’s Son Deepender Hooda Was Charged Under Section 498-A IPC In 2004 | Read Details

Section 498-A was introduced in the year 1983 to protect women from cruelty and dowry harassment by husband or any member of his family. However, over the years and decades, even after joint families turned nuclear, the law has not been modified till date. Effectively, this draconian law has become a tool in the hands of disgruntled women, who want to settle score with their husbands and in-laws.

The Supreme Court of India and several other High Courts have termed this law as ‘Legal Terrorism’ or a law misused as a weapon than shield for disgruntled wives.

While common men struggle running for anticipatory bail, some politicians too have faced similar situations, which they alleged to be manipulated.

In the year 2004, just before the onset of Lok Sabha Elections that year, Congress Veteran Bhupinder Singh Hooda’s son Deepender Hooda was charged 498A and 406. Not just Deepender, but Leader of Opposition representing Haryana Congress Bhupinder Hooda, his wife Asha, Deepender’s sister Saroj were all booked under the same sections, for allegedly demanding dowry from Deepender’s (former) wife Geeta Grewal.

As per a report by The Telegraph published in January 2004, an officer at Panchkula police station informed media,

We have received a complaint and lodged an FIR against Hooda, his wife Asha, (Geeta’s) sister-in-law Saroj and (Geeta’s) husband Deepinder under various sections, including 498A and 406. We will take action soon.

In her complaint, 24-year-old Geeta had alleged that her in-laws had been demanding money from her family despite the latter having spent Rs 25 lakh on her marriage. The FIR stated that Rs 10 lakh was spent on the tilak ceremony and a Rs 5 lakh fixed deposit receipt was given to Deepender, who then worked in the US.

She alleged that the Hoodas were demanding Rs 60 lakh and a Mercedes from her father.

While speaking with the media, Geeta then said,

I have said whatever I wanted to in the FIR and have nothing more to say.

There was no official response from the Hooda family at that point in time.

However, a Hooda aide rubbished Geeta’s allegations and questioned the haste with which the Panchkula Sector 19 police station had registered the case. He said,

The demand of Rs 60 lakh came not from us but from the family of Geeta to settle the divorce proceedings currently being heard in a Rohtak court. The family had threatened to spoil Hooda’s political career in case the demand was not met.

The Hoodas had filed an FIR of their own over this demand.

39-Yr IIT-IIM Grad Commits Suicide, Due To Demand Of Apartment Plus Rs 50 Lakhs From Wife, In-Laws

DID YOU KNOW? Congress Veteran Bhupinder Singh Hooda's Son @DeependerSHooda Was Charged Under Section #498A In 2004

▪️Hoodas: Demand of Money from Woman's side to settle divorce proceedings"https://t.co/9dX5MfUwEW 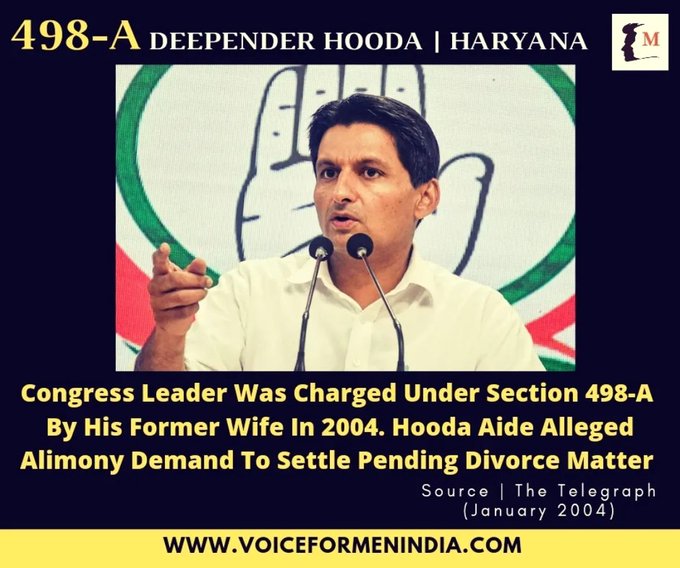